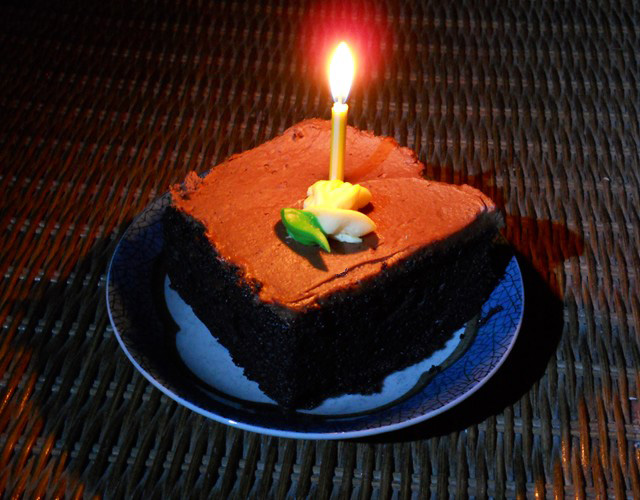 
Back in the day, I used to go to the Old Home Pond on Wednesdays after work.  I'd have dinner with Momzerduck, watch a little tv with her or something like that, then either sleep in the guest room or drive back to Pond Central.  On the nights I'd crash there, in the morning we'd have breakfast, work the crossword puzzle, then I'd head off to work with a couple of tuna sammiches she'd make me for lunch.  Often, our tv viewing would be an episode of MST3K, and there'd usually be one stretch where we'd have to pause the videotape because she was laughing so hard.

On Wednesday, January 23rd, 2008, I was heading over there, but I had wanted to take her out to dinner instead.  See, her birthday would be the coming Saturday, but she'd be out of town with Ph.Duck, I believe it was, so this would be the closest I could come to a "birthday party" for her.  Unfortunately, she wasn't feeling up to it, so that afternoon she called and asked if I could bring dinner over.  Well, surely... what would she like?  "Chinese from Smiley Wok."  Oh.  Really?  Nothing fancier than that?  "Nope, that's what I want."  Well, okay.

That night was cold and ick, the roads all sloppy slush.  On the way to Smiley Wok, I had an idea and pulled into the parking lot of a grocery store.  In there, I purchased a "cake for two," some paper plates, and birthday candles.  Eventually I got the Chinese takeout... probably beef & broccoli for me, and something with mushrooms for her... and made my way to the Old Home Pond.  I let myself in, hid the bag o' cake n' stuff in the living room, and took the takeout into the dining room.

After we had eaten, and made fun of the fortune cookies as was our wont, I told her to stay put and got the cake ready... put a candle in it, lighted it, and carried it into the dining room, all the while singing "Happy Birthday to you, happy birthday to you...."  That's when I realized: Momzerduck was crying.  I made a lame joke ("I know I'm not that good a singer..."), but she kept on crying for a few seconds before explaining:

She had never had cake for her birthday before.  When she was growing up, times were rough and something like cake was an expense easily done away with.  After that, for one reason or another, cake never seemed to be involved with her birthday.  To be sure, there had been celebrations... at work, or with Ph.Duck, or whatnot, but she said there had never been cake.

At which point, I thought of all the birthday events she had done for and with me... and always there had been whatever type of cake I wanted.  Cheesecake, usually.  Only in recent times, when we went to a sushi place for my birthday, had there not been cake.  I thought of how much she had given up for me, and vowed then and there that she would never want for cake on her birthday again.

In 2009, she spent her birthday in Chicago with Ph.Duck, which would have been better than any cake to her.  By the time her next birthday came around, the liver disease had taken her from us.

But there is still cake on her birthday.