*UGH:  Did you think 4Time Vettel would ease up on the rest of the field now that he'd won the driver's championship?  Oh heavens, if only that were the case.  The lights went out, polesitter Mark Webber had one of his patented Lousy Start®s, and suddenly Vettel found himself in the lead out of Turn 1... a lead he would never relinquish.  Down at the other end of the field, Kimi Raikkonen, who had been excluded from Quals, decided that he could win the race in the first turn.  He tried to fit his Lotus underneath the Caterham of Giedo Van Der Garde, into a space that was going away even before he turned in.  This unwise move cost the Finn his front suspension.  However, he did get a jump on traffic back to the hotel. 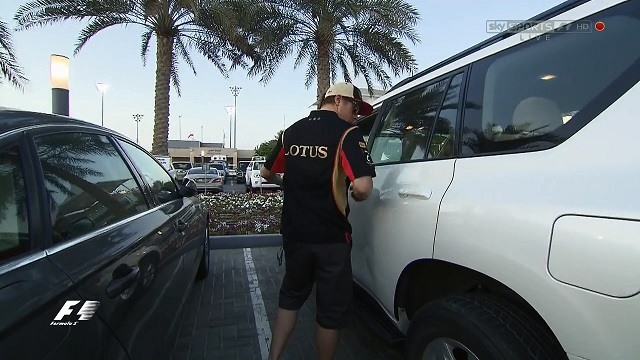 There are already people baying and lowing about his leaving the circuit before the race was over, but c'mon, really?  What exactly could he do to help matters?  Give advice on how to handle the front straight?  How not to take Turn 1?  Support the team?  Considering the way this weekend has gone for the Raikkonen/Lotus relationship, I wouldn't be shocked to hear (in a few years) that he did it on purpose.

*ZZZZZZZZZ:  As the sun disappeared over the Yas Marina circuit, due to both planetary rotation and solar eclipse, 4Time Vettel made the sport ridiculous. 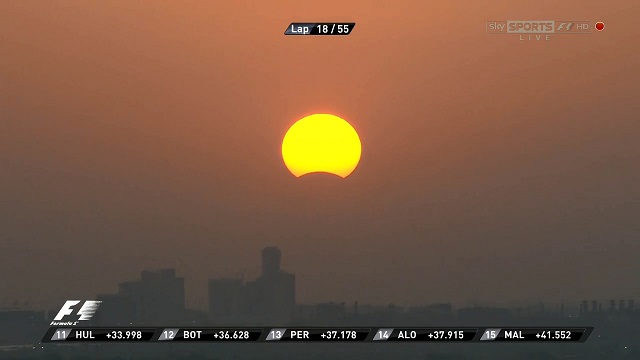 At one point, Red Bull's champion had a 43 second lead over his teammate in second place.  There was one stretch of time where he was two seconds a lap faster than anybody else on track.  We'd like to chalk it up to the rest of the field getting an early jump on 2014, but there's still too much to play for... no, 4Time just killed everything possible today.  It may have been the most dominating drive we here at F1U! have ever seen... and it was also ridiculously boring.

*OWTCH:  In the race's endgame, HWMNBN had just made his second pitstop and came charging out of the pit tunnel with a full head of steam.  Toro Rosso driver Jules Vergne had worn tires and held 7th place, but the Ferrari driver wanted the place badly.  Problem was, Vergne couldn't hold his racing line, drifting somewhat into the path of HWMNBN.  The Spaniard was forced to take to the off-track pavement.  His return was... exciting. 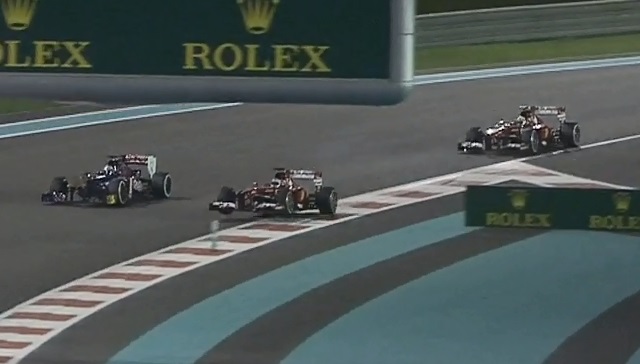 There had been complaints about the curbing at Yas Marina all weekend, and in almost the same place during Quals, Shiv Hamilton broke the rear suspension on his Mercedes.  HWMNBN's Ferrari got some good air and returned to earth with a 28G thump that set off the shock alarms that require a mandatory visit to the hospital.  Usually this happens immediately; that sort of force is usually caused by an accident, after all.  In this case, HWMNBN was complaining of some back pain but finished the race. 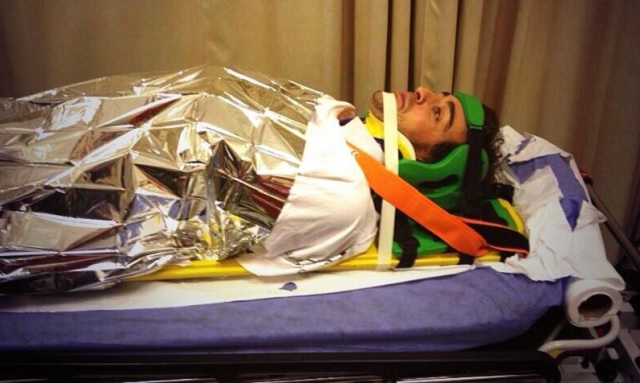 Afterwards, he was transported to the hospital strapped to a backboard, as seen in this picture released by his agent.  At no time was he unconscious... heck, he drove the rest of the race, finished in 5th and had the fast lap of the race.  Still, there is some question as to whether he'll be allowed to drive at the US Grand Prix.

*NOTE:  Vettel's win keeps open the possibility of tying two major F1 records.  This was his 11th race win in 2013... if he wins out, he'll tie Slappy Schumacher's 2004 season with 13 wins.  In doing so, he'd also tie Alberto Ascari's record for consecutive victories, nine.  Like it or not, we're watching something special here.

Next race is in two weeks, right here in the good ol' USA!  See you then!

1 I dunno. I mean, okay, yeah, it's fun when they're racing for position down to the wire - but holy jeebuz, Vettel. The only reason he didn't win that race by a minute was his engineer on the horn every two or three laps telling him to back off the pace a little.

I'm kind of getting what people are complaining about with the DRS, though. It takes some of the strategy out of the game when you can reliably count on passing anyone who you can catch up with. Still not sure that I prefer a parade, though...

2 I think you should call him "Fourple".

3 Not loli enough to be called Ple...

4 What's loli got to do with it? It's the next step in the progression: double, triple, fourple...

5 Gundam ZZ reference, sorry. Not your cuppa, and frankly I've never watched it either...