F1 Update!: Mexico 2016 The weather at Mexico City's Autodromo Hermanos Rodriguez was basically perfect for a F1 race.  Mix in the drama of a last-gasp championship fight between teammates, and you should have a recipe for a tense, dramatic race.   What we got was an example of everything wrong with Formula 1.  THIS is your F1 Update! for the 2016 Grand Prix of Mexico!

*CAVALCADE OF ERRORS:  The confusion began right at the beginning of the race.  Polesitter Lewis Hamilton won the drag race to the first turn, mostly because his teammate Nico Rosberg was having to defend against the Red Bull of Embryo Verstappen.  To do so, he wound up bumping wheels with the Dutchman and having to take evasive action.  But that little action was overshadowed by the more obvious faux pas made by Hamilton.  He locked up a tire trying to make the first turn... and failed.  Instead of attempting to regain the track, he went ahead and kept right on going. 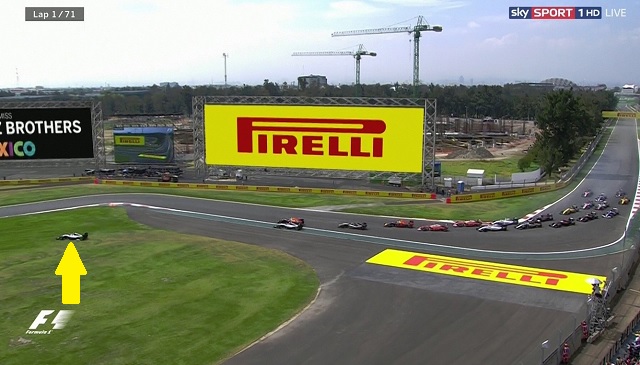 This is known in most circles as "blowing the turn."  In some others, it's called "agricultural racing."  In a tiny amount, it's known as "Susan", for reasons we do not wish to contemplate.  In any case, when one blows a turn that dramatically, a driver is usually instructed to give up any advantage gained.  For example, if by Susaning you actually pass an opponent, you have to give up the position.  In this case, Hamilton was told no such thing.  While he was in the lead approaching Turn 1, and thus gained no positions by his offroading, he did open quite the gap to second.  Indeed, he didn't slow down until a Virtual Safety Car was called out for an unrelated incident.  No penalty given, nor even considered.

*ERRORS (CONTINUED):  The race settled down to the usual Mercedes - Mercedes - Red Bull format, in this case Hamilton, Rosberg, Verstappen, with Seb Vettel in fourth.  Indeed, Hamilton was never in danger of being caught at any time and would go on to win the race with nary a worry.  However, Rosberg, Verstappen, Vettel, and Smiley Ricciardo would not be quite so fortunate.  At one point, Verstappen took advantage of traffic up ahead to make a move for second on Rosberg, but blew the turn and Rosberg took the position back.  In effect, this allowed the Ferrari of Vettel to close the gap so he could attack Verstappen.  Behind them, Ricciardo was in position to take advantage of any mistake, but not quite close enough to force a move.  After the Ferrari driver had lined up Verstappen, he made a strong effort to take third as they raced down to Turn 1 with only a couple of laps to go.  It looked like he had pulled it off when the Red Bull locked up and carried straight on.

Verstappen just kept on going, rejoining the track ahead of Vettel and keeping third place.  Remember what we said about "relinquishing the position"?  This was a textbook case of that principle, about as clear-cut as it could possibly be.  A furious Vettel would take to the radio waves, screaming that he had to give up the spot.  In fact, it went so far that the German took to swearing at Race Director Charlie Whiting via radio after the race was over.  But that was still a couple of laps in the future.

*ERRORS (YUP ONE MORE):  Only a few moments later Smiley Ricciardo tried his luck at passing Vettel.  On one hand, both stayed on track.  On the other hand, Vettel did some rather dodgy moving around in the braking zone, eventually interweaving tires with the Red Bull. 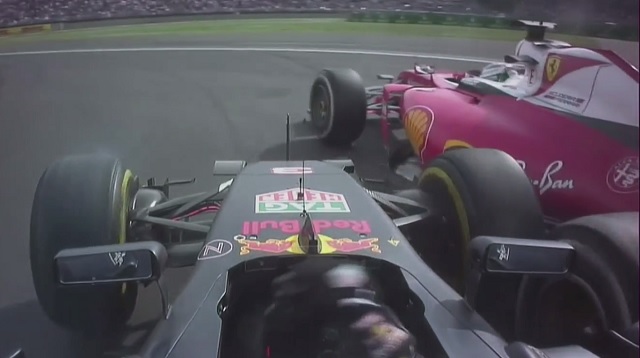 Mind you, this was after the two bumped wheel hubs.  How one or the other didn't wind up launching into low-earth orbit through this sequence was beyond us.  In the end, Vettel held the spot, Smiley backed off, probably in fear of his life, and the race ended Hamilton, Rosberg, Verstappen, Vettel, Ricciardo.

*HOLD IT RIGHT THERE:  But we're not finished yet!  As the three podium drivers gathered in the green room before the ceremonies, a camera caught sight of Seb Vettel jogging from the garages to the podium area.  Meanwhile, a FIA official said something in Verstappen's ear and led him from the room as the two McLaren drivers watched.  Sure enough, Vettel ended up taking the third step on the podium.  It turned out that Verstappen was given a five-second time penalty for not relinquishing the position after cutting Turn 1.  This dropped him from third to fifth, behind Ricciardo.  But wait, we're not done!  Immediately after, both Vettel and Ricciardo were summoned to the steward's office to discuss their incident.  Shortly thereafter, the FIA released a statement giving Vettel a 10-second time penalty for his less-than-kosher activities defending against the Red Bull driver.  After the penalty was applied, RICCIARDO moved into third place, Verstappen to fourth, and Vettel ended up in fifth.

*AWFUL:  So why was Verstappen penalized for doing the same thing Hamilton did?  The general response has been "because Hamilton did it on the first lap."  To be sure, first laps are hectic... back when F1U! did "Move of the Race", anything done on the first lap was not considered... but rules should be applied evenly.  But there is one quick and easy solution to this sort of problem.  Bring back gravel traps.  Make going off-track actually cost something for the drivers.  It won't happen, particularly after Alonso's wild ride back in Australia, but it'd solve everything.

Next race is Brazil, where a victory means that Rosberg clinches the championship.  That'll be in two weeks!  See ya then.

1 Yeah, that was pretty bad, and Hamilton really should have bern penalized.
I don't think there's a good way to make that happen after the results are finalized, is there?

2 Not so it'd matter, no.  The FIA can apply a time penalty, the same way they did with Vettel's penalty, but Hamilton won by 8.5 seconds.  Verstappen got a five second penalty for doing the same thing... see what I mean?

3 So the worst they can really do is a finger-waggling write-up in Hamilton's permanent record, it sounds like? What a circus.

4 The end of that race was really ugly. The Mrs and I knew immediately that is was presumptuous of Verstappen to pull up to victory lane, but Vettel didn't cover himself in glory that last lap. At least he only waggled his finger at the kid on the final straight.

5 Let me see if I understand this:  the issue is that the driver is essentially gaining an advantage by taking an inadvertent shortcut?  I would've thought--based, admittedly, on only ever playing video game racing--that you'd lose enough ground on the slower grass that you would be more likely to LOSE position than GAIN it.
It does sound like they should've penalized Hamilton, even if it wouldn't make any practical difference.

6 In a lot of cases, of course, going off will cost you a lot of time and can easily wreck your race - the green stuff doesn't have a lot of traction, so you can't exactly pull a high-G turn in it.

What's happening here is called "cutting a chicane". Basically a chicane is a couple of turns placed in a track just to have some turns in there - something to slow the cars down and force them to do some maneuvering rather than blast through the thing at full power. If you cut the chicane, you don't do the turns and just blow through to the next part of the track, which you can do without slowing down as much as you'd need to do with the turns.

Some circuits get around this by placing physical barriers in the chicane (or at least really high say-goodbye-to-your-floorboard curbs!)