F1 Update: Malaysia 2015 We here at F1Update! want to try something new.  Our usual "bullet point style" of coverage has gotten pretty darn tiring to us since it really feels like we're just saying the same things over and over again each race.  So instead, we're going to be a little more... chatty, shall we say?  Possibly less informative, too, but nobody says we're going to stick with this style.  So THIS is your F1Update! for the 2015 Grand Prix of Malaysia... relaxed version!

As we put this together, the race was over more than a half-day ago.  Many of you will have already learned that, for the first time since Spain in May of 2013, a Ferrari driver stood on the top step of the podium.  Sebastian Vettel, in only his second race for the team from Maranello, beat the twin Mercedes of Lewis Hamilton and Nico Rosberg by roughly nine and 13 seconds, respectively.  The other Red Car didn't do too badly either as Kimi Raikkonen brought his Ferrari across the finish line in fourth after an incident-plagued race.  This was Vettel's first race win since Brazil in 2013.

Many pundits are saying that Ferrari's performance today means that they'll be challenging the Silver Arrows for the rest of the season, and that's entirely possible.  There are a few indicators that suggest that this may not be the case.  First off, the nature of Sepang International Circuit itself.  Malaysia is incredibly hot and humid when it's not raining (then it's hot, humid and raining).  At one point during race weekend the surface temperature of the track was over 160Â°F. (that's nearly £85 for those of you overseas readers!), much hotter than anybody could have possibly expected.  As a result, the Pirelli tires were suffering from blisters and higher-than-normal degradation.  There was no reason to complain, as it wasn't overly bad and everybody had the same situation anyway.  When it came to the race, Ferrari made their tires work better longer than anybody else.  It seems that the SF15-T is gentle on its tires... or gentler, at least.  Perhaps having Vettel behind the wheel helps as well.  In any case, the Red Car of the four-time world champion was able to run the race on two pit stops, while the two Mercedes had to make three... and that's the difference, right there.

Of course, there's always more to the story.  One could also say that Mercedes lost the race during Q1 and Q2 on Saturday.  With heavy rains bearing down on the circuit, the German team decided to do something they almost never do: burn a set of the softer, Option, tires during Q1 to make sure they got through to Q2.  They stayed on the Option tire again in the few laps they were able to turn before le deluge came down.  Arguably, Mercedes could have stayed true to form and run the harder Prime tire in Q1 and still progressed to the next phase of Qualifying.  Why is this important?  Because for Hamilton's last stint, when he was going to have fresher tires than Vettel and thus had the best chance to catch him, the team was forced to put him on the Prime tires because the Options they had remaining would never have lasted until the end of the race.  The Options were somewhere around 1.0 to 1.5 seconds/lap faster than the Primes, and he pitted on Lap 40 of a 56 lap race.  Hamilton finished just over 8.6 second behind... you do the math.

Another aspect of the race that bears scrutiny is Mercedes' overall strategy.  The team had decided before the race that if there was an early safety car, they'd bring both cars in for fresh rubber.  When Marcus Ericsson's Sauber pirouetted daintily into the kittylitter to summon Berndt Maylander to the track on Lap 4, Hamilton pitted from the lead and Rosberg from third.  Hamilton said later that he was "surprised" that Vettel didn't pit as well, and indeed, four other drivers did not pit either.  This put a substantial buffer between Ferrari and Mercedes once the race restarted, with the additional detriment of ending the lives of a set of Option tires early AND shifting onto the slower Prime tires to boot.  It should come as little surprise that Vettel's lead was substantial when he finally made his first pitstop on Lap 17.  He rejoined the race in third behind Rosberg, but it took only a short while for him to catch and pass the Merc... something we've seen little of in the past year, save for Silver Arrows with mechanical problems.  On Lap 25, the Ferrari driver caught Hamilton as well, though the Merc peeled off into the pits at the same time.  Vettel led pretty much the rest of the way.

This is not to say that we think this was a fluke, or Mercedes handing the race to Ferrari... far from it.  We're just not prepared to go out on a limb and say that Ferrari is going to be splitting race wins with Mercedes all that soon.  We'd like to hope they will, however. 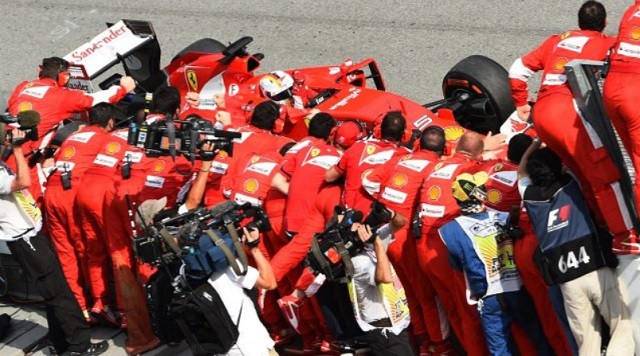 For the moment, we'll savor the joy that is a non-Mercedes, non-Red Bull victory... indeed, the last time one of those two teams didn't win a race was... anybody?  Anybody?  Ferrari, Spain, 2013.  Think about that: we've gone nearly two years since a team other than Mercedes or Red Bull last won a race.  That, loyal readers, is suboptimal for a racing series.  At least tonight, the church bells are ringing in a small town in Northern Italy.

Unfortunately for us, it's looking bleak for any other team to step up.  Red Bull had brake problems all day and never really got any pace out of their miserable Renault engines.  The two Williams were over 70 seconds back.  Neither McLaren made it the full race distance... something Manor's Roberto Mehri did manage to accomplish, placing him 15th.  There's still a long time to go, however... Manor could still catch McLaren!

The next race is in China, mid-April.  We'll see how this shakes out then.  Until that time, talk to us in the comments!

It's clear now that Hamilton made the right decision at exactly the right time when he jumped from McLaren to Mercedes.

I'm chortling thinking about the fact that HWMNBN made just about the worst decision at the worst time when he jumped from Ferrari to McLaren.

2 Thanks for the update! I almost forgot there was a race. Not sure if I'll cry about the structured format. As our blogging host, I support any format you're having a fun with.

BTW, here's a tangentially on-topic note that hopefuly amuses you... Remember a Top Gear video where Richard Hammond drives a Renault F1 car? He drove a Formula Renault for a warm-up before that. A couple days ago, I went to one of pay-to-drive places and drove a car almost exactly like that, a Formula Ford, on a twisty road course. I promptly wrecked it. So now you know: I'm worse than Richard Hammond. Fortunately, I left the track nose first, so I didn't roll and got away with bruising.

3 Pete, that'd be this clip I'm thinking.  Seeing how he pretty much drives cars while talking for a living, it surprises me not at all that he did a better job.

Excellent work at not killing yourself, by the way.  I don't know that I'd be as lucky!

4 It didn't really occur to me until now that Seb Vettel didn't win a race last year.

5 Personally, I'm a little bummed for McLaren and Button. He seemed like a gentlemanly sort of guy. In my mind, the previous F1 racer with a disposition like that was Berger, and he's not been a champion. Certainly it could be a fake facade that Button is selling to the fans, but then again, look at human faults of HWMNBN and Hamilton. Those were on full display.

6 New format: Approved. (Honestly, whatever makes the write-up more fun for YOU is approved, but genuinely I like this just fine.)

Two years. Yegods. No wonder this has become less fun over the years; it's basically down to Team A or Team B barring acts of Deity... such as a torrential downpour in ridiculous heat.

7 I agree that Vettel won by a pit stop, but one other point in support of Ferrari having found significant pace is that Kimi managed to overcome everything and still pull off a solid 4th.
The most disappointed ( and -ing) team right now has to be Red Bull, with both Toro Rossos finishing ahead of them and having both cars lapped by Vettel.