F1 Update!: Germany 2013 A brilliant blue sky welcomed the assembled masses as the Thundering Herd formed up on the grid at the Nurburgring's F1 circuit.  Mercedes' Shiv Hamilton was on pole, with hometown boy Hannibal Vettel next to him. Vettel's Red Bull teammate Mark Webber was directly behind Hamilton, in what could be considered a precarious situation for the Mercedes driver.  Still, the Silver Arrow has proven to be the equal of the RB9 as late; would the status quo be upheld?  Or would the other status quo, that of Vettel running away and hiding, gain preeminence?  Or would the Ferraris, lurking two rows behind, make their gamble on the harder tires pay off?  THIS is your F1Update! for the 2013 Grand Prix of Germany.

*LIGHTS OUT!:  The start of any F1 race is always a frantic scramble for position... either improving it, defending it, or losing it.  Polesitter Hamilton, obviously concerned about the Red Bull of Vettel, immediately cut across the circuit when the lights went out to begin the race.  The young German was having none of it, however, and stood his ground as he quickly came alongside the Mercedes driver.  All of this had the effect of opening a clear path for the other Red Bull driver, Mark Webber.  Normally, this wouldn't be an issue... Webber is the only person on the grid with his own named starting technique, after all (the legendary "Mark Webber Lousy Start©").  For once, however, the Australian had a clean, nearly perfect getaway from third... and found nothing but empty asphalt ahead of him. 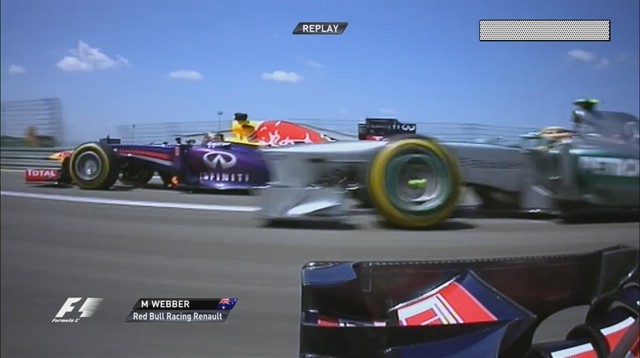 The Red Bull wave quickly swamped Hamilton, relegating him to third by the time they reached Turn 1, the two Lotus drivers hovering just behind him.  Meanwhile, Ferrari's HWMNBN and his medium tires tried grimly to hang on to the cars with the faster soft tires.  This proved to be easier said than done, as he was 10 seconds behind by Lap 7... and he was having to drive the rubber off of them to manage even that much.  Instead of the 20-25 laps he expected to do, he only managed 13, pitting before the Lotus of Lettuce Grosjean on softs.

*SAFETY CAR... HUH?:  On Lap 24, the proceedings were interrupted when the Marussia of Jules Bianchi blew its engine in a massive volume of smoke, followed by an impressive amount of flame. 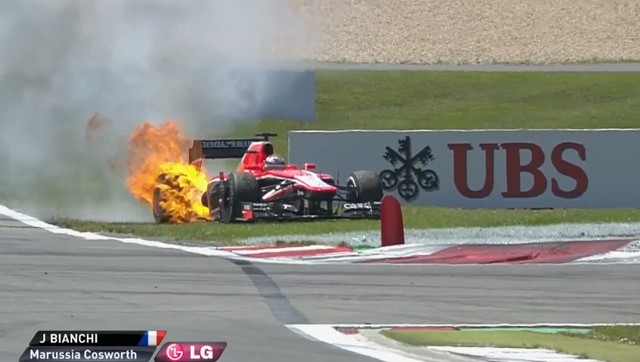 Bianchi brought the car to a halt, then under instructions from the pit lane, triggered the fire extinguisher and headed for the hills.  A track worker approached with a portable extinguisher, as did a tractor to carry the stricken car behind the barriers.  We then discovered another way in which F1 cars are unlike road cars: no parking brake.

Gravity: it's not just a good idea, it's the law.  Parked on a rise, the empty Marussia began to roll backwards and across the circuit, not coming to a halt until it made it to the other side where it was brought to a halt by an advertising sign.  Fortunately, this occurred with no other cars around, though not by much: that's Vettel's Red Bull at the top of the screencap there.  The Safety Car was summoned as the wild Marussia was brought to heel.  At this point, the order was Vettel, Grosjean, Raikkonen, HWMNBN and Jenson Button, having a great drive for McLaren.

*FINALLY:  The safety car stayed out for five laps, then racing resumed.  For the most part, the order remained as above for the next 20-odd laps, until the final pitstops.  There, Kimi Raikkonen pitted with 10 laps to go for a set of used soft tires, reemerging in third, a mere 3.5 seconds behind Vettel, with teammate Grosjean between them.  As the laps ticked down, Raikkonen narrowed the gap, his medium-shod teammate being told to get out of his way on Lap 55, with 2.5 seconds between him and the Red Bull.  Every lap, the Finn shaved off a little more of the gap, trying desperately to bring it down to less than a second so he could use the DRS and pick up that extra speed advantage over the Red Bull.  Finally, going into the last lap of the race, he did it: 1.0 second exactly.  He could get no closer than 7/10th of a second, however, and Vettel took the win, followed by Kimi and Grosjean.  HWMNBN crossed the line in 4th, then came to a halt on track by turn 1.

*DRIVER OF THE RACE:  Mark Webber.  He started third, nearly got the lead at the beginning, and was a serious contender for second place today, until a pit screwup (see below) put him dead last and a lap down.  He then got the free pass from the safety car, putting him back on the lead lap, then fought his way up the field to finish 7th.  Pretty good result, all things considered.

*TEAM OF THE RACE:  Lotus.  They may be second-guessing the need to bring Raikkonen in for that set of soft tires on Lap 50, but he probably wouldn't've had the speed to bring Vettel to heel otherwise.  And a 2-3 finish is pretty sweet anyway.  Good job.

*MOVE OF THE RACE: On the final lap, Shiv Hamilton came up behind the McLaren of his ex-teammate Jenson Button, suffering on old tires.  A try at Turn 1 didn't work, so Shiv decided to give a run around the outside of the long Turn 2 a go. 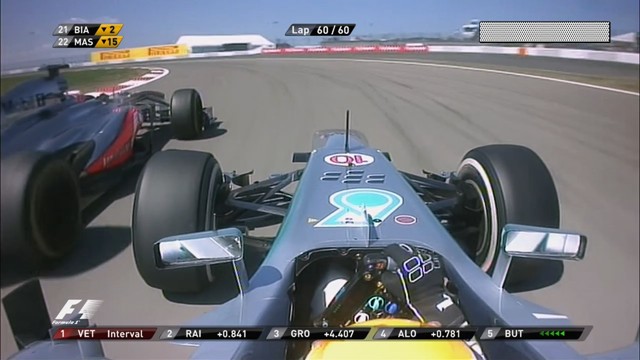 Much to everybody's surprise, including perhaps Hamilton himself, his less-than-stellar tires held traction well enough to let him power past Button.  He then remembered to leave Button racing room in the next turn as well, instead of cutting across his nose.  A fine job of driving from both Brits, and our favorite Move of the Race.

*MOOOOOOOOOO-OOOOVE OF THE RACE:  On Lap 9, Mark Webber brought his Red Bull in for his first stop.  The team had problems with the right rear wheel, however, and were not able to get it fastened onto the stub axle.  Maybe it was a tire gun problem, maybe the nut wouldn't engage, whatever, the upshot was that the Lollypop man let the car go without the tire being attached.  It stayed on the car long enough to allow him to get some speed up before it fell off and went careening down the pit lane. 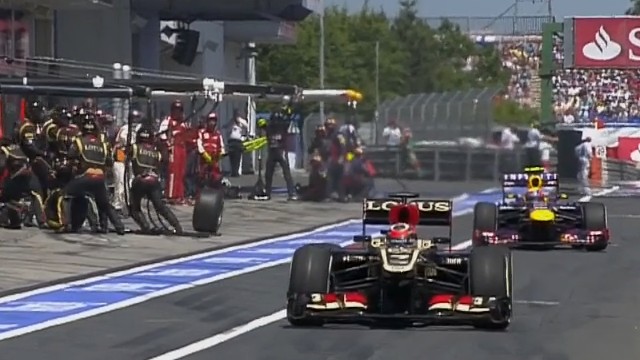 The Lotus pit crew had just finished servicing one of their cars and were in the pit lane when the tire assembly tore through them; fortunately they were all able to avoid the missile.  Unfortunately, FOM cameraman Paul Allen, who had his camera focused on the Lotus driving away, had no idea that the rubber-and-metal beast was coming for him. 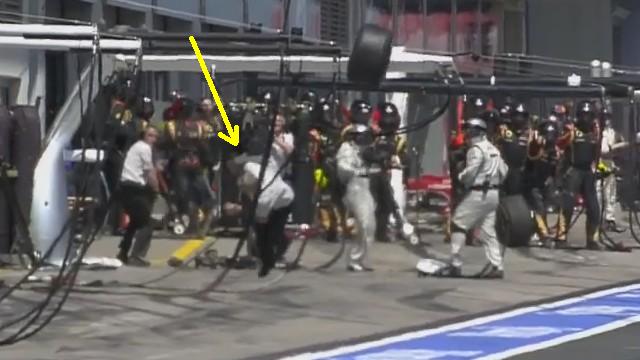 It caught him on the shoulder, sending him face-first to the ground.  He apparently suffered a broken collarbone in the incident, which is about as lucky as you could possibly get.  A video of the incident is here.  The team ran down, collected Webber's car, pushed it back to their pitbox, put another set of tires on, and sent him on his way... a lap down, but still in the race.  To everybody involved on the Red Bull pit crew, congratulations, here's your Mooooooo.

"We like these tires.  Let's keep 'em." - Lettuce Grosjean

"The car wasn't good.  The tires are crap.  Only I could make it competitive today." - HWMNBN

"Remember when I was on pole?  Wasn't that cool?" - Shiv Hamilton

"On the plus side, we got some much needed points.  On the negative, being happy with sixth place?  Oh my word." - Jenson Button

"Um... I have nothing to say that is either relevant or true." - Sergio Perez

"I'm the other Nico." - Nico Hulkenberg

So ends the first half of the F1 season!  The next race is the Hungarian Grand Prix in three weeks... F1U!'s favorite track ever!  See you there, then!

1 Red Bull was fined $38,650 for the pit stop incident.  Seems like a pretty light penalty for a top F1 team, especially considering that the incident caused an injury.

Great race, though.  Some good racing throughout.  Webber's incident, and the runaway Marussia, certainly provided some moments that I won't soon forget.

I'm hoping Lotus continues to be competitive.  Mercedes, I'm indifferent.  I like to see more teams competing at the top, but the problem is, if Mercedes really gets their stuff together and challenges for wins or even the titles, people will wonder just how much that Pirelli test helped them.  Now, it's possible that they might've gotten it right even without testing, but we can't be sure, so it may cast a long shadow over any further success they achieve this year.  With the upcoming young driver's test to be used as a tire test, I suppose it will level the field.

2 Man, Webber can't catch a break, can he? The one week he's got a great start and Vettel has mechanical problems, and they blow it in the pit lane...

I just get the feeling that the racing this year isn't as good as the year before. With tire strategy such an overwhelming factor, there just aren't as many cases of drivers taking it wheel to wheel - and when they do, all too often they're just handicapping themselves for later on. I get that last year's run-forever tires did a lot to reduce the role of pit stop strategy, but y'know, things might have gone too far the other way.

Of course, next season's car is radically different enough that who knows what will happen?

3 Next year is going to prove to be impossible to handicap, at least by anybody who actually knows anything, because of all the changes.

Which means Red Bull will probably have an advantage, simply because they have Adrian Newey.

4 What happened with Alonso after the race, when he stopped during the post-race lap?  The announcer speculation was that he ran out of gas pretty much right at the finish line, but since he didn't get a penalty I assume it was something else. I didn't see anything on it in any of the race commentary.

5 He ran out of fuel.  No reason to give him a penalty, as he didn't break any regs... it's only in Quals that the car has to make it back to the pits under its own power.  The only regulation is that there has to be a liter of gas in the tank for testing purposes.

The team probably told him to pull over ASAP because they thought he was about to get beneath that limit.  It happens.