F1 Update!: Europe/Valencia 2012 A lovely, but hot cloudless day shined down upon the members of the F1 Circus as they formed up on the grid behind Seb Vettel.  The asphalt of the harbor-circling circuit was running right around the point where the tires would begin to be goofy, but wasn't quite there yet.  Would the conditions play into the reigning world driver champion's hands, or would we see an eighth winner in eight races?  Or would one of the other previous winners figure out the challenge of the Red Bull driver?  THIS is your F1 Update! for the 2012 Grand Prix of Europe @ Valencia!

*LIGHTS OUT:  As the race began, all of our worst fears came to the fore.  Seb Vettel had an absolutely blinding start, streaking away from McLaren's Lewis Hamilton to the tune of 1.7sec by the end of the first lap.  It was four seconds by the end of the third lap and 7.6 seconds by the end of lap five.  In short, it looked like we had a flat-out massacre in the making.  By the time the first round of pit stops had ended on Lap 20, the lead was up to 19 seconds over Lettuce Grosjean, who had three seconds in hand over Hamilton.  The surprise of the race to this point was the performance of Ferrari's HWMNBN, up to sixth from his starting position of 11th on the grid.  Of course, picking up three spots on the first lap goes a long way towards that jump, but the fact still remains.

*A MOMENT OF LEVITY:  On Lap 14, the Williams of Metropolitan Maldonado was being closely pursued by the Lotus of Mumbles Raikkonen when, out of nowhere, this occurred: 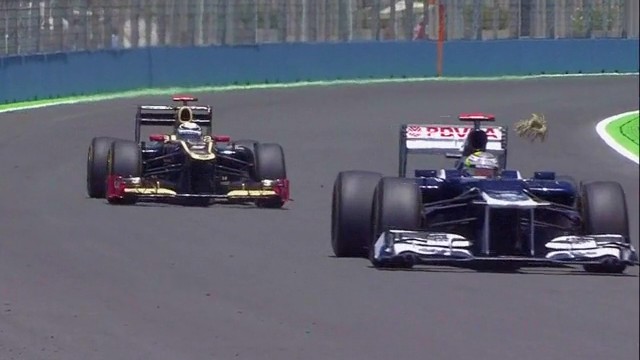 A straw hat came flying out of one of the radiator inlets of Maldonado's car, flooping through the air and landing harmlessly behind the Finn's chariot.  An odd moment in an otherwise dull race at the time.

*AND THEN:  Everything was tossed into a cocked straw hat.  As the leaders were on Lap 28, Jules Vergne tried to pass the Caterham of Heikki Kovaleinninninninnie.  As he went past the left side of the green car, his right-rear tire gently kissed the Finn's front-left.  The result was amazing and swift, despite the gentleness of the contact. 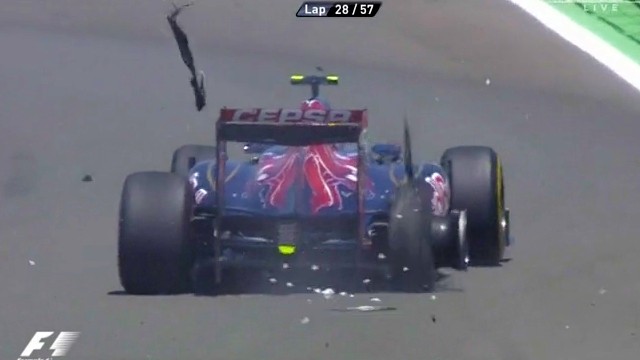 Vergne's tire shredded itself and whatever bodywork the flailing carcass could reach, scattering debris over a long, wide stretch of the circuit.  Kovaleinninninnie, more experienced, guided his car slowly to the pits, keeping his tire in more or less one piece.  He would continue, but the rookie's car was retired immediately on making it to the pits.  Because of the stunning amount of debris, the Safety Car was called out to allow the sweepers to man their brooms.

*EVERYTHING CHANGES:  After the rush of pit lane activity, the standings were Vettel, Grosjean, HWMNBN, Daniel Ricciardo (who had not yet stopped for tires), Mumbles, Hamilton (who lost at least two positions when his pit stop went to hell due to falling off the front jack), Nico Rosberg, Slappy Schumacher, Mark Webber (who started 19th) and Maldonado.  On Lap 33, the Safety Car turned off its lights and Vettel slowed to let it pull away, then got on the gas to stay ahead of the drivers behind.  Both Grosjean and HWMNBN ran with him, leaving the rest of the field in their dust.  As the first three turned onto the front straight, the Ferrari leaped all over the back of the Lotus, passing Lettuce as they went into Turn 2, in something of a brave move.  And then... 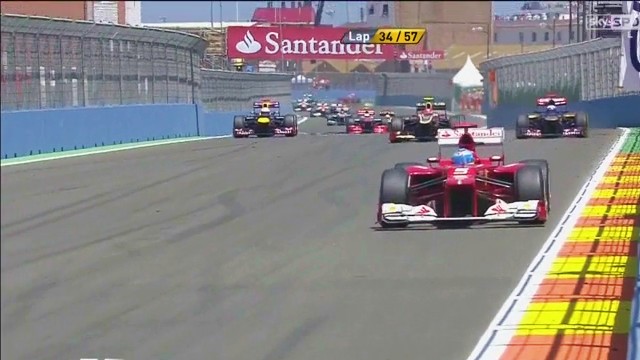 ...Vettel pulled over to the side of the track, his alternator burned out from the heat.  The somewhat partisan Spanish crowd went somewhat insane as their native son improbably took the lead of the race.  The race was far from over, however, as Lettuce Grosjean smelled a chance to win his first ever Grand Prix.  Following closely, he hounded the two-time driver's champion for seven laps before... 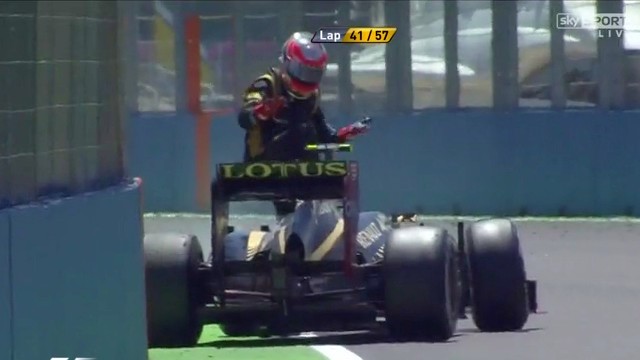 ...he pulled over to the side of the track, his alternator burned out from the heat.  It is no coincidence that both the Red Bull and the Lotus are powered by Renault engines.  The failure allowed Hamilton to move into second place, followed by Mumbles and Metropolitan.

*ENDGAME:  It stayed this way until the closing couple of laps, when Hamilton's tires began to fade, allowing him to be passed by Mumbles for second on Lap 55, while Maldonado closed in as well.  And then the red mist settled over Hamilton's eyes and he went into full defensive mode.  As Maldonado tried to pass after the DRS zone, the McLaren driver shoved him wide.  With a set of "sleeping policemen" staring him in the face, the Williams driver had no place to go. 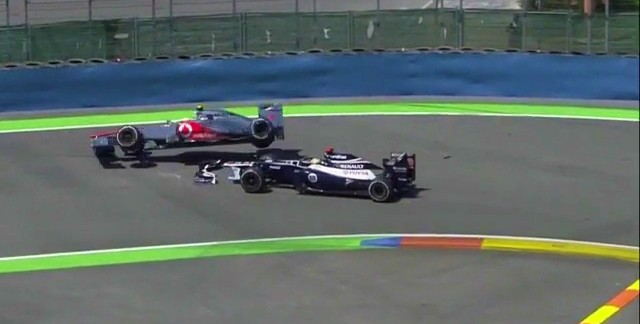 While the BBC announcers were somewhat apoplectic, the Legendary Announce Team had the right of it: the way the rules are written now, Hamilton had to leave Maldonado some room and didn't.  Hamilton ended up in the wall, radiator broken.  Maldonado lost his front wing, and with the resultant loss of downforce ended up 10th, and was later given a 20 second penalty for "causing the accident".  This coming together had the amazing result of vaulting Slappy Schumacher into third place, with Mark Webber close behind in 4th... which is the way the race ended. 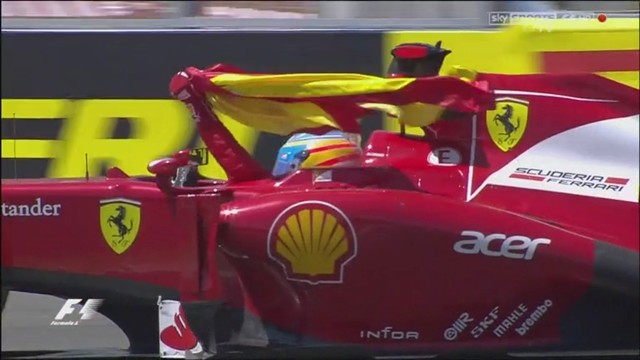 We believe that, if the FIA penalizes him for pulling over and taking a flag from track worker, the entire country of Spain should march on their offices and cover them in paella.  And we don't like HWMNBN.

*DRIVER OF THE RACE:  It's hard to not give it to HWMNBN.  Sure, everybody ahead of him died on the track, essentially handing him the win, but he had to be in position to take it... and he was, despite starting 11th.  A solid drive indeed, and one that made him the surprise first two-time winner this season.  Honorable mentions to both Slappy Schumacher for his first podium in the three years since he unretired, and Mark Webber, who finished fourth despite starting 19th.

*TEAM OF THE RACE:  We're proud to give this one to Force India.  They finished 5th and 7th and didn't put a tire wrong at all.  Mercedes may have finished higher (3rd+6th), but something about their result felt... wrong, probably because Rosberg started sixth and should have done better than finishing in the same place.

*MOVE OF THE RACE:  HWMNBN's pass on Lettuce Grosjean for 2nd place was quite good, but there's no good footage of it.  Just take our word for it.
*MOOOOOO-OOOOVE OF THE RACE:  Jules Vergne's clumsy wallowing that put paid to his race and damaged Heikki Kovaleinninninnie's Caterham was pretty egregious.  It was like he forgot he was passing another car. 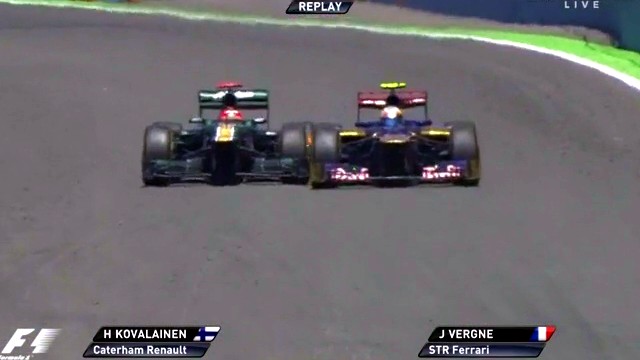 If you look carefully, you can see an orange spot where they're making contact.  There's so much room around them, it's amazing... and Vergne still hit him.  Simply stupid... and the perfect Moo.
*SELECTED DRIVER QUOTES OF THE RACE:

"When I crossed the line, I asked the team where I was and they said 'third - on the podium!', I couldn't believe it!" - Slappy Schumacher (note: real quote)

"Hey, I just finished fourth, and this is crazy, but here's my Red Bull, so call me maybe?" - Mark Webber

"I'd like to thank half the field ahead of me for dying or crashing." - Nico Hulkenberg

"If anybody out there has any idea what I should do, please let me know, because I've got nothing." - Jenson Button

"People were actually saying I had a chance to win this one at the start of the weekend.  Goes to show, eh?" - Sergio Perez

"That was one of the best high-speed non-wrecks ever." - Bruno Senna (who got tapped going into Turn 1, and didn't quite end up in the wall) 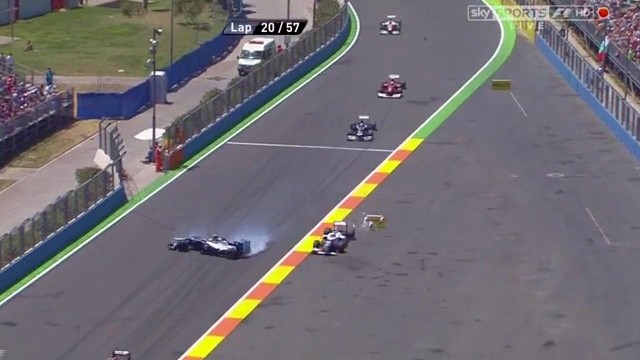 "What do you mean, I got penalized 20 seconds?  FOR WHAT?" - Metropolitan Maldonado

"What do you want me to say?  Nothing went right today." - Felipe Massa (note: real quote)

"The truth is that I gave it my all in this race, I emptied myself, and Iâ€™m satisfied.  But I still finished 17th." - Pete Rose (note: mostly real quote)

"And my axe." - Narain Kittylitter

"The race was perfect until it wasn't." - Lettuce Grosjean (note: real quote)

"AIEEEEEEEEEEEEE!" - Tim O'Glockenspiel (note: missed the race with an intestinal bug.  This is probably a real quote.)

So the first ever interesting race at Valencia is behind us, the new winner streak ends, and we move on now to Silverstone in two weeks... see you there!

1 Is that Senna going sideways in that last picture?

3 Okay, seeing that I only get my F1 fix via your blog (I always forget to turn it on on Sunday), why do you call him HWMNBN?

That individual is an asshole, irrespective of any skill he may have as a driver. He used to drive for McLaren, and in Hamilton's rookie year, which Hamilton nearly won, HWMNBN kept demanding of the team that they order Hamilton to let HWMNBN win instead.

When they refused to do that, he got all huffy. Eventually the team decided they didn't want all the crap and dumped him, probably a wise decision.

That was during the period in which the Harry Potter movies were coming out, so Wonderduck borrowed the name. And once he gives a name to someone, they're stuck with it.

5 By the way, Hamilton's rookie year was 2007; that's when this all went down. And that was HWMNBN's only year with McLaren. They hired him away from Renault, and he went back there in 2008.

6 *huge light goes off* Oh, HWMNBN!  (I missed the Potter reference there.)  I'm so bad... every time I see Potter, I see Henry Morgan sitting behind his desk at MASH.

8 Steven is mostly correct.  I didn't steal the "HWMNBN" name from Harry Potter, at least consciously.  I was actually thinking I borrowed it from F1rejects's nickname for F1U!'s hero, Zsolt Baumgartner... except I hadn't found the site by then.  So I don't know where I took HWMNBN from.