F1 Update!: China 2012 No rain in the forecast, a jumbled grid, a first-time polesitter with six World Champions poised behind him, and arguably 10 cars with a valid chance to win.  To say today's Chinese Grand Prix had potential would be something of an understatement.  But did it live up to that potential?  Did we get our third winner in three races?  Or did someone take firm command of the Championship?  THIS is your F1Update! for the 2012 Grand Prix of China.
*LIGHTS OUT:  It's often said that Formula 1 is, above all other things, a team sport.  The evidence for that usually lays quite thin on the ground, however.  The start of today's race was a good example of a team's two drivers working together, though.  As the red lights began to come on, nobody honestly expected polesitter Nico Rosberg to hold the lead past a few laps; his Mercedes hadn't shown the staying power.  The same could be said for Slappy Schumacher, his teammate and partner on the first row.  When the lights were extinguished and the race begun, the two German drivers worked together to maximize the team's chances of getting a victory.  Polesitter Rosberg got away blindingly fast, while Slappy's getaway was good but not great.  He very carefully managed to bottle up the rest of the field as they headed through Turn 1 while Rosberg began to disappear over the horizon.  The other 22 drivers could only sit on Schumi's tail and make occasional attempts at a pass, all of which were easily fended off by the surprisingly quick Mercedes.  Rosberg pulled away to a four second lead; hardly insurmountable, but far enough away that it'd take a heroic effort to track him down.

*BORING:  And that's how it stayed for the first 12 laps.  The train held up by Schumacher was released when he went into the pits... a pitstop that turned out to be the end of his race.  Miscommunication between the jackman, lollypopper and a tire changer saw his car released before the front-right tire was entirely torqued down.  A few turns later, he pulled over before the wheel could work itself free.  That was the last bit of excitement we saw until around Lap 45 or so.

*NOSE-TO-TAIL:  One common complaint American viewers often have about F1 is the way the field gets spread out during the course of a race.  "It's not exciting", they say, and it's hard to argue with that point.  Close racing is preferable to having everybody 200 yards apart.  On Lap 46, here's how the field looked:

This is the battle for second place.  Kimi Raikkonen leads Seb Vettel, Jenson Button, Lettuce Grosjean, Mark Webber, Lewis Hamilton, Bruno Senna and Pontiff Maldonado, with the whole group separated by two seconds.  There were a couple of reasons for this admittedly uncommon occurrence.  The first was that all of these cars have roughly the same level of performance in comparison to each other.  To be sure, there are differences: the Red Bulls are the slowest on the straights, Renault Lotus the fastest, for example, but everything seemed to be balancing out.  The other reason may have been the most important... tire clag.

This season, tire manufacturer Pirelli vowed that they'd make a tire that didn't wear as dramatically as the 2011 tire did, and for Australia and Malaysia, it looked like they had succeeded.  In China, however, the tire clag began building up early and never stopped.  Drivers were reluctant to leave the clean asphalt to make a passing attempt on the less grippy marbles... leading to Kimi Raikkonen leading a train.
*EXCITEMENT:  The last 10 laps had enough excitement to make up for the rest of the race.  Kimi's tires fell off the infamous cliff, and in the space of one lap fell from 2nd to 10th.  This lead to the uncorking of the rest of the field.  To begin with, Button got past Vettel, then Lewis Hamilton did the same.  As the race neared completion, Vettel's teammate Mark Webber muscled the young German aside to move into 4th place, in a moment that had to feel good after the crap he's put up with the past two seasons.  Leader Nico Rosberg, far enough up the track to not be able to see what was going on, said he had no idea what was happening.  "The pit wall was calling, saying 'Kimi is in second, now Button is, now Vettel...'.  I didn't know what to expect next!"

*WONDERBOY: Years ago, when Nico Rosberg came into F1, we here at F1U! nicknamed him "Wonderboy."  Near as we could tell, he had everything you could possibly ask for in a driver: GP2 champion, the ability to drive fast under pressure, a good bloodline (his father is a former World Champion), and a great hairstyle.  The only thing he didn't have was success in F1.  "Wonderboy" became derogatory, then we stopped using it altogether.  On Lap 56 of the 2012 Grand Prix of China, Rosberg finally began to live up to his billing, bringing home a 20 second victory for his first F1 win, and the first win for Mercedes as a Constructor since 1955.  Button and Hamilton trailed behind, followed by Webber and Vettel.

*DRIVER OF THE RACE:  Nico Rosberg.  Other than laps during the pit rotations, Nico led from pole to flag, at one point had a 25-second lead, and was never in danger of losing control of the race.  Easily the equal of many of Vettel's dominating performances in 2011.

*TEAM OF THE RACE:  McLaren.  A 2-3 finish is always a good result, though they did throw away any chance at a victory during Jenson Button's nine-second-long pitstop towards the end of the race.  Still, could be worse, they could have thrown away a possible 1-2, like Mercedes.
*MOVE OF THE RACE:  Towards the end of the race, there were so many passes it was hard to choose just one.  After lengthy contemplation, the F1U! team decided to go with the pass that led to the end of Kimi Raikkonen's stay in the points.  Seb Vettel had been stalking the mumbling Finn for a couple of laps, looking hither and yon for an opening.  On Lap 48, he made a go of it. 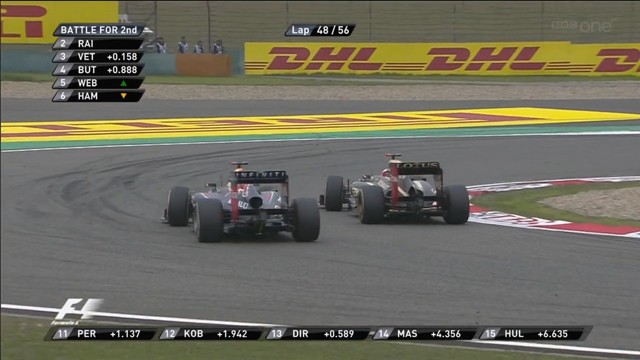 Going into the turn, he looked like he was going to try going around the outside, so as to be better positioned for the next bend.  Raikkonen, holding the racing line, could not have been particularly concerned. 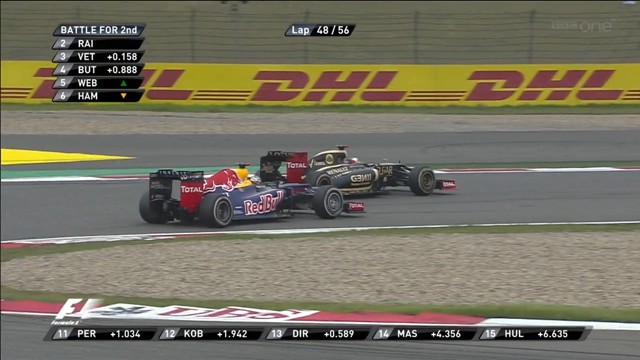 Surprisingly, Vettel tightened up his turn and undercut the Renault Lotus driver, then stomped on the gas and smashed the KERS button. 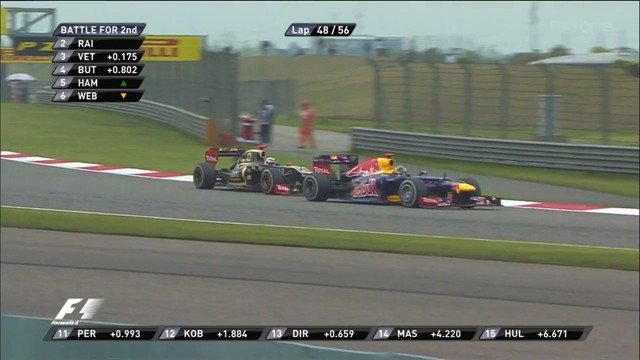 He then proceeded to out-muscle the Kimster into the next turn.  In the process, Kimi burned off what was left of his tires' grip, sending him staggering into the clag on the next turn.  Pretty much everybody passed him after that, including two soapbox derby racers, a R/C car, and Narain Kittylitter.  Okay, that last one is too ridiculous to believe, but our point is made.

*MOOOOOO-OOOVE OF THE RACE:  It's unfair to give this one to the recipient, as he really didn't do anything wrong per se, and indeed it could be argued that it's more an example of fine car control than anything else.  But we've gotta give it to someone, and Mark Webber is the lucky fellow.  On Lap 37, the Australian ran very wide off the turn known as "Indianapolis" and discovered that doing so might not be the best of ideas. 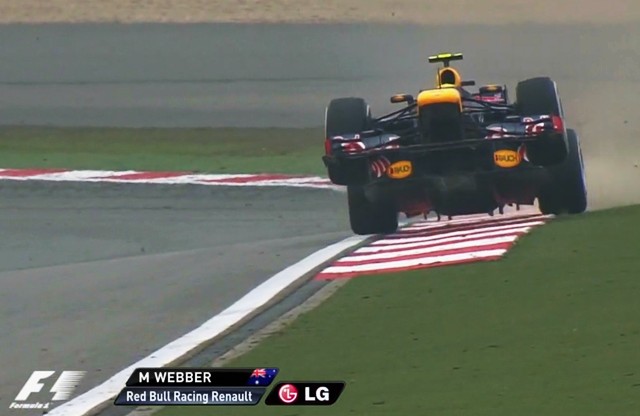 A driver the height of Mark Webber pretty much is sitting on the floor of the cockpit with no padding of any sort, and it's well-known that F1 cars are entirely unsprung.  The jolt Webber must have received upon landing had to have been teeth-rattling and spine-compressing.  Despite this, the RB8 showed no ill effects, and he still finished fourth.  Good job, Mark... here's your (undeserved) Moo.

"I drove a great race, and who knows what would have happened if I had a clean final pitstop, instead of that dog's breakfast I got." - Jenson Button

"I wonder if it's possible to win the championship by finishing only in fourth place?" - Mark Webber (note: all three races so far)

"Considering I was as low as 15th at one point today, I'll be happy with a fifth." - Seb Vettel

"I finished a race!  Hell, I finished more than four laps!" - Lettuce Grosjean

"It was a great result for the team, to get both cars in the points." - Bruno Senna

"For the team to get both cars in the points, it was a great result." - Pontiff Maldonado (note: no, we're not joking)

"I didn't stall on the grid, but I did everything else but." - Gandalf Kobayashi

"Hey, pit wall, do we need this finish, too?" - Sergio Perez

"Everybody's around the same pace... we're just at the low end of 'everybody'." - Paul di Resta

"I did everything I could, which I'm sure thrills Ferrari management to no end." - Felipe Massa

"No, don't worry about not remembering seeing me in today's race... you didn't, really." - Nico Hulkenberg

"What's he on about?" - Daniel Ricciardo

"The proletarians have nothing to lose but their chains. They have a world to win." - The Red Menace.

"I've almost caught up to Timo.  I'm sure he's happy for me!" - Charles ToothPic

"My start was quite poor.  Also my finish.  And the middle.  Really, if you think about it, my entire F1 career, too." - Narain Kittylitter

Next week, make sure you've got your body armor and helmets ready, because we're off to Bahrain!  We'll see you then!

2 HWMNBN has the right of it, Steven.  Sometimes, you design a car, test it to death... and it still just doesn't work right for whatever reason.  That appears to be what's plaguing Ferrari right now.  It happens to every team at one time or another.

3 A friend observed that there are seven drivers this year with no points... the back three teams and Felipe Massa. Ouch!