F1 Update!: Canada 2013 Despite prayers from the Williams pitbox and rain dances from Ferrari-hired Mi'kmaq DJs, the skies were sunny and clear when the F1 Circus pulled onto the grid for a race that would be unlike any since 2001.  THIS is your F1 Update! for the 2013 Grand Prix of Canada.

*THE BEGINNING: The lights went out, and polesitter Hannibal Vettel did what he always does: ran away and hid.  By the end of the first lap, he had a two second lead.  By the end of Lap 3, when they activated the DRS system, the lead was up to 4.5 seconds and getting larger.  Mercedes driver Shiv Hamilton could do nothing to keep in touch with the Red Bull.  Sadly and as expected, Williams driver Valtterri Bottas dropped like a stone from his third place starting position, ending up in sixth after the first lap and going backwards the whole race.

*THE BAD OLD DAYS:  By the time the first pitstops came around, it was clear that the race was Vettel's to lose.  When he stopped for the first time on Lap 16, he handed the lead to Hamilton, and immediately began tracking him down again.  Three laps later, Hamilton pitted, relinquishing the lead back to the Red Bull driver.  Those three laps were the only ones Vettel didn't lead all day.  Vettel wouldn't stop again until Lap 50.

*WHAT'S THE POINT?:  When Vettel came in for his second stop, his lead was large enough that he could pit for new tires, get out, use the loo, have some poutine and Tim Hortons, and still rejoin in third.  Instead, he just stopped for tires and came back onto the circuit with 15 seconds still in hand.  He'd go on to cruise to a 14 second victory.

*SECOND PLACE:  Around the same time that Vettel was enjoying a Molsons, Ferrari driver HWMNBN had reached a point where he could legitimately begin to threated Hamilton's second place position.  It took 12 laps of the Mercedes driver making his car quite wide, but the Spaniard finally managed to get past with eight laps remaining.  Unfortunately, the gap to Vettel was 20 seconds.  That it dropped to 14 was simply a case of the three-time World Champion dialing it back a bit to protect the engine.

*AND THEN... TRAGEDY:  On Lap 66, Sauber driver Esteban Gutierrez made a late pit stop, exited, and for whatever reason went straight into the wall at the outside of Turn 2.  He hopped out unhurt, and the mobile crane came out to pick up the car.  As the crane brought the car back to the pit lane after the race, escorted by four track marshals.  One of the men apparently dropped his portable radio, bent down to pick it up, lost his balance and fell... directly into the path of the crane. 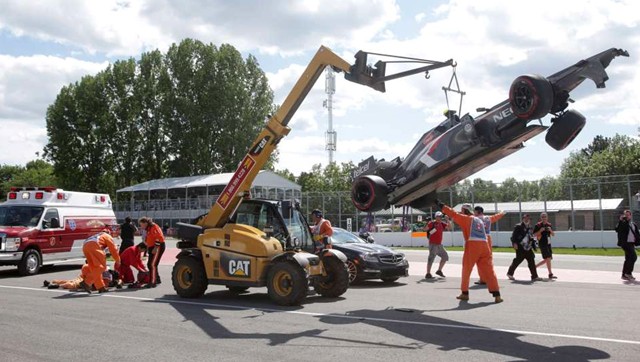 The man was swiftly attended by F1 medical personnel and taken to the trauma department at Montreal's Sacre-Coeur Hospital, where he tragically passed away a couple of hours later.  The marshal, who's name has yet to be released, is the first death at a F1 event since 2001.  Track workers are the unsung heroes of any race weekend.  Without them, the events we watch with such passion could not take place.  The job is thankless, pressure-filled, dirty, sweaty, and often dangerous... as any job that takes place in the vicinity of high-powered equipment of any sort can be.  Almost all of them are volunteers and fans, wanting to be part of the race.  They are almost always invisible, the backstage workers that let the young men and women in their carbon fiber darts, their steel sleds, their fiberglass missiles, entertain us and thrill us with their speed and skill.  That one of them should die is terrible, and we here at F1Update! bow our heads and extend our heartfelt condolences to his family and friends.

*DRIVER OF THE RACE:  Paul di Resta started the race 17th on the grid.  He didn't make his first and only pit stop until Lap 56, and the tires that came off his Force India looked like they still had a few more laps left in 'em.  Even with the late-race stop, he still managed to come home in 7th place, a ten grid-spot pickup from the beginning.  Just astounding.

*TEAM OF THE RACE:  Ferrari.  HWMNBN ended up in second, but Felipe Massa, who started in 16th, ended up in 8th to minimize any point damage they could have suffered at the hands of Red Bull.  Nice job to a team we rarely have anything good to say about.

*MOVE OF THE RACE:  By default, this one goes to HWMNBN for his late pass on Shiv Hamilton for 2nd place.  There were few passes to choose from, to be honest.  While the Ferrari's pass was DRS-aided, that he did it on the short, short front straight DRS zone, just past the final chicane, came as something of a surprise, if not just to the F1U! crew perhaps to Hamilton as well.  There have been dozens of better passes this season, however.

*MOOOOOO-OOOOVE OF THE RACE:  We're giving this one to Esteban Gutierrez of Sauber.  When he exited the pits late in the race, he apparently hit a bump going into Turn 2, locked up the outside tire, and just floated himself right into the barrier.  Just a clumsy, clumsy maneuver, one well worth the MoooootR.  (Please note: that a worker died during the clearing of the car has nothing to do with the award.  Gutierrez had nothing to do with that.  The crash really was one that falls into the "what in the world?" category)


"Oh?  There were others in the race?" - Hannibal Vettel

"Today there is nothing to celebrate. Terrible news arrive with the death of a marshal this race. Very sad. R.I.P." - Fernando Alonso, via twitter.  (note: when he does something cool like this, he deserves to have his name, not his moniker.)

"If that wasn't the fakest smile I've ever put on my face during the podium ceremony, I don't know what is." - Shiv Hamilton

"I dedicate my finishing position to Giedo van de Garde.  Just more proof that one should always pass the Dutchie 'pon the left hand side." - Mark Webber (note: he tried to pass the Caterham driver on the inside of Epingle... and wound up losing a good chunk of his front wing in the process.)

"This is the best finish for a Toro Rosso driver since Vettel drove for the team in 2008." - Jules Vergne

"I could have driven 20 laps on sponge cake today!" - Paul di Resta

"See?  I can TOO drive without crashing!" - Felipe Massa

"This was the end of McLaren's 62-race points scoring streak, the longest in F1 history.  Mauvais  Tabernac." - Sergio Perez and Jenson Button, 11th and 12th, respectively.

And that's it for the Canadian Grand Prix.  Next up?  Silverstone in three weeks!  See ya there!

1 Paul di Resta has been having a hell of a year. He's been in the points 6 out of 7 races so far. He's no threat to Vettel for DooY, of course, but it's still an amazing performance.

2 A sad coda to the race. Especially since he was a volunteer.

3 Do you think Sutil deserved the drive through penalty right at the end?  I didn't think he did anything to prevent Hamilton and Alonso from passing, but they were stuck behind him for a while.

Also, can you imagine how pissed Kimi was when Vettel came up to lap him?

4 Did he deserve it?  Yes.  Were other drivers also deserving of the same penalty that weren't called on it in Montreal?  Yep.  SHOULD he have been penalized?  Eh.