F1 Update!: Belgium 2010 If there's one thing you can expect at Spa, it's that the weather is unpredictable.  Would the circuit in the Ardennes give us another wet race, or would the unpredictability throw up a dry circuit?  THIS is your F1U! for the 2010 Grand Prix of Belgium!
*PREDICTABLE, REALLY:  When the cars pulled up to the grid, the latest weather forecast was that it was going to rain, but not for ten to fifteen minutes.  Knowing that, all the heavy hitters took to the track on the soft slicks, ready to run hard and fast.  A lousy start by polesitter Mark Webber let the McLarens of Lewis Hamilton and Jenson Button and the Renault of Robert Kubica blow by him, with Felipe Massa's Ferrari sitting right on his diffuser.  Still, it looked like the first lap would be normal, if a little confused... until it began to rain on the downhill section of the circuit.  Even with that, everybody seemed to be able to drive their vehicles through the spitting weather... until they reached the final chicane.  Hamilton just couldn't get himself whoa'd up and blew the turn, which should have left the door open for Button, Kubica et al to go by.

Except nobody could make the turn, and it wasn't just the first five, either.  It looked like the entire field blew the chicane... except for HWMNBN, who actually seemed to get his car turned into it.  Then Rubens Barrichello's Williams plowed directly into the right-rear tire of the Ferrari.  Rubens, front suspension turned into splinters and shards, retired on the spot.  Surprisingly, HWMNBN was totally undamaged other than a flat tire and drove directly into the pit lane for a set of Intermediate tires.  As the leaders came around to finish Lap 2, the carcass of the Williams had not yet been cleared so a safety car was called.

*TOTALLY PREDICTABLE: While three or four other cars dove into the pits to switch to Inters, the leaders stayed out on their slicks.  The safety car went in after one lap, and we here at F1U! braced ourselves for the inevitable pileup in La Source when the slick tires skated on the wet track.  Except it never happened.  The rain had totally stopped, and the track, while not exactly dry, wasn't treacherous anymore.  HWMNBN ripped his Inters to shreds in a couple of laps and had to stop again, dropping to the back of the field.  Such a shame.  A few laps later, Vettel wrecked Jenson Button and earned himself a drive-through penalty for doing so (see the Mooooooo-oooove Of The Race, below).

*PREDICTABLE, REALLY: It stayed dry until Lap 34, when it began to drizzle again.  Of course, this happened seconds after Race Control sent a message to the teams saying that rain was expected in 10 minutes.  Typical, really.  The leaders stayed out on their slicks, hoping to get just one more lap in before it became too damp... and Lewis Hamilton, leading by nearly 15 seconds, missed a turn and went into a gravel trap.  He managed to keep from getting stuck, but everybody took the hint and pitted.  Somehow, HWMNBN managed to spin off track despite his full wet tires, broke his suspension and came to a stop right on the racing line.  Another safety car came out, but nothing would keep Lewis Hamilton from winning the race a few laps later, bringing another exciting race at Spa-Francorchamps to an end.

*DRIVER OF THE RACE: Slappy Schumacher loves Spa.  He's won the race six times, had a seventh victory taken away from him, and has proven that he knows the place like the back of his hand.  He proved it again today, dragging himself up from the depths of the grid from 21st to end up 7th.  It pains us to say this, but his performance today really deserves to be given the Driver of the Race award.  Ow.

*TEAM OF THE RACE: Trying to cleanse our palate, we're going to give this one to Force India.  Adrian Sutil finished fifth after a beautiful drive.  His teammate Vitantonio Liuzzi claimed 11th place, but was promoted to 10th after Toro Rosso's NKOTT was hit with a 20-second time penalty for cutting the chicane while defending against Liuzzi.  Last year, of course, FI got their first podium here at Spa, and while this finish wasn't quite as good, it was still an encouraging result for this "bubbling under" team.
*MOVE OF THE RACE:  We're breaking with tradition a little here today, in that we're not giving the MotR to a pass, but an avoidance!  On Lap 40 with the rain coming down, Jarno Trulli lost control of his Lotus at Pouhon, perhaps the highest-speed turn on the track, with five or six others bearing down on him.  Trulli's car continued to rotate down the track, but yet Vitantonio Liuzzi and Heikki Kovaleinninninnie managed to avoid him without losing control themselves, despite the wet conditions and the high closing speed! 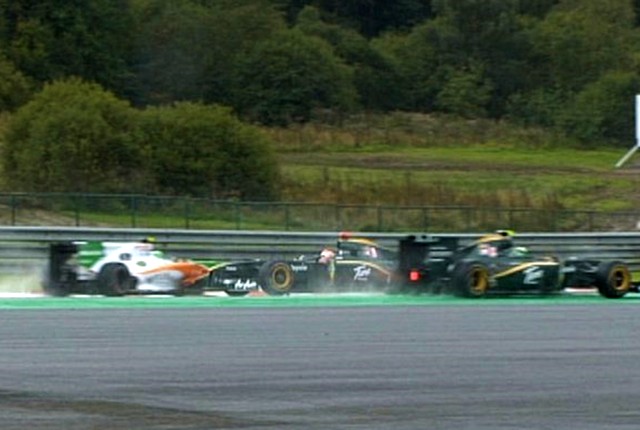 Thus was disaster avoided, but only because of quick reflexes and high skill.  Nice job, guys!

*MOOOOOOOOOOO-OOOVE OF THE RACE: When the best drivers in the world race like cows, they earn themselves the Moooooo-ooove of the Race.  It's hard to argue that Seb Vettel isn't one of the best drivers in F1, but boy does he do stupid stuff sometimes.  Today, he was closing in on Jenson Button as they approached the final chicane.  Close behind on wet pavement, he moved inside then decided to dodge to the outside with a quick flick of the wheel.  Predictably, his Red Bull's tires couldn't handle the traction demands and voomph!  Away he went: 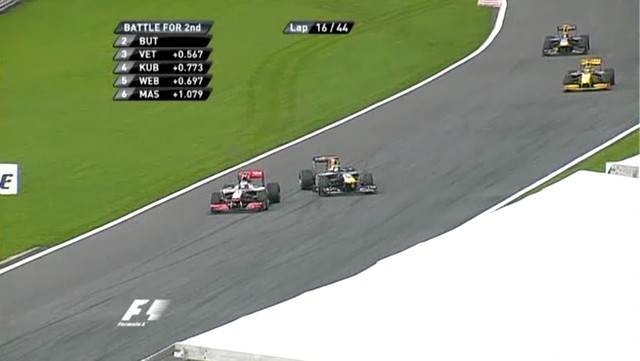 Of course, you can't drive in F1 without having near-superhuman reflexes so he was already correcting his slide even as it was beginning.  And then the tires got grip again. 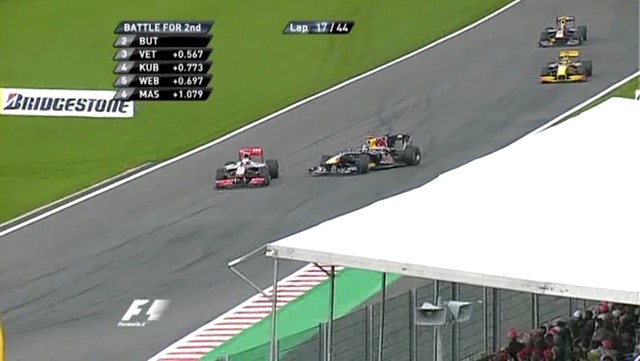 Even though he was correcting the fishtail caused by his first correction, he couldn't gather it up a second time and was surely destined for the grass... except for one little thing. 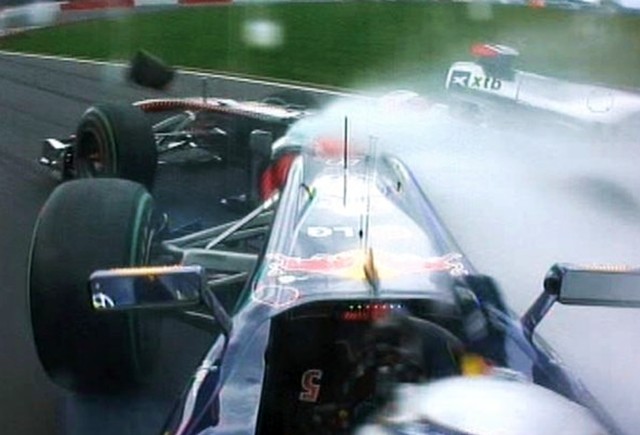 Button's McLaren was in the way.  Vettel's nose speared right into Button's left sidepod, shattering the radiator, ending his race and perhaps his championship hopes.  Vettel drove right into the pits, got a new nose and continued on.  For his overenthusiastic passing attempt (again), we present Seb Vettel with this Moooooo.  Blech.
*SELECTED DRIVER QUOTES OF THE RACE:

"I'd like to apologize for running over half of my mechanics during that last pit stop.  Whoops." - Robert Kubica 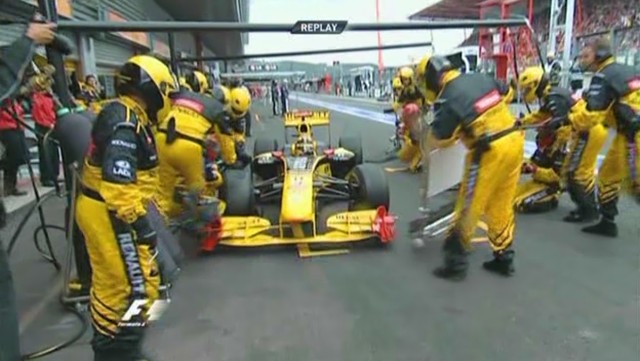 "Surprisingly, the team didn't order me to relinquish my car to HWMNBN after he crashed." - Felipe Massa

"Imagine how dangerous I'd be if I had a good car under me!" - Adrian Sutil

"Slappy and I had a couple of battles out there which was fun. We respect each other and you just have to be careful and it all worked out okay." - Nico Rosberg (note: real quote)

"Bloody pissant wouldn't get out of my way.  I'll have Rosberg killed for that." - Slappy Schumacher

"Three hundred lives of men I have walked this earth and now I have no time.  I don't know what that means in this context, but let's go with that." - Gandalf Kobyashi

"I threw away points today with my excursion into the gravel trap.  There goes that career." - Pete Rose

"It wasn't my fault I sucked today.  My engine control box wouldn't work.  Imagine pressing on the accelerator and having to wait a random amount of time before the engine reacts... that's what my whole race was like." - Nico Hulkenberg

"Nothing to see here, move along." - Lucas di Grassi

"Iâ€™ve been too unlucky in the races this year." - Timo Glockenspiel (note: real quote.  Well, what did you expect, Timo???)

"My car is made out of the same stuff they make airplane black boxes out of." - HWMNBN

So that's it for another fun one from Spa.  In two weeks, we'll be at another classic track; the Temple of Speed, Monza.  We'll see you then!

2 Other than Slappy having two outstanding duels with his teammate and Petrov barely being on the same track as his, I'd say yes.  But throw in the fact that both Mercedes passed Petrov (after a round of pitstops) and he did nothing about it, I'm saying no.

4 More info is leaking out on the Austin track.  It is of course Tilke designed, but the proposed layout looks better than many.

If they actually make this work and get a race there in the spring of 2012, I'm going to scraping the bottom of the piggy bank for the trip.  Austin is a lot easier than Montreal.