F1 Update: Australia 2015 Some might call what happened in Melbourne a farce.  Others could characterize it as an example of everything that's wrong with Formula 1.  We here at F1U! look at it and wonder what an Australian hot dog would have for toppings.  THIS is your F1Update! for the 2015 Grand Prix of Australia!

*SECOND VERSE:  Stop us if you've heard this one before.  Lights go out, Lewis Hamilton runs away and is next seen by TV cameras with two laps left as the announcers wax rhapsodic about the level of domination both he and Mercedes displayed during the race.  Meanwhile, Nico Rosberg ran a race just as good as Hamilton's, only blemished by not being able to catch the reigning World Champion despite similar equipment.  That Rosberg was over 35 seconds ahead of the third place finisher should tell you everything you need to know about how the race went.

*THAT WAS UNEXPECTED:  Okay, first and second were pretty much locks.  But what about the rest of the race?  From all appearances, if it wasn't for Mercedes we might have a helluva season on our hands.  The five spots from third through seventh were claimed by five different teams... in order: Ferrari, Williams, Sauber (!), Red Bull, and Force India.  The first team to double up was Sauber (!!) in 8th, followed by a sixth team, Toro Rosso in 9th.  That's a great distribution, and one that's unfortunately not going to repeat itself.

*WHAT?  WHY NOT?:  Because you don't often have races that end with 11 cars running, that's why.  Bad enough that Manor DNQ'd and we were beginning the race with 18 cars.  Then news came down that Williams' Valterri Bottas had a back injury and couldn't race, dropping us to 17.  As if that wasn't enough, McLaren's HWMNBN'DSI had his engine grenade itself on the sedate drive to the pre-race grid.  A minute later, the Red Bull of Daniil Kyvat rolled to a stop, his gearbox transformed from a precisely tuned instrument to a handful of metal shavings and hate.  We were down to 15.  By the end of the first lap, Lotus' Pastor Maldonado was in the wall, aided in his destruction by Sauber's Felipe Nasr.  The other Lotus driver, Lettuce Grosjean, pitted at the end of Lap 1, his engine performing like the team installed the turbocharger backwards, and the fans in Melbourne were watching 13 cars race.  On Lap 34, Junior Verstappen's debut race came to an end with a high-pitched report of "smoke in the cockpit" and a plume behind him, and then there were 12.  A few laps later, Ferrari let Mumbles Raikkonen leave the pits with one of his tires attached incompletely, ending his day just a few turns out of the pit lane.  Eleven.  The slowest car on the grid, Jenson Button's McLaren, very nearly earned a point by not failing, despite ending the race two laps down.

*DRIVER OF THE RACE:  Felipe Nasr, Sauber.  Last year, Sauber had the worst season in their history, scoring zero points and nearly having to pack it in for lack of funds.  This year, they're racing two rookies because they brought huge checkbooks to the table.  Well, one of the rookies showed he's not afraid to hang with the big names of the sport, finishing fifth ahead of Daniel Riccardo and just behind Felipe Massa.  Oh, and coincidentally earning 10 points for Sauber.  Not bad, kid... now do it again!

*TEAM OF THE RACE:  Well, Mercedes of course.  I could give it to Sauber for getting both drivers in the points after last year's debacle, or McLaren for getting one car to the end of the race (the longest they've managed to have a car survive in 2015), but Merc made it clear that this is their season to lose.

*MOMENT OF THE RACE: After Pastor Maldonado's Lotus was installed into the wall between Turns 1 and 2 on the first lap, the Safety Car was summoned for a few laps.  On the restart, leader Lewis Hamilton was granted a boon from the Restart Gods.  It only felt like he had a three second head-start as they crossed the line; in reality it took him the entire rest of the lap to open up a 2-1/2 second lead over his teammate.  If there was any question that Hamilton wanted the win today, that perfectly timed restart dispelled it.

"I drank the champagne on the podium and I saved some for the guys in the team, because they told me they like it a lot." - Seb Vettel (note: real quote)

"I believe that Mercedes isn't giving us the same engine they have in their car.  They're doing it to help Ferrari.  Why?  Aliens.  I'm not wearing any pants.  There are no grapes in grapefruit." - Felipe Massa

"I am very happy with fifth position in my first Formula 1 race.  And that I'm single, young and a F1 driver.  My life is perfect right now." - Felipe Nasr

"Meat pies, vegemite and tim-tams for everybody!" - Daniel Riccardo

"I said something boring and generic to commemorate my 7th place finish." - Nico Hulkenberg

"It's 'Carlos Sainz', not 'Horatio Sanz.'  I just want to make that clear." - Horatio Sanz

"I was faster than Button." - Sergio Perez

"Today was a good day.  No, really!  We got a lot of data, we didn't explode or electrocute anybody, so it's a good day.  And we were almost in the points." - Jenson Button

Two weeks from now is Malaysia... see you then! 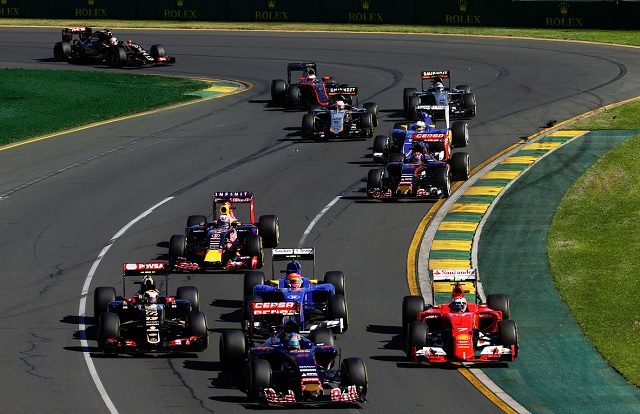 1 As a race team, McLaren makes a fine cartoon studio.  (Are they doing that again this year?)

2 Not that I've heard.  The past few years, it hasn't started until a few races in anyway.

3 And another experiment. I'm not logged in and I'm using "anonymouse".

5 Thanks for the update, I would've forgotten that the season even started otherwise.