F1 Update!: 2012 Grand Prix of India Smog filled the air of Greater Noida, lending a hazy aspect to the proceedings as Seb Vettel led the field to the grid.  Behind him, Mark Webber, Shiv Hamilton and HWCBN(UCC) all knew they had to get past the reigning world champion if they were to have a chance in this season.  So did they manage it?  THIS is your F1 Update! for the 2012 Grand Prix of India!

*LIGHTS OUT, RACE OVER: By now, careful readers know that whenever we ask if someone can reel in Seb Vettel, or if the field can track down Seb Vettel, or if anybody can get past Seb Vettel, it's generally a good bet that the answer is "no, they can't."  And so it was this race.  When the race began, Mark Webber had a great start, perhaps the best start we've seen from him all season.  He was still two car-lengths behind Vettel when they hit the first turn.  By the end of the first lap, Vettel was three seconds up on third place Jenson Button, and 1.2 seconds on Webber.

*NO, REALLY... RACE OVER:  Nobody ever even came close to Vettel.  Like most other teams, Red Bull planned a one-stop race for their drivers, and it was up to the drivers to make it work.  Webber did a fantastic job, making his fragile soft tires last 31 laps... over half of the 60 laps scheduled!  Vettel went 34 laps and had enough of a lead that he rejoined the race in first place.  Indeed, for the second straight race he led ever lap... his run is now up to 205 consecutive laps in the lead.

*RELIABILITY PROBLEMS: ...were the only thing that kept Red Bull from another 1-2 finish.  During the final third of the race, Webber's KERS unit gave up the ghost, allowing Ferrari's HWCBN(UCC) to get past for second late.  He was still nearly 10 seconds behind Vettel though.  McLaren's Shiv Hamilton and Jenson Button rounded out the top 5.

*DRIVER OF THE RACE:  We're seeing a type of dominance from Seb Vettel that hasn't been witnessed in F1 in decades.  Four wins in a row hasn't been pulled off since Slappy Schumacher in 2004.  205 consecutive laps led hasn't been done since 1992.  Three races without anybody but Vettel leading?  Last time that happened was 1989... some guy named Ayrton Senna.  It's certainly a tribute to Adrian Newey, the designer of the RB8, and to Red Bull in general, for keeping his car going... but it's Vettel who has made it happen.

*TEAM OF THE RACE:  It's not just the driver's championship, either.  Their 1-3 finish puts Red Bull 91 points up on Ferrari for the Constructor's Championship.  Only a KERS unit failure, mentioned earlier, kept them from sweeping the top two steps of the podium.  Nobody would have been shocked had that occurred, actually.

*MOVE OF THE RACE:  There was really only one nice pass, on Lap 16, by Bruno Senna over his distracted teammate Mahamandaleshwar Maldonado, all race.  So instead, we're going to spotlight the Pit Stop of the Year.  Prior to Lap 33, Shiv Hamilton had been reporting intermittent radio communications with the McLaren pit wall and a downshift problem too.  Somehow, they came to the decision that they could fix it during his stop. 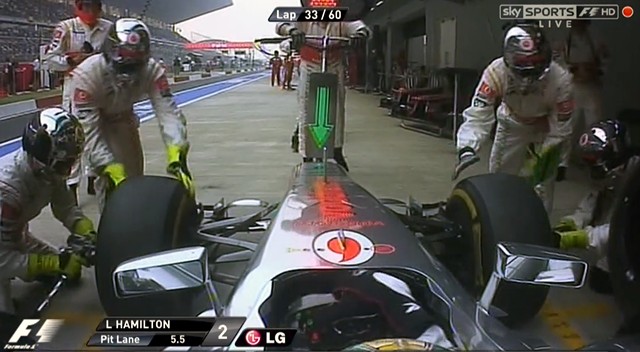 5.5 seconds have elapsed since Hamilton crossed the line denoting the entry to the pit lane.  The car has just come to a halt in its box, the tire gunners are already removing the wheelnuts, and Hamilton himself is starting to remove the steering wheel, which is quite uncommon during a pit-stop.  I'm sure the team has practiced it, because that's their job, but probably not very often. 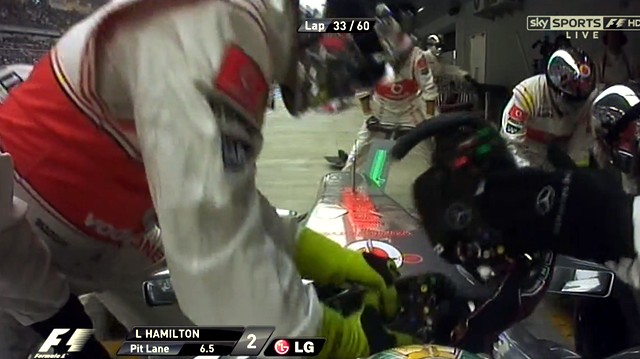 One second has passed since the car stopped.  Hamilton has pulled his steering wheel off and is handing it to a mechanic.  A second mechanic is leaning into the cockpit and has already put the replacement wheel in place.  A moment's more work is all it will take for it to be locked in place. 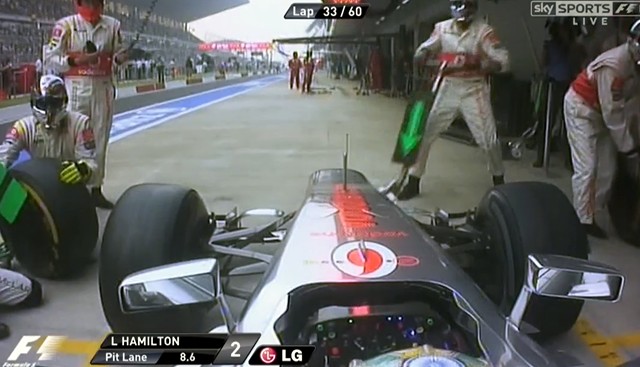 3.1 seconds since the car stopped.  All four tires have been changed, the car is off the jacks, Hamilton has the car in 1st gear and is about to roll.  According to Timing & Scoring, he was stopped for a total of 3.3 seconds... not the fastest of the race, but certainly the most complex, and the one that had the most possibility of disaster, because when the wheel is removed, in theory the electronics are uncontrolled.  The car could have shut down; it didn't.  A heckuva stop from the Team from Woking!

*MOOOOOOO-OOOOVE OF THE RACE:  It's probably mean of us to do this. 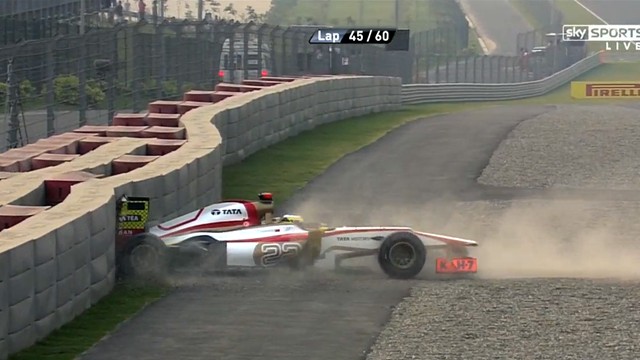 A brake failure made Pete Rose spin away and into the wall on Lap 45, as opposed to driver error, but it's the worst bit of driving we saw all day.  Sorry HRT, sorry Pete... here's your Moo.


"It was a very good race for us, and I'm happy with the result." - Seb Vettel (note: real quote)

"Dear god, give me a car that can win a race and I can beat that snotnosed brat." - HWCBN(UCC)

"Why does my car keep breaking, yet his may as well be made of unicorn farts and rainbows?" - Mark Webber

"We practiced that wheel change during pre-season testing, but not since.  Gotta give it up to the mechanics!" - Shiv Hamilton

"It was so close, so tight, yet so clean." - Jenson Button (note: real quote)

"After a few laps, the pit wall told me to save fuel.  I spent most of the race unable to go fast.  Or maybe that's just me." - Felipe Massa

"Thank you for not arresting our team owner!" - Nico Hulkenberg

"I didn't kill anybody." - Lettuce Grosjean

"A pitstop beats my pass?  What, am I sleeping with the F1U! team's girlfriends or something?" - Bruno Senna

"...but next year, Shiv Hamilton will make all the difference, right?" - Nico Rosberg

"We should just forget this race and look to Abu Dhabi." - Gandalf Kobayashi (note: real quote)

"It was a race to forget." - Jules Vergne (note: real quote)

"It was an unlucky race for me." - Mahamandaleshwar Maldonado (note: real quote)

"The car was great all weekend.  It was a good race." - The Red Menace (note: real quote)

"It must be nice to have a good attitude." - Heikki Kovaleinninninninnie

"Is anybody reading this far down, or are you just looking for the newest episode of Tooned?" - Charles ToothPic

"I'm looking forward to Abu Dhabi, which is a sign of a deranged mind." - Tim O'Glockenspiel

"Tooned is pretty good this week, I don't blame you for wanting to skip ahead." - Narain Kittylitter

"I bet McLaren is happy to have me coming on board now!" - Sergio Perez

And that brings this installment of F1Update! to a close.  Next week we're in Abu Dhabi for the worst of the Tilkedromes, joy!  See you then!

And now, Ep09 of McLaren's Tooned!

1 Thought the first lap had a good bit of frantic racing, with Alonso and both McLarens running three wide through a couple of the corners...

Can we yell at Pirelli for a little bit? Cars running 30 laps on the soft tires -that they qualified on- without noticing a performance degradation? Seriously. Whatever happened to tire strategy? When Vettel can put 34/60 on the soft tire compound, there's simply not enough degradation going on. There should at least be an idea of tire strategy, not just "okay, soft first, run run run, then hard, finish on hard" for everyone from the leaders down to HRT.

2 I refuse to complain about Pirelli's tires.  They're doing exactly what the FIA has asked them to do, and they're doing it very well indeed.  On this track, with its nigh-on kilometer long pit lane, the teams would be doing everything possible to avoid multiple pit stops anyway; the tires just fell to them this race.

And to be fair, most drivers only got around 25 laps out of the softs; six got 30 or more, but Vettel's 34 was the most.  Even Pirelli seemed surprised at how well the tires lasted in India.

3 He Who Can Be Named (Under Certain Conditions)?

4 Nevermind, just saw the comments on the previous post.