A rather burly line of storms is in the process of floating over Duckford and Pond Central as I type... 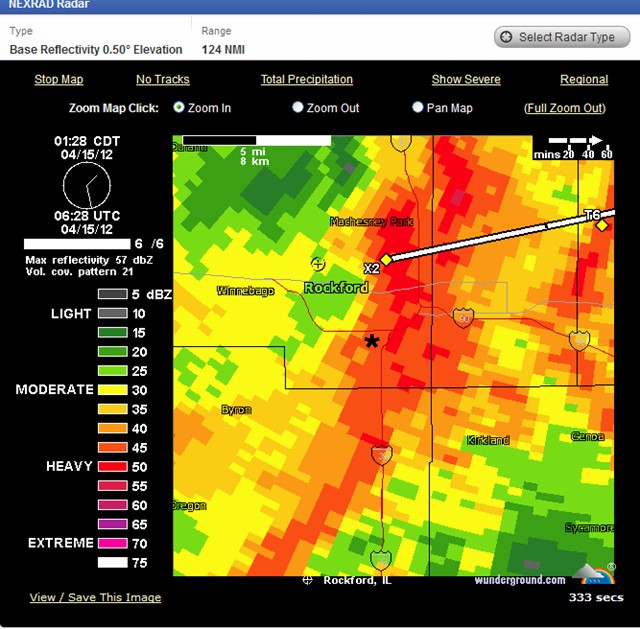 The "*" is a pretty good generalization of Pond Central in relation to the rest of the city... and where the thunderboomers are... or were.  It's bucketing rain, and there's been some big bass rolls of thunder, but that's all.

Unfortunately, my DISH satellite signal has packed up and gone away.  "Total Signal Loss" is the message, which means who knows when it'll come back?!?  Of course, as I type this, SPEED's coverage of the GP of China has begun, and I'm staring at the "Total Signal Loss" message.

1 That was my frustration with the otherwise stellar DISH service.  Anytime a good solid thunderhead rolled through, no more satellite.  Light, non-rain producing clouds, no problem.

2 House that I bought in Tracy came equipped with an ancient dish from the Echostar system. It was mounted on its own post in a good chunk of concrete, because I doubt you could attach that monster to the hourse safely. Previous owners did not bother to uproot it before sale. The electronics was all gone, except for the receiver horn. I built a little adapter to put the DirecTV LNB in the focus of the dish and received a storm-proof system. Amplification of that dish was unreal.

3 I wish I had that last night... turns out I lost the last 10 laps of the race on my recording.  Worse, when I reached that point on the recording while watching the race, the DVR locked up and crashed the whole receiver.  Woo-hoo!

4 (I shifted to the BBC/SkyTV d/l though)