F1 on NBCSN: Japan 2016 From Sepang International Circuit, the F1 Circus packs up, trundles over to the Kuala Lumpur (Koala Lumper!) International Airport, just across the street.  From there, it's a surprisingly long 9-1/2 hour flight to Chubu Centrair International Airport, located on a manmade island just off the coast of Tokoname, Aichi, Japan.  After that, it's a simple 90 minute drive to the location of this week's race, Suzuka International Racing Course, home of the 2016 Grand Prix of Japan!  Here's the track map for this, my favorite circuit on the F1 calendar: 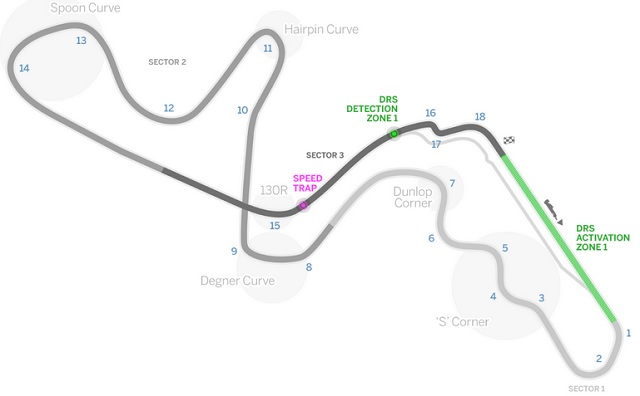 Once a fearsome beast of a track, it has been tamed somewhat in recent years.  The legendary 130R was straightened a bit via a double-apex turn, Degner was made into two turns instead of one big sweeping bend, and the final chicane was first added, then moved closer to 130R.  Despite all this, Suzuka is still one of the premiere tracks in F1, and the only one with a figure-8 layout.  Not that there's many of those worldwide or anything.

It's also one of the favorites of the drivers.  Not just because of the feeling that you're actually going somewhere, something you don't get at the Tilkedromes, but because of the Japanese fans.  Only at Monza might you find a more passionate bunch, and no fans are more knowledgeable.  And if there's a Japanese driver in the field?  Bedlam.  And if by chance he ends up on the podium?  You get the 2012 post-race experience, with the entire crowd chanting Gandalf Kobayashi's name.  Thrilling stuff.

All times Pond Central of course, because Pond Central time is best time!  And sometime after the race, F1 Update! will be along with another thrilling and exciting writeup of the race (note: may not be thrilling or exciting).  Join us, won't you?

1 What's the over-under on how long it takes for Hamilton's car to self-destruct again? (Just kidding...)

F1 Update!: Malaysia 2016 A slightly cloudy day greeted the assembled F1 Circus as they rolled into their positions on the starting grid.  It had even cooled off somewhat, all the way down to 91° with high humidity!  That was the ambient air temperature, though... the track surface, which radiates its heat like nobody's business, was 131°.  It was so hot that there were concerns that the tires would work very well, but degrade at an increased rate.  Polesitter Lewis Hamilton and his teammate Nico Rosberg, the current Driver's Championship points leader, were side-by-side, staring down at the first turn.  Which would seize the early advantage and be the first through it?  And would the twin Red Bulls, directly behind them, have anything to say about the matter?  THIS is your F1 Update! for the 2016 Grand Prix of Malaysia!

*LIGHTS... OUT?:  Before the race began, the heat was causing problems.  The Williams of Retired Massa stalled on the grid as the field went off on their recon lap and was pushed to the pit lane.  The team would get him restarted, but he would be forced to start from there.  That was probably for the best, because the start itself was a shambles.  First came a very long pause before the starting lights began to illuminate.  When the field is judged to be correctly positioned on the grid in preparation for the start, the Race Director presses a button.  That button triggers the start sequence, which includes a random amount of time from press to first light.  On this occasion, the random amount of time was the longest we've ever seen, somewhere between five and 10 seconds perhaps.  It was long enough that the Legendary Announce Team was assuming the start had been aborted for some reason.  When the five lights finally illuminated then extinguished, Lewis Hamilton and Nico Rosberg both made good getaways, the two Red Bulls slightly less so.  But the Ferrari of Seb Vettel, starting fifth, made a stormer and charged up the inside approaching the first turn.  The problem was, he didn't have the brakes to do what needed to be done and wound up running directly into the side of Rosberg as he began the turn.  The Mercedes wound up facing the wrong way and dead last, the Ferrari's front left suspension was turned to mashed potatoes, and Lewis Hamilton had to be thinking that he would be leading the championship in a couple of hours.

*THE MUDDLE IN THE MIDDLE:  While Hamilton cruised at the front of the field, the two Red Bull drivers were engaged in a knife fight for second that lasted most of the race.  First Smiley Ricciardo, then Embryo Verstappen, then Ricciardo again, held second place, while the other driver tried to figure out a way to get by without pissing off the pit wall.  At one point, the two of them were side-by-side going through the complex of twisty turns at the start of a lap at Sepang, but the Australian managed to hold on to second place at the end of it.  Meanwhile, the Ferrari of Kimi Raikkonen was lurking behind them.  Soon enough, however, Nico Rosberg was back and hounding the Ferrari driver for the spot.

*TEN SECONDS:  The two played fox and hound for a good while.  Rosberg, realizing his chances of a podium and trying to keep pace with his obviously-winning teammate in the championship, made a move on Lap 38.  He dove to the inside of a left-hand turn, hip-checked the Ferrari out of the way, and took the position.  The race stewards took a dim view of the physicality involved with the move and handed the Mercedes driver a 10 second penalty... meaning that amount of time would be added to his final amount.  If Raikkonen could finish within 10 seconds of him, he'd get fourth place, not Rosberg.  The Merc began to pull away, but slowly.

*KABLAMMO:  And then something occurred that changed everything. 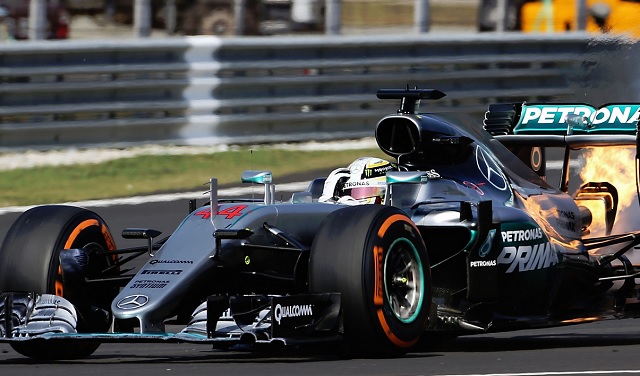 On Lap 40, a radio call came in from Lewis Hamilton: "Oh no, no, no, no!"  His engine lost power, a stream of smoke come from the rear, which was soon joined by a burst of flame, probably as the turbocharger grenaded itself.  His lead over second place was over 12 seconds at the time.  Suddenly the little tiff the two Red Bulls had had a few laps earlier was looking very important indeed, and the Rosberg/Raikkonen dust-up was for the the final step of the podium.

*THE END: Lap after lap, Verstappen lurked close behind Ricciardo, at one point even closing down to DRS range.  But either he couldn't make a move, or was told not to, because he eventually dropped back and finished the race a couple of seconds back.  Behind them, Kimi Raikkonen gave it a good effort, but eventually the advantages of the Mercedes took their toll and Rosberg opened his lead over the Ferrari to over 12 seconds and thus finished third.

*AFTERMATH:  "I can't believe that there's eight Mercedes-powered cars and only my engines have gone," Hamilton said afterwards.  "Something doesn't feel right.  But it's just odd.  There's been 43 engines for Mercedes and only mine have gone.  Someone has to give me answers, and it is not acceptable.  Something or someone doesn't want me to win this year."  Ladies and Gentlemen, we have a conspiracy theory!  Hamilton now trails Rosberg by 23 points with five races remaining and a maximum 125 points left to play for.  This is only the second race this season won by someone other than the Mercedes drivers, and both of those wins were by Red Bull.

Next week, we're going to be in Japan, and you'd best believe that Hamilton is pissed.  We'll see you down the road!

1 ...late night visits to the garage by a man with a German accent...

2 Well, it's not paranoia if they really are all out to get you, Lewis...

F1 Quals: Malaysia 2016 A threat of rain hung in the air at steamy Sepang, the home of the Malaysian Grand Prix.  The heat and humidity actually claimed Red Bull driver Embryo Verstappen, with the young driver passing out after exiting his car at the end of Practice 1.  Of course, that's nothing in comparison to the heat Kevin Magnussen had to deal with.  It was still hot for Quals, but would the impending rain affect the starting lineup?  Here's the provisional grid for the 2016 Grand Prix of Malaysia:


Fernando Alonso changed multiple pieces of his engine and the gearbox, giving him a 45 grid spot penalty before Quals began.  As you can imagine, he didn't exactly go all out in his efforts today.

Other than that?  It's all pretty much by rote.  The Mercs are clowning the rest of the field, Red Bull actually looks pretty decent (but not that decent), Ferrari is grumpy, and there's a whole lot of two-by-two going on all the way down the grid.

I'd love to be more excited about the race, but boy, it's looking awfully familiar right about now.  There's a lot of complaining about the reprofiled final turn... it's universally hated... but other than that, there may not be a whole lot of excitement.

F1Update! coming sometime Sunday... it's an early race, after all... look forward to it, won't you?

1 Man, that fire was really scary to look at. I'm glad he wasn't harmed in any way. Hooray for firesuits!

2 According to the team, they were testing a series of new parts on the car.  One of them malfunctioned, allowing fuel to flow up and out of the relief valve (which can be seen in the video).  Once that hit someplace hot...

Kudos to the brave guy who hooked up a fuel bowser to the car to try and drain it... he had a firesuit, but the mechanic that wound up helping him seat the hose did not.

I've always wondered why the mechanics don't wear their full kit when the cars are on track.  I know its because they'll be doing maintenance work, and the suits make it harder to do that, but... well.