Deforming There was a nasty wreck during the ARCA series race at Talladega today.  Austin Self got a little squirrely and spun in the tri-oval, not an uncommon occurrence.  As his car flailed around, it caught the hard-charging car of Brad Smith right in the nose.  Along with the obvious damage, Smith's throttle was stuck open.  He went up the track, smacked the outside wall, and then...

Rescue crews actually had to cut Smith from the wreckage of the car, but he was able to walk under his own power to the ambulance, though unsteadily.  Taken to the infield care unit, he was later helicoptered to the nearby University of Alabama-Birmingham Hospital for further observation.

I mention all this because of a screenshot I saw of the wreck... to whit, this one: 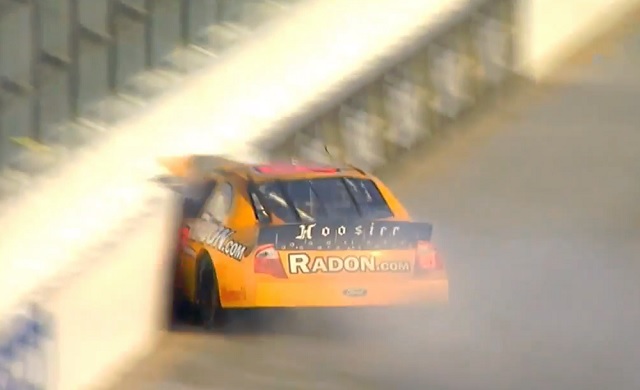 The particular stretch of wall that Smith impacted had what's called a SAFER (Steel And Foam Energy Reduction) Barrier installed in front of it.  When hit, it's designed to crumple like a beercan, reducing the strength of the impact before the car makes contact with the concrete wall behind it.  That's why Smith's car looks like it's smooshed to half its size: part of it is inside the SAFER barrier.

During the NASCAR Xfinity race at Daytona back in February Kyle Busch had a similar accident, except the wall he hit notably didn't have the SAFER barriers installed.  He suffered a broken right leg and left foot.  Certainly there were differences: impact angle, size and weight of the cars, so on and so forth... but that one man could walk away and the other is sidelined and will remain so for an unknown amount of time may very well come down to the way the wall deformed.

F1 doesn't use SAFER barriers; instead, they use tire walls which really do much the same thing, or TECPRO barriers at four or five circuits.  TECPRO is the same idea as SAFER, just with much more foam and less steel.  It's used mostly at Monaco, where it protected Sergio Perez from what would have been a catastrophic injury in 2011.  Compare that accident to Jenson Button's in 2003, when they had a tire wall instead... no give at all.

In most cases for F1, tire barriers are sufficient.  Walls are usually far away from the track, and when they're not, a car isn't likely to hit them (on straightaways, for example).  Tire barriers are "good enough" in those circumstances, combined with the way F1 cars are designed to absorb impacts.  A SAFER barrier might actually hinder the way a F1 car takes damage, come to think of it.

Well, there you go.

1 There was a LOT of what looked like burning fuel under Smith but as he finally returned to the grass it looked like it went out.

2 I cringe a bit when I hear people joking about "only go to the car races to see the crashes." Man, have you been IN a car crash? Can you imagine being in one at THOSE SPEEDS? Gaaah.

3 Mauser, it was *probably* an oil fire, figuring from where it looked to be coming from.  A fuel fire would have been a lot bigger.

4 Don't most F1 tracks - not Monaco obvsly - also have wide run-off areas with soft surfaces, so you're going to have lost a lot of energy already before you hit whatever they're using for a barrier?

5 In many cases, yes, Alan.  Ergo "walls are far away".  But that's not always the case... for example, the pit straight of every track has walls right up against the racing surface.  Eau Rouge / Radillion at Spa are flat-out corners with not a whole lot of runoff.  They have tire barriers, but I wonder if they're as effective as SAFER.  Easier to repair, though.

In a lot of cases on F1 tracks the runoff areas are hard surface, either packed earth or actual pavement. All they do is give the driver a bit more time to regain control of his car before he hits the wall.

For instance, if you blow turn 1 at Austin, you get 70 meters of paved runoff area, and then you Tee right into a barrier.

7 Actually, I think I'm wrong about Austin. Now that I look closely, I think there's a gravel pit before you hit the wall.

8 Kittylitter confirmed.  I don't think anybody's reached it yet... since it's at the top of Phil Hill, it would pretty much require someone to try and beach themselves.

9 Boy, that brings new meaning to the phrase "I really gotta go".