First Episode Writeup #4 I find that I'm enjoying these one episode writeups!  There's no long-term commitment involved, I'm not devoting myself to watching the entire series, I can pull out every joke I can think of and use 'em all at once, it's great!  Even better, if I miss a plot point or something, it doesn't matter!  For example, in my very first series writeup (Ga-Rei Zero) I completely missed the significance of the blue butterflies and the gray-haired prettyboy in the first episode... who knew he'd be the Big Bad?  As an aside, after re-reading that series of writeups, I should go redo them in my improved style... hm.  Food for thought.  Anyway.  We're not here to discuss that series, we're here to discuss a new First Episode Writeup!  What poor show gets the patented Wonderduck treatment this time around? 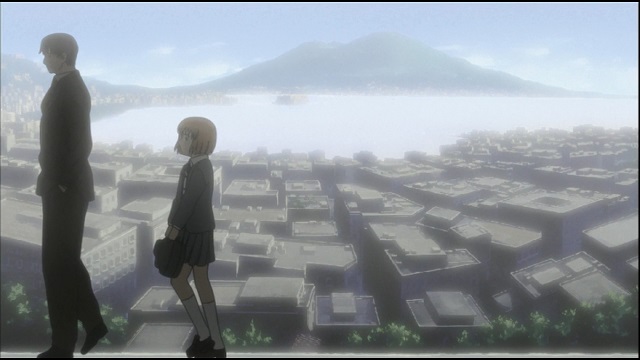 People call them brother and sister.  Sure, there's a 20 year age gap between them, at least, but that's not too strange, right?  Right?  Neither is the glowing way she looks at him, like the look an adoring golden retriever gives her master, that's not weird for a little girl at all.  What IS weird is the perspective on this shot, which makes it look like the two of them are walking in front of a projection of the City of Townsville town below.  Never mind the viola case she's holding... yes, I said "viola."  Not violin.  Viola.  Because the viola doesn't get enough love in this world, it's such a mellow sounding instrument, not all squeaky and screamy like the violin.  If it turns out to be a violin she's carrying, so be it.  Until that time however, it's a viola because this is my writeup, darnit.  Meanwhile, in another part of the anime... 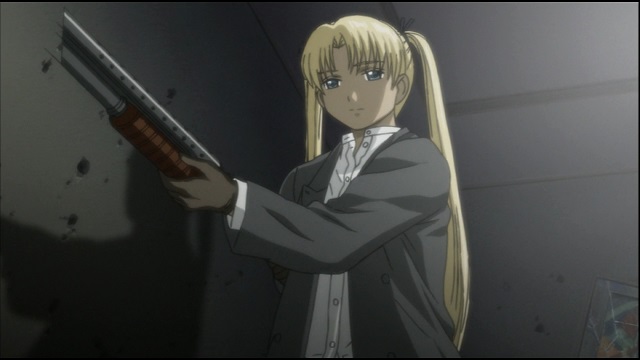 ...a graphics glitch has rendered another young girl's shotgun useless.  So many things in that sentence I never thought I would ever type.  For such a great looking show and trust me, it is though we haven't quite gotten to that part yet, that's a fairly egregious mistake... particularly because it occurs twice. 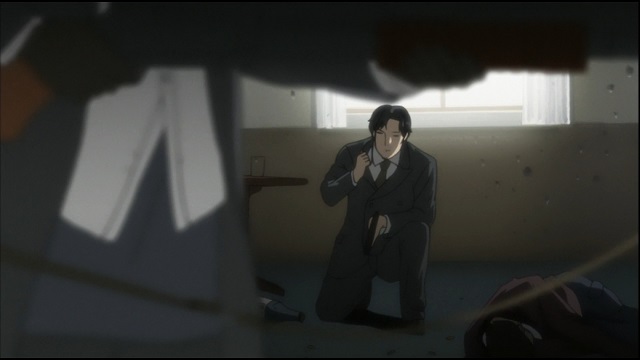 It turns out that the young girl, who is named Triela, is paired with an older man as well, named Hilshire.  They seem to be part of some sort of paramilitary/police special forces unit, and their target wasn't there... which means it's at the other target.  A target that... 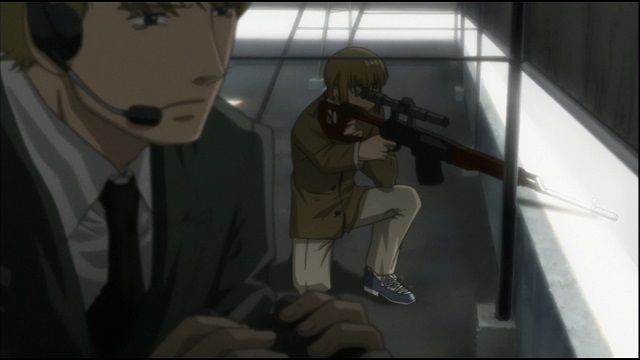 ...is being watched by yet another heavily armed young girl/older man combo.  Her name is Rico, which seems like a fairly unlikely name for a girl.  His name is Jean, which means that the two of them should probably switch names.  There's also a lot of regular agents standing around looking inconspicuous.  Inside a nondescript apartment in the building being cased... 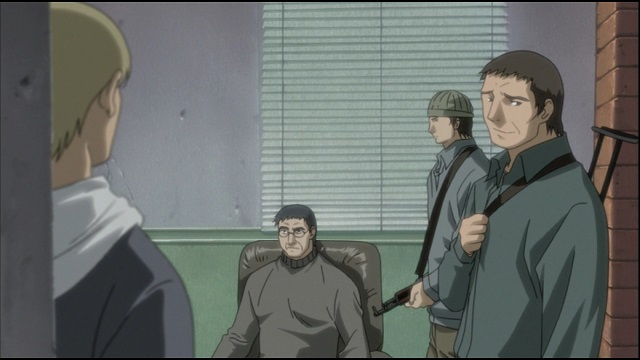 ...a bunch of malcontents and neer-do-wells are gathered.  They've just received word that their other safehouse has been hit, which rendered it not so safe.  Oh, and the informant said that young girl did most of the damage.  The man on the right rolls his eyes and looks dubious at this news.  And rightfully so... little girls being used as assassins?  Preposterous!  What are they gonna do, hit us with Hello Kitty and My Little Pony plushies?  The doorbell rings and someone we will call Skippy goes to see who's there, chuckling under his breath: "Hello Kitty plushies." 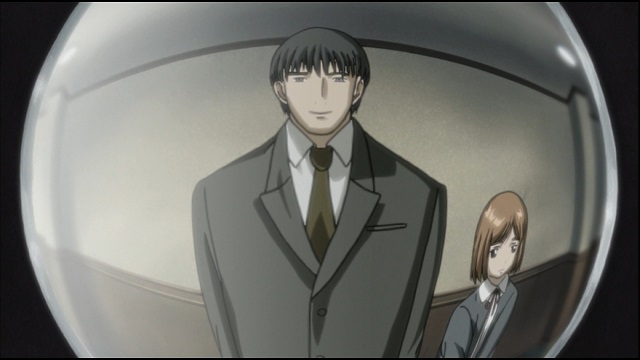 1 Well, if you want to fit a Thompson in an instrument case, you could always go for a stick magazine.  But for sheer compactness, you might want this bad boy.

2 Given the way the Thompson is placed in the violin case, how exactly would the stick magazine make it any more ready-to-use?

3 It would lay flat, as opposed to the perpendicular bulge of the drum.  But it might be longer that the case could cover.  If you went to the 20 round stick... well, you may as well carry a brace of 1911's.

4 I just received and read the final two volumes of the manga.

Now I kind of want to re-watch my GSG box (first season; I didn't get very far into the follow-up season, which was poorly animated IIRC).

5 I didn't get very far into the follow-up season, which was poorly animated IIRC.

You remember correctly... mostly.  The animation itself was fine; it was what was being animated that stunk.  Which is a damn shame, the storyline was better than in Season 1.

Yes You Can While I'm putting the finishing touches on the fourth "First Episode Writeup", I want to address something that our friend Steven said a couple o' days ago.  To whit: "You can't go wrong with red half-rim glasses."

Steven, Steven, Steven... oh, my friend, have you forgotten?  THIS IS ANIME!  Saying things like that are like poking a duck-billed platypus with a stick... everything is fine until it leaps at your face, wraps its front legs around your head, then jams its ovipositor down your throat while it rips at you with the spurs in its hind legs, spurs that are coated with a strong neurotoxin that'll leave you in agony for months, during which time its alien babies dig their way slowly out of your body via the soles of your feet.

Here, let me show you what I mean. 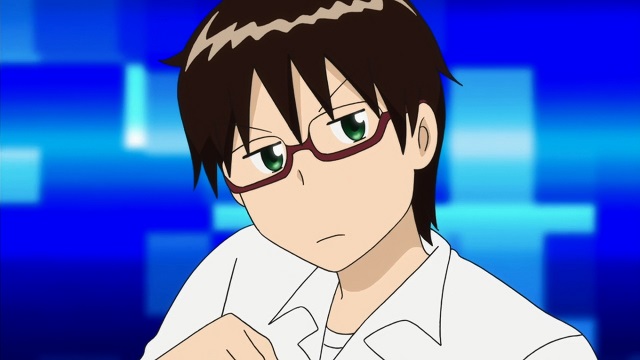 1 Sorry, but this is wrong.  Platypodes don't lay their eggs in live prey.

2 I saw some grey half frames in a show I recently finished watching, but I know they don't count.  And even if they did, I'd keep it to myself.  It's a horrible, shameful fetish that I can't believe someone would actually be open about....

3 Sorry, but this is wrong.  Platypodes don't lay their eggs in live prey.

Oh, Pixy... that's what they want you to believe.

4 You can't go wrong with red half-rim glasses on a girl. 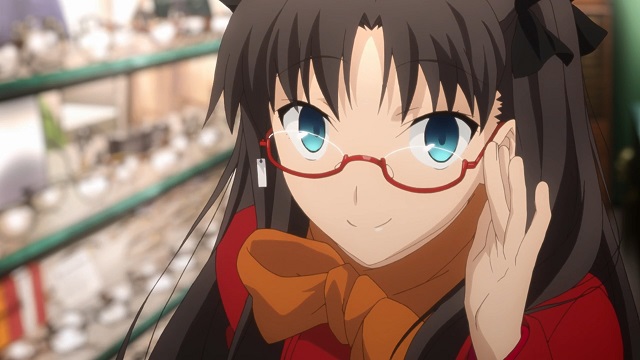 Have I missed anything yet?

2 Yes, you have missed something!  Early this morning, a secret cabal voted on a plan to [REDACTED]

3 Well, I figured you wouldn't want to miss this:

4 I'm disappointed that you thought I would miss it, Mauser!  I'm kind of thinking that it's the unedited version of this one from four years ago.

Either that or Andy Gulden has this thing about driving when it's -16° Celsius... that's three degrees in normal units, by the way.

5 Well, at least I got you the uncut version! I was thinking of you!

Some of the related videos were vaguely amusing.  Apparently they let just about anyone on that track.

6 Anybody with 27€ and a running vehicle can turn a lap on the Green Hell, Mauser.  They're responsible for any repairs needed when they're done, however.

In other words, if you stuff your sleek new Mercedes into a steel barrier, you're on the hook for the cost of replacement of said barrier.