Mini-F1Update!: United States 2014 A beautiful day, the type you only get in the American West, greeted the F1 Rancheros as they brought their steers to market steeds to the lights.  As has become the norm, the two Mercedes drivers led the rest of the pack to the grid... which would get home first?  THIS is your Mini-F1Update! for the 2014 United States Grand Prix!

*LIGHTS OUT SAFETY CAR:  It wasn't really that fast, but close.  Roughly half-way around the first lap, the Force India of Sergio Perez bonked the rear of Kimi Raikkonen's Ferrari, then did unspeakable things to the Sauber of Adrian Sutil.  While the Red Car was undamaged, Perez suffered a nose removal and suspension damage, and Sutil came to a halt sideways on the racing line.  Immediately a Safety Car was called out, one that lasted four laps as sweepers manned their brooms to clean up the immense amount of carbon fiber shards.

*BACK WE GO:  Once the safety car went away, Rosberg held the lead easily through the first round of pitstops.  Once the two Mercs were on fresh rubber, however, things changed.  For whatever reason, the new tires sat better on Hamilton's car.  He immediately began to whittle away at Rosberg's lead, passing him on Lap 24.  While his lead would never get much higher than three seconds, it also was never under any sort of threat, either  Hamilton would win the race by a couple of seconds over his teammate, opening his driver's championship lead to 24 points with 75 points available.

*IN OTHER NEWS:  Lotus' Pastor Maldonado earned his first point of the year today, bringing the team's total to nine.  Last year, they scored 315.  It's impossible to imagine any team having a more desperate season than that.

*DRIVER OF THE RACE:  4Time Vettel.  Starting from the pit lane due to an engine change, he wound up enduring four pit stops.  The last came with eight laps to go, and dropped him to 13th.  By the end of the race, the fresh rubber had allowed him to go insane, jumping up to 7th... and with one more lap, he may have caught HWMNBN for 6th.  Not too shabby, that.

*MOMENT OF THE RACE: Hamilton's pass of Rosberg on Lap 24.  Under normal rules, it would have almost guaranteed him his second world championship.  As it is, he's still in good shape, but one mechanical glitch could cost him everything... despite having won 10 races to Rosberg's four.

"Did you know that the Australian version of the 'cowboy' is a stockman?" - Daniel Ricciardo

"Which is also the name of an album by Steely Dan.  Finland doesn't have cowboys, unless you count the ones that watch the reindeer herds." - Valterri Bottas

"The cowboy tradition originated in Spain, leading to the vaquero of Mexico." - HWMNBN

"There's a certain subset of Germany that's obsessed with the American Old West.  An author named Karl May who wrote dozens of German Westerns, despite never having visited America, is to blame." - 4Time Vettel

"The Jutland region of Denmark has a very 'Old West' feel to it, even today." - Kevin Magnussen

"Venezuela is nigh-on the birthplace of cowboys, except we call them llaneros." - Pastor Maldonado

"In France, we have gardians, who herd cattle in Provence." - Jules Vergne

Next weekend, we're in Brazil!  See ya then. 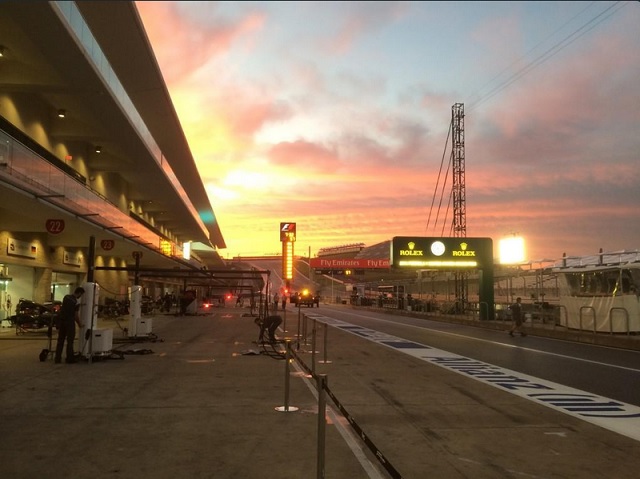 A surprisingly chilly day greeted the F1 cowpokes as they guided their steeds onto Austin, Texas' Circuit of the Americas in preparation for Sunday's US Grand Prix.  Which of 'em would be named sheriff, and which would be dangling from the end of a rope?  Let's take ourselves a look at the provisional grid:


If you ask the Legendary Announce Team, it's something of a miracle that Rosberg and Hamilton made it to Q3, let alone lock out the first row.  Both Merc drivers have been dealing with technical difficulties all weekend, the type that make engineers pull out their hair, mechanics lose sleep rebuilding entire cars to find a single mistinned lead, and drivers throw hissyfits while spilling their energy drinks.  Rosberg seemed to have a side-to-side brake balance problem, something that you almost never hear of in F1, while Hamilton was having shifter difficulties.  Both of these "miraculously" cleared up before Quals, which saw Hamilton make a teeny bobble in Q3 to give his teammate pole for Sunday's race.

Last year, 4Time Vettel won this race, with Lettuce Grosjean standing next to him on the podium.  Quite the difference a year can make.  Grosjean just has a miserable pile of scrap for a car, and Vettel, knowing that he has to start from the pitlane for using a completely new powerplant (his seventh, one beyond the limit), barely even tried.  The talk was, in fact, that he wouldn't even appear in Quals, until someone pointed out that put his ability to race in the hands of the Stewards (for not setting a time within 107% of the fastest time in Q1), officials who were already in a foul mood because of the loss of two teams.

Hail Adrian F'n Sutil for finally giving Sauber their first appearance in Q3 this season... and if that isn't a terrible proclamation, I don't know what is.

Actually, I do know what is.  There's at least a chance that there will only be 12 cars taking the lights tomorrow.  To protest the incredible imbalance between the financial situations of the big teams and the smaller ones, Lotus, Sauber and Force India have been linked to a boycott of the race.  All three teams have been reported to be suffering financial difficulties, and to be fair, F1 is completely cocked up when it comes to the money situation.  For example, the 2013 payout was something like $900 million... and Ferrari got $100 million right off the top simply because they're Ferrari, over and above their prize winnings.  That right there is more than the annual budgets of either of the two teams missing this week, Marussia and Caterham.  Something does have to be done about this imbalance, and this threat is a good way to draw attention to the problem.  The three teams can absolutely kill any chance F1 has to get back into the US long-term (remember the 2005 debacle?), and what do they care?  As is, none of them will be around in two years, driven out by the manufacturers.

Someone from Lotus tweeted that they'll be racing, but team boss Gerard Lopez was quite angry at yesterday's team principal press conference, which makes for quite eye-opening reading.  Will they go through with the boycott?  Probably not, but we won't really know until the teams form up on the grid for the lights.

Tomorrow could prove to be quite interesting!  See ya then.

2 Does griping about Ferrari ever work?  Or is Ferrari excused from whatever deal comes up to keep one or more teams marginally competitive?

Or, considering I really don't know what I'm talking about, am I barking up the wrong tree?

3 I've never had any success with my complaints, Ben.  I dunno, maybe F1 doesn't listen to me!

Ferrari is the keystone team for F1; in some quarters it's thought that if Ferrari left Formula 1, the league would shut down overnight.  In others, they're considered a major part of the problem.

You can guess which side I come down on.

4 I didn't mean you specifically...just, based on what you've written in the past, apparently Ferrari has *no* incentive to share.  There's no F1 without Ferrari, so Ferrari mostly gets to do what they want so long as the advertising revenue flows.  So, is there a Ferrari without F1?  Is it even feasible for the other teams to tell Ferrari to take a hike or get in line?

5 Hey, both can be true at once. Ferrari gets special treatment precisely because it makes it tough for the entire slate of teams to act collectively against Formula One Management, which is important, because FOM takes about half the money! It would be easy for the teams to build another series at most of the same tracks as F1, but with every team making more money... but Ferrari isn't likely to jump into a situation where they get "just" equitable treatment, their rivals aren't going to sign the Ferrari Bonus over to them, and it would be very hard to get "everyone but Ferrari" on board.

6 I am of the opinion that Ferrari needs F1 more than the opposite is true, or at least I was until recently.

NOW, if Ferrari leaves, what with the rot setting into the smaller teams and even the bigger teams having problems getting sponsors, the whole thing might topple over and fall into the swamp.

I'm not convinced that would be a bad thing.

7 Yeah, honestly, I fully expect enough teams to fall out at some point that Formula One has a completely disrupted season.

I don't think that three cars per team is necessarily BAD - I mean, Rosberg and Hamilton have had some good racing this year, would it have been worse if it was Rosberg and Hamilton and, say, Hulkenburg? I don't know that you can do both that and "oh btw Red Bull has two different teams" though - at that point rather too much of the sport is being run as marketing for an energy drink company, and that's an inherently unstable situation, no?