F1 On TV: Montreal 2008! This week, the F1 Traveling Circus makes its lone stop in North America for the Grand Prix of Canada.  The Circuit Gilles Villeneuve has gotten an off-season facelift in the wake of last season's nightmare crash of Robert Kubica, with a modification of the walls that contributed to the accident.  The towering launch-ramps they called 'curbs' have gone as well, replaced by something more humane. 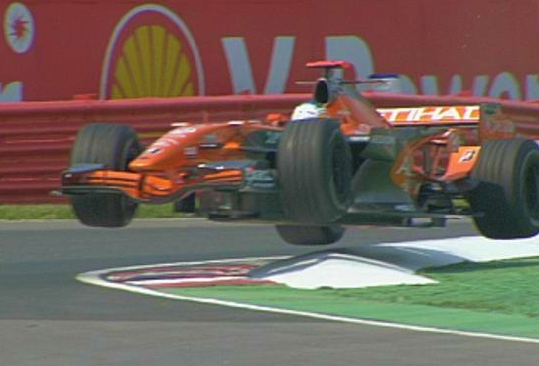 Houston, we have liftoff...
This is a good thing.

The track is known as the roughest on the calendar on brakes.  A long, relatively narrow circuit, it has some very long runs at high speed, followed by heavy braking, rinse, repeat. 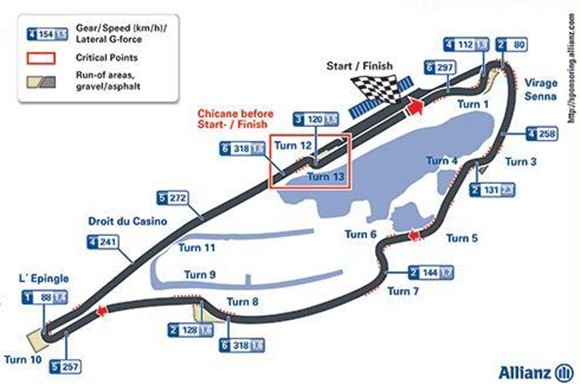 Track-map brought to you by Allianz: "We do things with other people's money."
For the record, Kubica's accident took place roughly around the location of the red arrown between turns 9 and 10, more or less.

Turn 13, the second half of the chicane leading to the start-finish line, is also the location of The Wall of Champions, so-called because of all of the drivers that have gotten the turn wrong and smacked the barrier just beyond it.  Of course, with the curbs reduced, maybe that won't happen as much now.

Either way, we'll get to see it all, thanks to our friends at SPEED and FOX.  Yes, that's right, we're now in the part of the season where coverage will be broadcast on the big network.  Prior to last year, this was when fans across America would be driven to applying ice-picks to their eardrums by the miserable announcers (anybody remember Derek Daly's "crashing" fiasco?); thankfully, Fox is the parent network of SPEED, and therefore The Legendary Announce Team will be doing the call of the race.  The only difference will be that Peter "Smarmy" Windsor won't be doing his usual grid-walk.  What a shame.

SPEED, however, starts us off with LIVE coverage of Friday's second practice session from 1p - 230p.  Let's see if we have another near-thing with marmots throwing themselves at the tires of Toyotas!

Sunday, though, coverage moves to FOX with the Grand Prix of Canada itself, from 12n - 2pm.  SPEED will bring us a replay, complete with pre-race coverage (and Smarmy's gridwalk) on Wednesday, June 11th, from 1130a - 2pm.

So we go from the narrow confines of Monaco to the high-speed racing of Montreal... might be fun!

Those sloping curbs were not well-conceived. What were they expecting, anyway?

What is that big blue area in the middle of the right part of the track? If someone made turn 12 and missed turn 13 they'd go right into it. A hill? a lake? a sand trap? Why's there a wall there?

2 If you enter "Circuit Gilles Villeneuve" to Google Earth, turns out there's a user-entered shortcut to it. I just took a look, and that blue area is indeed water. So they put a wall there because crashing is better than drowning? That's all I can think.

3 Temporary seating is put up between the Wall and the Lac de Regates on race weekend, if I remember correctly (someone correct me if I'm wrong!).  But if someone completely blew the chicane and the wall wasn't there, they probably COULD make the lake.

As to why the lake is there in the first place?  The Ile de Notre Dame is a man-made island, created for the 1976 Montreal Olympics.  You can probably guess from the name of the lake what event was held there....  The track came along two years after the Olympics (in fact, this is the 30-year anniversary of the circuit).  You work with the terrain you have.

And the curbs were/are like that to PREVENT people from ignoring them.  Of course, if you screw up you get launched anyway (or, like American Scott Speed in 2005, you wind up high-centered on one of them), even if you're not ignoring them.  Nobody said F1 is easy.

5 Mal, the gridwalk will still happen, we just won't get to see it until Wednesday.  Fox is just jumping right into the formation lap, like as much.

Regarding the "temporary seating", I was wrong.  There's an access road there for emergency crews to get to any car that wrecks on the straightaway.

There's no way there could be seating there, because there are trees just behind that wall.

Actually, for my money, there are entirely too many trees around the course. Turn 3 is another one like that. There's a wall with a forest behind it. Turn 7 is kind of scary, too; you miss that one you either hit trees or you end up in the river. 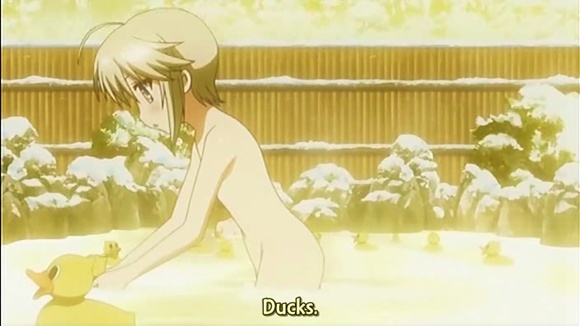 In an analysis of this scene, there are 11 ducks visible (though not in this picture, since some are blocked by Wolfie).  Multiply that by 21, and you're close to the number of rubber duckies in my collection.