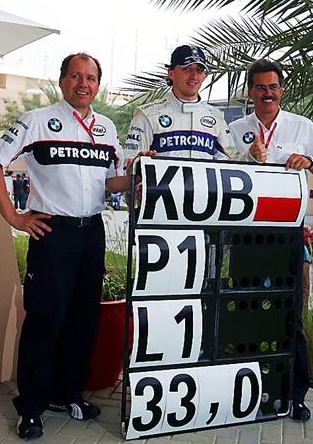 Robert Kubica took pole away from Felipe Massa, Lewis Hamilton and Kimi Raikkonen, and announced to the F1 Circus that BMW-Sauber is for real.  The team may not be quite at the level of Ferrari and McLaren, but they're not far off, that's for sure.

It's likely, of course, that Kubica has a lighter fuel load than the Ferrari and McLaren boys, but the speed was no fluke... the Pole was third quickest in Q2.  This is shaping up to be one helluva race!

Better Late Than Never: Bahrain Friday Practice! It's a practice session... of course nothing happened.

Oh, except for Lewis Hamilton destroying his car by trying to jam it through a tire barrier... sideways and backwards.  Pretty impressive, actually.  With about seven minutes left in the session, Hamilton came off a turn a little wide and got onto the curb.  That ruined the aerodynamics of the car pretty quick, and suddenly the car was swapping ends.

Sliding off the track and onto the asphalt runoff area, he had all four wheels locked up and still didn't lose much speed.  Boom, one dead McLaren.  Not as bad as Kubica's crash, or maybe even Hamilton's wreck in quals at the Nurb last season (when he got airborne and nearly flew over a tire wall), but pretty severe.

The McLaren mechanics will be up very, very late fixing that one.

The two Ferraris were fastest on the day, with the usual suspects right behind.  We'll see how it works out in quals, though.

Mosley vs The Teams. With the Grand Prix of Bahrain just a few days away, the F1 teams are starting to react to the Max Mosley "Nazi Dungeon" scandal.

BMW and Mercedes-Benz put out a joint release to the FIA to take action against Mosley, calling his hijinks "disgraceful."  The release went on to say "This incident concerns Max Mosley both personally and as President of the FIA, the global umbrella organisation for motoring clubs. Its consequences therefore extend far beyond the motor sport industry."

Echoing the sentiment, the two Japanese teams released similar statements.  Honda F1 Racing Team (as opposed to the manufacturer) stated that they are "extremely disappointed by recent events surrounding Mr Mosley and we are concerned that the reputation of Formula One and all its participants is being damaged."

Toyota Motorsports, which is based in Germany, laid down what was perhaps the most scathing reply to the incident, saying that they "(do) not approve of any behaviour which could be seen to damage Formula One's image, in particular any behaviour which could be understood to be racist or anti-Semitic. Senior figures within any sport or business, including motorsport, must adhere to high standards of behaviour. When all the facts are known, it will be for the FIA to decide whether Mr Mosley has met the moral obligations which come with the position of FIA President."

Mosley himself has refused to step down from his position as FIA President, and has called an Extraordinary General Assembly of the FIA governing body as a whole, to meet at the earliest practical date.  While some believe that the meeting is being called so he can announce his resignation, Autosport Magazine is saying that Mosley will ask for the organization's backing.  The meeting will not be anytime soon, however, as the FIA Senate comprises 200 members from many different racing disciplines.

While the condemnations are certainly interesting, I find fascinating those who AREN'T saying anything.  I would have expected Ferrari to have at least given some support to Mosley, perhaps in a statement such as "until all facts are known, we blah blah blah."  Instead, they've been completely quiet.  McLaren, perhaps the team that above all others would cheer for Mosley's leaving, has said nothing officially, preferring to let Mercedes do the talking.  And with a Gallic shrug, Renault has been totally quiet.

If any of those three teams says something either positive or negative, you can bet that Mosley's fate will be sealed, one way or the other.

Again, the official stance of F1 UPDATE! is that Mosley should either leave on his own, or be pushed out the door.

1 It ain't F1, but there was a terrible one-car crash in NASCAR. The car didn't burn, and the driver walked away from it. Truly astounding.

2 I got back from the folks' place around 9pm tonight, turned on the TV (which was on SPEED, of course), and saw that very accident "live" (actually on replay from earlier today).

The car DOES burn, but not until it's come to a complete halt.  The driver did walk away, though he had a pretty obvious limp.  Of course, if that's all he got away with, that's still darn amazing.  Ugly, ugly crash... any time a car gets airborne, it's never a good thing.  When the car rolls around it's long axis two or three times while airborne, it's a very, very bad thing.

3 Whatever neck restraint mechanism they're using clearly worked very well. By all rights his neck should have been broken.

F1 on SPEED!: Bahrain '08 Perhaps unsurprisingly, the organizers of this week's race in Bahrain have... requested... that Max Mosley perhaps not appear at the track.  He's expected to do comply with that request.

However, we're still invited via the good folks at SPEEDchannel, and the schedule for the TV coverage is what this post is all about!

Friday, April 4th, brings us LIVE coverage of the 2nd Practice from 6a - 730a.  As you're no doubt aware, Bahrain is a small, sandy island.  How small?  The F1 race distance is actually more than one lap around the island.   While that's an interesting (if pointless) bit of trivia, it's the sand that's important to the race.  The Grand Prix weekend is, essentially, the only time this track is used during the year, so the grip level is very much the definition of "green".  Throw in the sand blowing onto the track, and there's a reason the first cars on track (invariably the junior teams) are called "sweepers" by the folks in the paddock.  They also wind up sliding around like they're on ice.  Immediately following practice, stay tuned for Inside Grand Prix from 730a - 8a.  Mr. Snooty Voice is back, as is Allianz ("Sending your money into a rathole while we take insane commission charges: we're Allianz.").

Saturday, April 5th, from 6a - 730a, is the time for LIVE coverage of the Qual sessions.  It's been announced that McLaren will be moved to the very end of the pit lane this race, as befits their last-place status from last year.  This is curious, as they've been in the middle of the paddock in the previous two races.  Why is the FIA suddenly enforcing their rules now, when to date, they've ignored them?  There's something fishy going on there...

Finally, Sunday, April 6th, from 6a - 830a, the cars hit the grid for the Grand Prix of Bahrain.  Will Ferrari run away with it?  Will McLaren reassert themselves?  Will BMW break through and turn the Big Two into the Terrific Three?  And what of the mid-pack?  Will Williams, Renault or Red Bull step up and take the next step towards the podium?  Or will we see something weird, like a sandstorm in the middle of the race?  Tune in the Legendary Announce Team and find out!  For those of you who are actually, y'know, asleep at 6am, SPEED brings us a replay from 1230p - 3p.

So that's the TV schedule.  All times Central; add an hour for the East Coast, subtract two for the West Coast, add five if you're in the middle of the Atlantic.

Excellent overview of the weekend's racing.  Thank goodness they're back in a time zone with coverage that doesn't fall into the wee hours of the morning.

Hmmm...I'm beginning to think FIA makes up their rules as they go along.  If it turns out that last pit benefits McLaren, the rules will probably change again.