Mini-F1Update!: Russia 2014 It was a beautifully sunny day at Sochi as the F1 Circus, missing one member, pulled into their starting slots on the grid.  A win by polesitter Lewis Hamilton would put his teammate and driver's championship rival Nico Rosberg in dire straits indeed.  And what of the upstart Williams of Vallteri Bottas, could he make a difference?  THIS is your F1 Update! for the inaugural Grand Prix of Russia!

*LIGHTS OUT:  We'd come to discover two things about the Sochi Autodrom during practice and qualifying.  First, the track was quite difficult to pass on, and second, it was ridiculously easy on tires.  That meant most cars would be making one pit stop, taking any strategy relating to the pits out of the game. It also meant that Mercedes Nico Rosberg would be desperate to lead his teammate Lewis Hamilton after the first real turn, Turn 2.  When the race began, Rosberg pushed his teammate hard as they ran down the front "straight," and it looked like he might be able to pull off an amazingly important pass.  Then he waited just a little too long and braked a lot too hard, front tires smoking like a Grateful Dead concert without the twenty-minute guitar solo.  He wound up going off-track, rejoining in the lead, but having to give the position up because of the track limit violation.  Almost as soon as his team told him to surrender the lead to Hamilton, Rosberg reported that he had to pit due to massive vibrations.  Entirely unsurprising, considering that he had squared off his front tires.  This he duly did at the end of the first lap, falling all the way down to 20th, ahead of only Felipe Massa, who pitted a few moments later.  As Rosberg waded back into the fray, he asked the pitlane what the tire strategy was going to be.  The reply couldn't have been what he wanted to hear: "We think you need to go the rest of the race on this set, Nico."  Fifty-two laps on a single set of medium tires.

*MEANWHILE:  Up at the front of the pack, Hamilton was dominating the rest of the field with the heartless precision of a scientist pouring molten aluminum into anthills.  Farther and farther ahead he pulled, until he was able to make his only pitstop and not lose first place.  And that's the way things ended up, with Hamilton leading the rest of the field home unchallenged save for the first lap.

*BUT...:  That's not to say that behind him, amazing things weren't occurring.  Rosberg, admittedly in the best car on track, began to haul himself up the field, making the mediums work without visibly stressing them in any way.  At one point, McLaren driver Jenson Button was told that Rosberg was apparently going to go the whole way on one set of tires, and the disbelief in his voice was apparent.  As the pit stops came and went, he jumped farther and farther up the grid, ending up in third behind the Williams Valtteri Bottas as he tried to get his new tires warmed up.  It took a couple of laps for the Merc to dispose of the upstart, but it happened soon enough, putting an exclamation mark on the day's proceedings, if he could keep his tires fresh.

*THE END:  When the entirety of the day's excitement is wondering if someone's tires were going to last 53 laps, you know the race wasn't great.  It wasn't.  Rosberg pulled off the "impossible" task, ending up 15 seconds behind in second with tires that looked liked they could go another ten laps easy.  Bottas was five seconds adrift in third.  Hamilton was handed the winner's trophy by Vladimir Putin, and the day's events came to an end.

*DRIVER OF THE RACE:  Nico Rosberg.  Yes, the problem was one of his own making, but the recovery drive he performed today was pretty darn impressive.  20th to 2nd, making one sent of tires go 52 laps in the process?  Yup, that works. 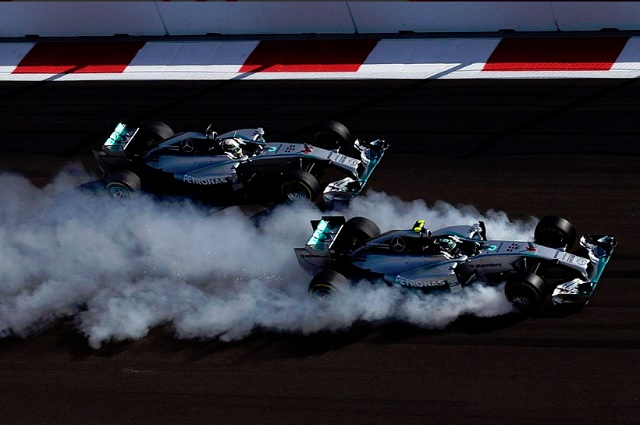 That was the race, right there.

"It was like a chilled-out Sunday drive." - Kevin Magnussen (note: real quote.  This is not a good way to describe a race)

The Blundering Herd moves on to Austin in two weeks!  Halloween weekend in Texas, y'all!  See ya then!

1 That photo is really amazing. That sure is a lot of smoke; he must have locked the wheels with his brakes. Hardly any wonder the tires were ruined.

2 I"m just glad that Circuit of the Americas is down in Austin.  Race weekend here in Fort Worth is nuts at Texas Motor Speedway.  As much as I'd like to be at the F1 events, I wouldn't want the included traffic. (Thanks for all the writeups btw.  You've brought my attention back to a form of racing that I didn't know I was missing.)

3 That's one heck of a photo, indeed.

4 Here's what the flatspot looked like.  Rosberg's teeth are probably still clacking together.

5 I can imagine that would make for a rough ride.

6 Looking at it again, it's worn down enough so that if he'd kept driving on it, I think it would have blown out on him.

His flat-spotted tire never failed, like the announcers were saying.  Instead, the vibration from the flat-spot actually broke the front right suspension.