F1 Update: Spain 2015 A beautiful sunny day rose over Barcalounger as the F1 Circus began its swing across Europe today.  For the first time in 2015, someone other than Lewis Hamilton led the Blundering Herd to the grid as teammate Nico Rosberg had the honors of fast lap during Quals, and he was desperate for a win.  So what happened?  THIS is your F1 Update! for the 2015 Grand Prix of Spain!

Here is the most excitement we had all day: 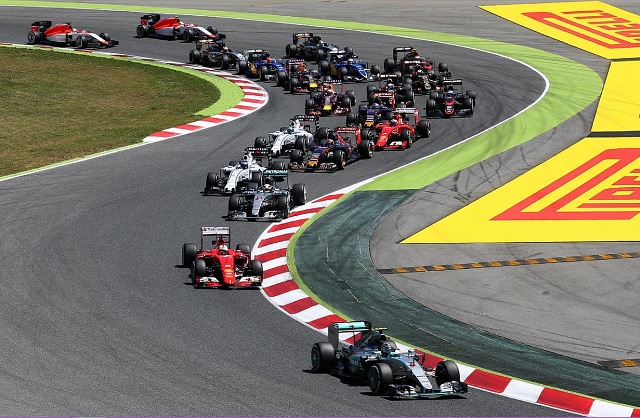 This is Turns 1 and 2 of the first lap.  Nico Rosberg leads the Ferrari of Seb Vettel, who took advantage of a poor start by Lewis Hamilton to move into second place.

From this point in time until the end of the race, the Grand Prix of Spain was one of sheer tedium.  There was almost no passing on track, no real drama despite the best efforts of the Legendary Announce Team to create some late in the race, and the only excitement came when two separate front jack men got run over by their cars (McLaren's HWPMBNSTITF suffered brake failure, and Lotus' Lettuce Grosjean suffered brain failure).

It was a reversion to the bad old days of the early-to-mid 2000s, when all passing was done in the pit lanes, races were processionals, and the winners could often be named before qualifying based on tire manufacturer.  Back then, refueling was the gimmick that allowed for races to hinge on pit strategy.  Now we have DRS which makes it impossible for the car ahead to defend a legit passing attempt, and bodywork that messes up airflow over the car behind, making it impossible for them to get close enough to make a legit passing attempt.

Now, I'm not going to say that every race is going to be a Spanish Grand Prix, and we knew coming in that this wasn't going to be the most interesting race in the world ("I don't always race cars..."), but this was really not good at all.  Nico Rosberg only ever lost the lead during pit stop rotations, and then only briefly.  Hamilton never had a challenge for him and, as previously mentioned, could not do anything about Ferrari's Seb Vettel on track.  A quick change of plan to a three-stop strategy allowed him to race hard enough to pass him in the pits for second.  Fourth was Valterri Bottas in his Williams, another near-podium yet invisible race for the Martini-striped car.  The Ferrari of Kimi Raikkonen overcame his qualifying woes to pull himself up to a complaint-filled fifth.  The other Williams, driven by Felipe Massa ended up in sixth, with just as equally invisible a drive as his teammate's.

Nobody else was on the same lap.

So from a nearly-literal snoozefest in Spain, we head next to the Principality of Monaco and the streets of Monte Carlo.  When one thinks of Monaco, the first thing that leaps to mind is not passing.  However, it's such a visceral experience that one barely notices as the cars race down narrow city streets past fans wearing clothes that cost more than the F1 cars going by, or lounging on yachts in the harbor, or sunbathing next to swimming pools on the roofs of gigamillion-dollar hotels.  With everything else going on to excite the senses, the Monaco Grand Prix can get away with it.  Not so with Spain, a bare circuit with little visual stimulation.

Monaco is the one place on the calendar where raw grunt is not needed.  Perhaps there we will see another dent in the Mercedes domination.  See you in two weeks!

1 Because when I think fast and expensive and exotic cars, I think "utter, mind-numbing tedium."

But it sure seems to be going that way, doesn't it?

2 Really, I'm beginning to wonder why I bother.  Which is sad, because I used to love F1, used to anticipate the race weekends... and now they're just... something I have to do.

3 From a point-of-view of cynicism and ignorance,  I would think the combination of Mercedes dominance and boring races would lead to rule changes for next year.

They've been making rule changes for the last few years, mostly of the form of banning almost any interesting engineering innovation. The result has been a monotous uniformity among all the cars, leadng to boring races.

5 But... the monotonous uniformity in spec series somehow creates excited races. Where did they go wrong?

Letting Tilke design most of the race tracks has left a legacy of failure and boredom.

Also, crippling the tracks that already existed by putting zigzag slower-downers ("chicanes"?) on the long straights to slow down the cars. Check out Monza, for instance. They put three of those suckers in the course and ruined it. Suzuka is an awesome track, but it would be better if it didn't have two of those things.

F1 is about speed -- but not too much speed, you know? Any time things get too fast, they change the courses to slow everyone down and change the rules to reduce engine power again. (And then ban in-race refueling so that they are limited by the amount of fuel they can carry from the start.)

They need to figure out what they're selling and stop crippling it.

(I don't know if Wonderduck will agree with this rant. Don't blame him for it.)

And then stop crippling the tracks. Get rid of all those damned chicanes! If the drivers can spend most of the race flooring it, let 'em!

Pete, to specifically answer your point, most of the spec 1 series don't have the kind of stifling rules that F1 has. The cars/boats are all the same but it's a good sameness, not a dull sameness. The problem with F1 isn't that the cars are nearly all the same, as such, the problem is that what they are force to be by the rules amounts to being crippled.

If F1 let a thousand flowers bloom, what they fear is that one team will end up hugely better than anyone else and run away with the championship. But that happens anyway, like with Mercedes this year. (And last year.)

You can't use rules to make races exciting.

8 Honestly, I think a big part of the problem is tire degradation combined with extremely high amounts of information in the hands of the teams.

The degradation specifically hurts teams that try to challenge for places. NO car on the track is running full-out, save in qualifying, or one last lap on tires you're about to swap out because who cares about the degradation once you're off the tires?

This year, the tires are made of candy-floss and spun glass. The teams simply don't want to run anywhere in the vicinity of another car, and they don't want to run their cars as fast as the car can go, because doing either means your tires run out and you lose to the guy who's running his optimum race up front. The guys in back can't force the guys up front to their full pace. Sure, DRS lets you get around someone who's tremendously slower, but if you can't run close enough to a fast car in order to activate it without burning five laps off your tires, then it ain't gonna matter much at the front of the pack.

And it's certainly possible to use rules to make a race exciting - just check out a restrictor-plate NASCAR race, where every car is running with a crippled radiator. (And quite wisely, they don't do that every race, just on a few...) But the rules F1 has implemented aren't working for that.

9 They need to figure out what they're selling and stop crippling it.

I don't disagree with Steven's basic point here, but we've seen what happens when the gates to the castle are thrown open wide and the barbarians are told "go right ahead."

There used to be a racing series called the Canadian-American Challenge Cup... or Can-Am.  It raced under Group 7 restrictions, which basically came down to "no weapons."  Everything else was fair game.  It lasted for eight years, 1966-1974, during which time innovations such as the use of titanium and carbon fiber, aerodynamic wings, active downforce generation (i.e., fan cars!), 1500hp engine, and on and on and on.  The cars were ridiculously fun.  I mean, dear god, look at this beast!  I get a fizzy feeling behind my... um... y'know... just from looking at it.

The series died due to ridiculous cost escalations driving all but the deepest pockets away, and seasons-long domination by one marque or another (Lola to begin with, McLaren, Porsche, then finally UOP/Shadow).  Sound at all familiar?

Then there is the other thing that happens when you go unlimited: driver deaths.  I've never seen a driver die on track live, though that's only been by dint of good luck... I missed Dan Wheldon's wreck by only a few minutes, and Allen Simonsen by a couple of hours.  I've thought I've seen drivers die, Mark Webber at Valencia in 2010, Robert Kubica at Montreal in 2007 amongst them.

If we go unlimited, drivers will begin to die again, and nobody wants those days to come back.

10 Seemed like there were quite a few empty seats masquerading as fans too. Lately I have been hoping for rain for both qualifying and the race. Intermittent heavy rain is what I really want.

11 Unlimited design, with a construction budget limit â€” exceed it, and pay a penalty fee to the other qualifying teams?