F1 Update: Hungary 2015 A beautiful summer day greeted the assembled masses at the circuit located just outside of Budapest.  A breeze was blowing, the sun was shining, the sky a brilliant blue.  Yet down on the starting grid, a completely different feel was being experienced by the men and women that make up the F1 Circus.  THIS is your F1 Update! for the 2015 Grand Prix of Hungary!

*JULES:  In the 11 seasons we've been covering Formula 1 for The Pond, the F1U! crew has seen members of the F1 Community participate in two moments of silence.  The first was in 2005, a tribute to the recently-passed Prince Rainier III, the long-time benefactor of the Monaco Grand Prix.  The second was a few months later at Silverstone, just three days after the 7/7 bombings in London.  In the first, the drivers were respectful and well-behaved.  In the second, the drivers were... to be charitable, boorish.  Jenson Button was smiling and laughing, and most of the rest of the F1 bunch were clearly not feelin' it. 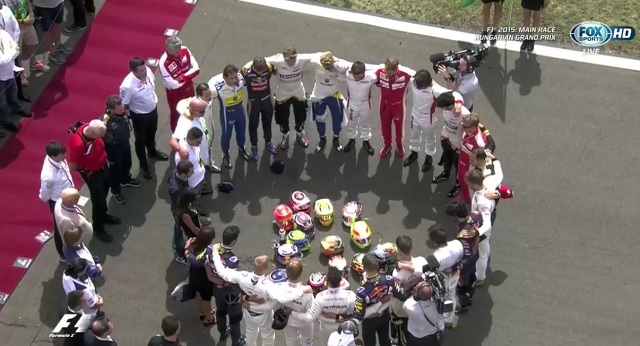 But this time was different.  This time it was for one of their own.  Jules Bianchi passed away last weekend, nine months after his terrible crash in Japan last year.  Today, the drivers and teams said goodbye.  The drivers placed their helmets on the ground and formed an incomplete circle... a gap which was filled by Bianchi's parents and family, who placed their son's helmet in the center of the amassed helmets.  The team principles stood just outside the circle, while the rest of the team members stopped their labors on the grid as well.  Understated, yet very very effective.  And then it was past, the drivers decamped for their cars, and we'd like to think that Bianchi's helmet was the last one left.

*START:  Right from the beginning we had signs that this was not going to be the usual race at Hungary.  We don't often have blown starts, for example, but when Williams' Felipe Not Nasr Massa was unable to place his car in his starting box, the amber and green lights started flashing and the field perambulated around the circuit once again.  Massa was given a penalty, the Blundering Herd took its places on the grid once more, and when the red lights finally went out, chaos reigned.  Red Bull's Daniel Ricciardo had a miserable start from fourth on the grid, then made contact with the Williams of Valterri Bottas and wound up somewhere near the Carpathians.  His self-removal from the front pack allowed the Ferraris of Seb Vettel and Kimi Raikkonen to just swarm over and around the front-row Mercedes of Lewis Hamilton and Nico Rosberg.  By the end of Turn 2, both Ferraris were ahead of both Mercs, with polesitter Hamilton shockingly in fourth.  It would get worse for the reigning World Champion when he dropped a wheel on to the grass outside the Turn 6/7 chicane and went off into the kittylitter.  Though he was able to extract himself, by the time he returned to the racing surface he was in 10th place.  At the end of the first lap, Vettel led his teammate by over a second, and was nearly four seconds up on third-place Nico Rosberg.

*AND THEN:  Things settled down a bit after that.  By Lap 25, Vettel had six seconds in hand over Raikkonen, who was 10 seconds ahead of Rosberg.  Ricciardo and Hamilton were both 30-odd seconds behind the leader, both driving well and quickly.  The fact of the matter was, though, that the Ferraris were looking crazy fast today and seemed unlikely to be caught without external forces coming to play.

*EXTERNAL FORCES: Force India had been having a not-so-great weekend.  They had brought their B-spec car to the Hungaroring, and were expecting big things.  They certainly got them.  On Friday, the rear suspension on Sergio Perez's chassis failed, sending him into a bouncing, tumbling wreck that came to a halt upside down.  During Quals, neither car could make it into Q3.  Earlier in the race Perez was mugged by Pastor Maldonado's Lotus, punting him off-track, airborne, and into a spin.  While he could continue, one could not be faulted for thinking "what else could go wrong?"  And then on Lap 42, Nico Hulkenberg's front wing fell off as he headed down the straight into the braking zone for Turn 1.  While it went right under the front tires, it did not tarry long, emerging from behind the Force India in a shower of carbon fiber shreds.  Hulkenberg speared directly into the tire barrier outside the run-off zone for the first turn, though with much speed scrubbed off... thankfully, the front wing did not keep the brakes from working for long.  Hulkenberg emerged unscathed, though shaken somewhat.  First a virtual safety car was called out while recovery efforts began, then the slumbering Berndt Maylander was awoken and sent out in the real safety car as cleanup of the huge amount of carbon fiber took place.  Indeed, the field was led through the pit lane as the front straight may as well have been covered in razor blades and caltrops.  But the arrival of the safety car meant that Vettel's lead, now up to 25 seconds over third-place Rosberg, was now gone.  However, with Raikkonen between Vettel and Rosberg, it didn't seem like there'd be much chance for a threat, even with a reborn Lewis Hamilton in fourth.

*MORE EXTERNAL FORCES:  Then the radio call came in from the Finnish Ferrari driver... there was a weird sound in the cockpit and he was down on power.  All too soon the reply came back: his MGU-K unit, previously known as KERS, had packed up and gone home.  This would leave the second-place Ferrari down about 150hp.  The stage was now set for an interesting run to the finish.

*NO MORE SAFETY CAR:  Raikkonen's job was now to hold up the silver cars as long as he could.  This wound up being about five seconds in the case of Rosberg, who blew the metaphorical doors off the Ferrari nearly as soon as the race restarted.  Behind them, however, chaos reigned again.  Ricciardo forced his way past Hamilton with the two making contact.  The Red Bull lost some bodywork, the Merc had a front wing so badly damaged that it needed to be replaced, and quickly.  Hamilton would also be given a penalty for sloppy driving for this.  In the meantime, the other Red Bull, driven by Kid Kvyat, also got past Hamilton, while Valterri Bottas took a Toro Rosso wing to the rear tire, leaving him with a slow puncture that got worse just as he tried passing the stricken Hamilton.  While there was no harm done as a result, it got dicey for a moment or two.

*TO THE END:  On Lap 51, both Ricciardo and Kvyat passed Raikkonen, who would retire his car shortly thereafter.  The two Red Bulls then set off after Rosberg, who had a windscreen full of Ferrari ahead of him.  Ricciardo's attempt to pass the Merc cleanly almost worked.  In what the stewards termed a "racing incident", the Red Bull gave Rosberg a flat tire at the cost of a nose.  In one of the stupider things we've ever heard, Rosberg after the race said that he had expected Ricciardo to give him space, despite the two of them fighting for position.  It doesn't work like that, Nico.  Both drivers had to pit for replacements of their damaged parts, and Kvyat moved into second place with five laps to go.  After his nose change, Ricciardo managed to haul himself up to third, while Rosberg had somehow contrived to fall back behind his teammate and rival.

*THE END:  When Seb Vettel finally made it across the finish line, he led Kvyat by five seconds (increased to 15 with the addition of a 10sec penalty), and Ricciardo by 25.  Fourth place was taken by the 17-year-old Toro Rosso driver, Embryo Verstappen.  And in a miracle comparable only to those of Saint Alexander Hergensheimer the Dishwasher, the newly renamed Fernando Alonso brought his McLaren home in fifth place.  Hamilton, Lettuce Grosjean, Rosberg, Jenson Button, and Sony Ericsson rounded out the top 10.

"This hasn't been an easy weekend for anybody in Formula 1... the minute's silence for Jules was very emotional, and it was very tough to get in the cockpit straight afterwards.  But, today, we respected Jules and we respected the sport." - Fernando Alonso (note: real quote) 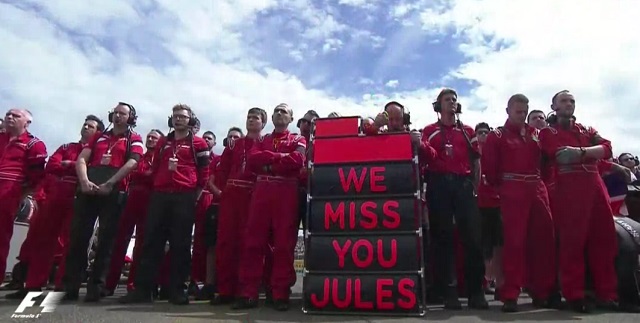 And now the F1 Horde goes on its mandatory Summer Break.  The next race will be August 23rd, in a little town in the Ardennes Forest.  We'll see you in one month at Spa-Francopants!

2 The Unstoppable Team kept entirely off the podium? Did I read that right? What a mess of a race, it looks like.

3 RB, watch it.  It's worth the time.  GD, it was like someone dropped a grenade in a trench.  The scrambling was awesome!

4 Most enjoyable F1 race since Bahrain last year, I think.