F1 Update!: Monaco 2012 An absolutely perfect day in the Principality of Monaco greeted the F1 Circus as they pulled their steeds onto the starting grid.  Would we see our sixth winner in six races today?  Or would there be our first repeater?  And would those clouds hovering off the Cote d'Azur make their way over the circuit?  THIS is your F1Update! for the 2012 Grand Prix of Monaco!

*GOOD LUCK... YOU'LL NEED IT!:  When the lights went out to start the race, polesitter Mark Webber got a clean start with the man who shared the front row with him, Nico Rosberg, shuffling in directly behind.  It stayed that way as the rumbling horde charged down towards Sainte Devote. We've gotten pretty lucky over the past few years, in that there hasn't been one of those legendary first-turn disasters that take out a quarter of the field.  However, in the few seconds it took to send the 24-car field towards the first turn, the educated fan got an inkling that something was about to happen; we don't usually go four cars wide, after all.

*TOTAL CARNAGE: Slappy Schumacher was probably in a bad mood.  He had been the fastest qualifier for the race, but was punted down to sixth due to a penalty earned at the Grand Prix of Spain.  He is also something of a Monaco specialist, having won here five times.  When the lights went out, he had a great start and went to the left of the Lotus of Lettuce Grosjean.  Over on the other side of Grosjean, the Ferrari of Felipe Massa drifted towards the right side of the Lotus, trying to slip onto the racing line for Sainte Devote.  Lettuce, knowing that while one can't win the Grand Prix of Monaco on the first lap, you sure as heck can lose it, moved to the left, towards Slappy.  It didn't go well. 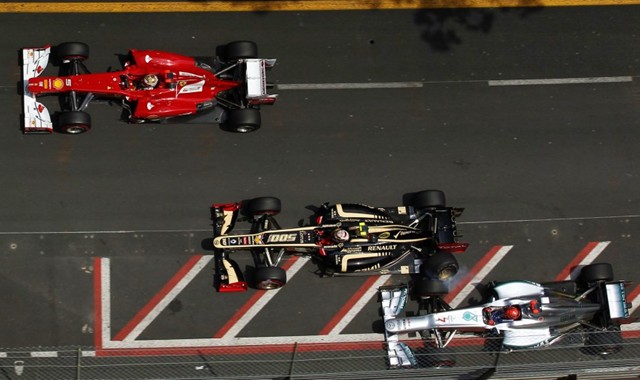 Grosjean, his rear suspension gone, staggered to the right, stretching across the circuit at the narrowest point on the front straightaway.  Slappy got away clean, though he would retire with a fuel problem 65 laps later.  With Lettuce blocking the circuit and the thundering herd bearing down on him, something bad was sure to occur. 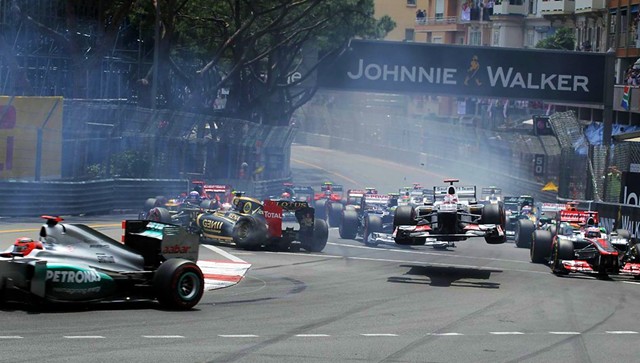 Half the field dove inside the curbing to avoid the spinning Lotus.  The other half squeezed as far outside as possible.  And then, there was Gandalf Kobayashi.  Trapped in a place where he could do neither, he wound up going over the rear tire of Lettuce.  While his Sauber seemed to survive the landing, he wound up pitting twice by Lap 6 and retiring the car.

*SAFETY CAR:  Amongst the many things that makes Monaco unique on the F1 calendar, one of the less-obvious is the incredible skill of the track workers.  Made up out of the elite of the pool of European race track workers, they can make a wreck disappear nearly before the carbon fiber shards stop moving.  As the HRTs swept past the broken Lotus, the track workers swarmed over the car... and discovered they had a problem.  The nearest crane had been pre-positioned a little farther down the track and would take a minute or two to get to them.  To exacerbate the problem, the Lotus was stuck in gear, and no amount of pushing of the "emergency neutral" button would allow them to shove the car around.  As the track workers ganged up on the ruined car and began to shove it off the racing line by brute force, the thundering herd rocketed around the shortest track on the F1 calendar.  Almost before anybody realized what was happening, the first lap was over and the Red Bull of Mark Webber, followed by the Mercedes of Nico Rosberg, was barreling down towards Sainte Devote... and there were track workers just inside the curb.  A Safety Car had to be called out, and a near-disaster was only averted by the thinnest of margins.

*DEEP BREATH:  Once the Safety Car went away and everything started over again, the race settled down.  Oh, there was some drama early as rain was expected, but never materialized.  When everybody made their first pitstops by around Lap 25 or thereabouts, the lead devolved to Seb Vettel, who didn't stop on the hard tires, and kept increasing his lead.  At the end of the first stops, he had a 12 second lead.  It got all the way up to 17 seconds as Lap 40 approached... and the "pit delta," or the time it took to enter the pits, get serviced, and leave the pits, was 20 seconds.  And then Red Bull's strategy became clear as rainclouds began to move back over the circuit.  But would any rain actually fall, and would it fall before Vettel burned the tires off his car?  If it did and everybody needed to pit for Inters, he would win the race.  If it didn't, he'd drop back into the pack, but Mark Webber, sitting in second, would win.  Eventually, the tires could take no more and Vettel was forced to pit on Lap 46.

*IN THE END:  It never did rain.  While things got tighter and tighter as the tires on the cars wore at different rates, Webber stayed in front ahead of Rosberg, HWMNBN and Vettel... though it did look impressively close at the end. 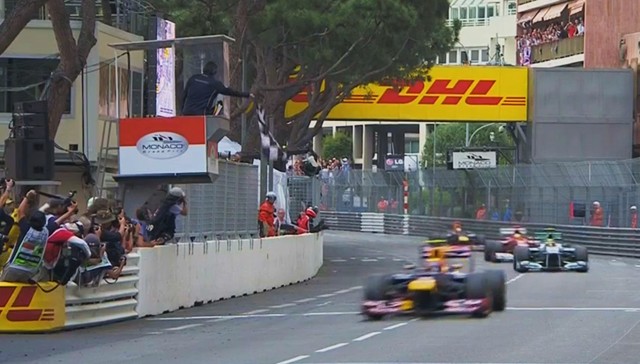 The Aussie became our sixth winner in six races.

*DRIVER OF THE RACE:  Mark Webber.  He did everything right today, up to and including perhaps slowing the field down a touch so Vettel could extend his lead in case it rained.  Fortunately for him, it didn't rain, he won the race fair and square, and did so impressively.  Good job!

*TEAM OF THE RACE:  Red Bull.  This one was theirs no matter how the weather played out, it was just a question of which driver would get the winner's trophy.  Brilliant strategy, and with a little bit of luck (a problem on a pit stop by Ferrari or Mercedes), they could have had both drivers on the (non-existent) Monaco podium.

*MOVE OF THE RACE:  On Lap 35, we had a tidy little race going between the Sauber of Sergio Perez, the Lotus of Kimi Raikkonen, and the Force India of Nico Hulkenberg.  All three were tucked behind the car in front, looking for any opportunity to try a pass on the tight streets of Monaco.  As the three went into the desperately slow Rascasse, Kimi got his nose under Perez. 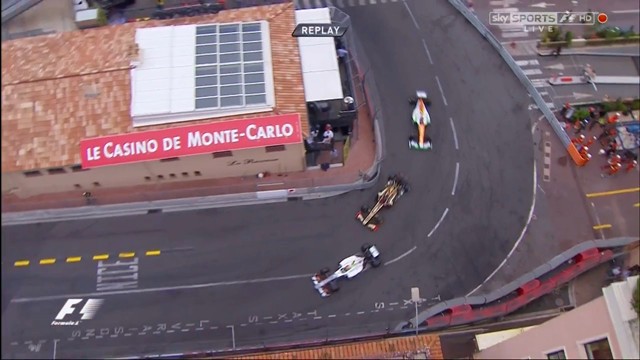 It wasn't so much that he was trying a pass, as he was maybe angling for a slight advantage somewhere down the line.  Except there was a little problem... 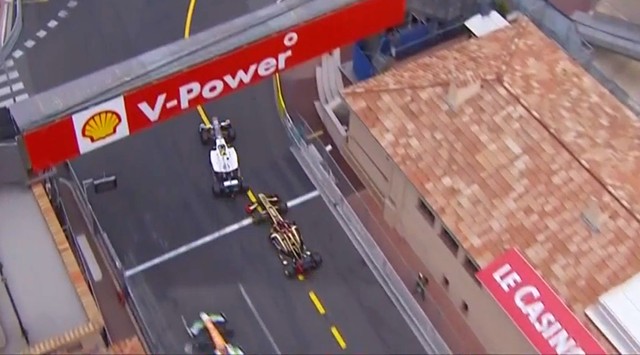 ...in that the Sauber was actually heading for the pit lane.  Instead of accelerating out of Rascasse like most drivers would, he just sort of ambled towards the entry.  This forced Raikkonen to jump on the brakes and scramble to the outside to avoid the Sauber that had suddenly come to a virtual halt in front of him. 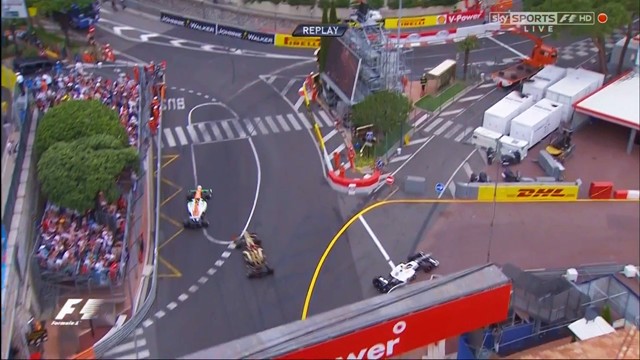 As the Sauber slid into the pit lane and the Lotus floundered around, Nico Hulkenberg undoubtedly could not believe his good fortune.  He just drove around the outside of the World Driver's Champion, opportunistically picking up two places at once.  It wasn't a masterpiece of technical driving, to be sure, but it was my favorite move of the race... even if the Sauber later got a penalty for "late entry" into the pit lane.

*MOOOOOO-OOOOVE OF THE RACE:  When your car isn't performing the way it really should be, a driver may be tempted to feel frustration and annoyance.  When the driver is a former World Driving Champion and is a member of the McLaren F1 team running in the most important race on the calendar, they have good reason to feel that way.  When Jenson Button found himself racing with the Caterham of Heikki Kovaleinninninnie for 13th place, having been stuck behind him for a dozen laps or more, his frustration was palpable.  And then he tried to pass him in the Chicane... 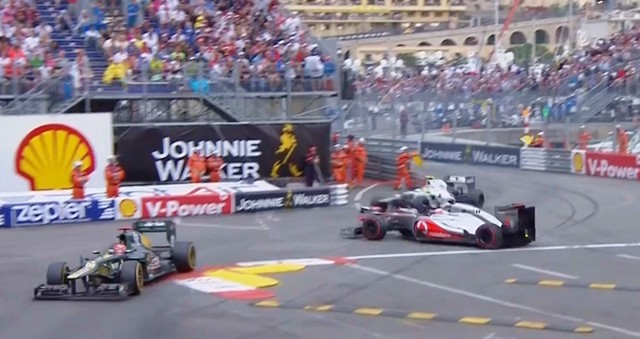 ...which was a dumb thing to try, particularly when you screw it up so badly that you wind up 1) spinning and 2) being unable to continue with seven laps to go.  Good jorb, Jenson!  Here's your Moooooo!
*SELECTED DRIVER QUOTES OF THE RACE:

"It's great to finish on the podium at my home race." - Nico Rosberg (note: his father is Finnish, he was born and races under the German flag, but he has a home in Monaco.  Hm.)

"I didn't win, but I'm leading the Driver's Championship." - HWMNBN

"The team had a good plan today.  The rain just wasn't there.  So we're going to fire Mother Nature." - Seb Vettel

"I need to find out why the team kept hitting me on the head with stuff from the sign board." - Lewis Hamilton (note: allegedly, whenever the team held out the pit board, stuff 'fell off it' and hit him.  Uh-huh.)

"Now we go to Montreal, which is a similar track to this one." - Felipe Massa (note: real quote.  Wha?)

"I'll have to give Sergio a couple of bucks for that one!" - Nico Hulkenberg

"The first points scored by a Senna at Monaco since my uncle Ayrton won here.  Not that there's been a lot of Senna family members racing here since then." - Bruno Senna

"I'm fairly sure I don't like this track." - Sergio Perez

"The call to put me on Inters with six laps to go, even though it wasn't raining, could have been the greatest move ever.  That it didn't pay off doesn't matter, it's not like we were going to score points." - Jules Vergne

"Suck it, Button.  I was racing for position, I didn't have to pull over for you or nothin'." - Heikki Kovaleinninninnie

"I was in 10th place for most of the race.  How deflating would it have been for everybody else if a Marussia could have scored points before Caterham?" - Tim O'Glockenspiel

"HRT isn't exactly the greatest ever, but we beat a McLaren in Monaco this year." - Narain Kittylitter

"You have questionable taste in music." - Slappy Schumacher

"Everything that could have gone wrong with my car did at the same time.  Eep." - The Red Menace 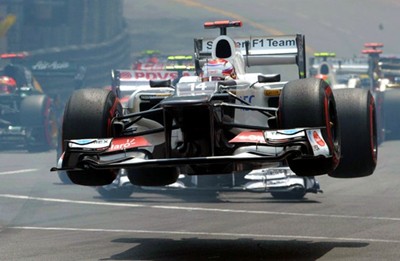 So that's it from The Principality.  In two weeks, the European Leg of the calendar continues with the Grand Prix of... Canada?  Ohhhhh-kay.  See you then!

1 Six winners in the first six races is awesome. A season to dream about!

2 didn't realise you were quite the f1 fan. i thought it was hilarious they kept on showing and talking about button, bbc bias!!

flying kob is the best picture ive seen from f1 in a while.

and the goddam rain. seriously. do they have one guy staring up at the clouds or something. "yup, its gonna rain annnnny second"

3 New around here, eh, Carnett?  The F1Update! is why this blog started in the first place, nearly seven years ago.  There have been 859 F1-related posts here at The Pond, out of 2141 total.  God only knows how many words and pictures... or hours spent... have been involved.