F1 Update!: Canada 2012 A nigh-on perfect day for racing awaited the drivers of the F1 Circus as they waited for the lights to go out.  Would it be a perfect day for pole-sitting Seb Vettel, who has never won in Montreal?  Or would one of his title rivals, Ferrari's HWMNBN or McLaren's Canada specialist Lewis Hamilton, jump up over the young German?  THIS is your F1 Update! for the 2012 Grand Prix of Canada!

*RED-HOT CONFUSION ACTION:  Some races are defined by speed, guts, risk-taking and dramatic passes, a mere knifes-edge from disaster.  Other races are decided by cold, calculated numbers, saying if a car does this and that, it'll end up here... the type of race that turns on a pitstop taking an extra tenth of a second to complete.  Then you've got the 2012 GP of Canada, where what worked for one team didn't work for another, and even within a team, what worked for one car didn't work for the other.  In other words, what should have been relatively straightforward turned out to be a total crapshoot.
*TIRES RULE THE ROOST:  The race began with Seb Vettel's patented "run-away-and-hide" start, which got him out of DRS striking range, but not much farther than that.  As the first round of pitstops occurred from Lap 17 on, HWMNBN took the lead on a fast stop, but on cold tires was quickly passed by Hamilton.  Remember what we mentioned in the previous paragraph?  The "total crapshoot" part?  Here is where it applies.  As Hamilton came in for his second pitstop (another of the now-common McLaren FAILstops, I might add), neither Vettel or HWMNBN batted an eye; they were clearly going for a one-stop strategy.  So were the two Lotuses (Lotii?) of Mumbles Raikkonen and Lettuce Grosjean.  As the race went on, Raikkonen faded away as Grosjean got stronger and stronger.  Meanwhile up front, Hamilton, some 15 seconds back due to his stop but on much fresher tires, began to take a second per lap off the Red Bull and the Ferrari.

*SO THEN WHAT?:  About what you would expect.  Both Ferrari and Red Bull, seeing the difference a change of tires made for Hamilton, brought their drivers in for a new set of tires as well, creating a tight race for the finish between three world champions.  Except that's not what happened.  Vettel and HWMNBN stayed out on their worn and fraying tires, just begging to be picked off by the McLaren, which is exactly what happened.  Vettel didn't even try to defend his position, and the Ferrari driver put up only the most token of defenses as Hamilton aimed for first place.  At which point, Vettel made the tire equivalent of a "splash-and-dash" pit stop (a "tread-and-go"?), which allowed him to eventually catch HWMNBN... for fourth.

*WAIT, WHAT?:  Where the one-stop strategy didn't work for Vettel and HWMNBN, it worked like a charm for Lettuce Grosjean and Sauber's Sergio Perez.  Both drivers came steaming up from behind the two world champs and made them look slow... which at that point, they were.  HWMNBN ended up in 5th place, having lead only 10 laps before, with Mercedes' Nico Rosberg a half-second behind and closing hard.  All in all, a fitting end to a head-scratcher of a race.  A race where what should have worked, didn't, except when it did.

*DRIVER OF THE RACE:  Lewis Hamilton became the seventh driver to win in seven races, a F1 record.  In doing so, he drove a nearly flawless race (marred only by his gagging in the first pitstop), never pushing his car or, more importantly, his tires, too hard.  The victory, his third in Canada, also moved him into the lead for the driver's championship.
*TEAM OF THE RACE: Red Bull.  Off the podium but still in the lead for the constructor's championship, their last minute call-in of Vettel for fresh tires allowed them to take a position off of Ferrari.  A logical call, but logic wasn't much in evidence in some parts of the pit wall today.
*MOVE OF THE RACE:  Around about Lap 40, Slappy Schumacher was clearly annoyed at being stuck behind the man who had become something of a nemesis, Gandalf Kobayashi.  So, heading into the Hairpin, he decided to do something about it. 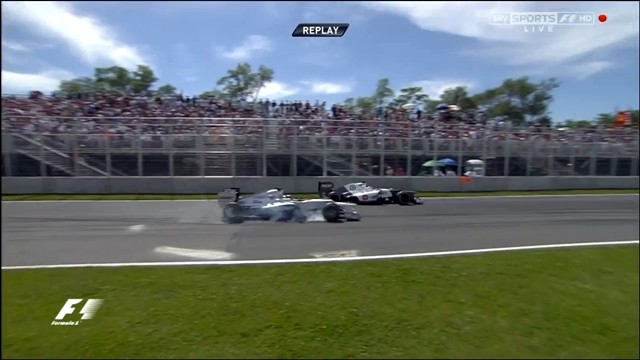 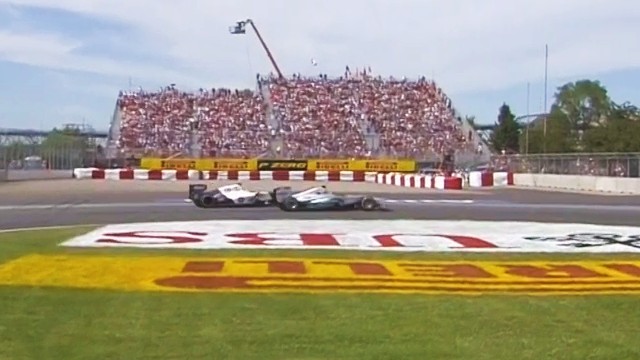 Except he didn't.  Fail to make the turn, that is.  Somehow, he found enough traction on his tortured tires to yoink the car through the opening stages of Epingle, a suprised Gandalf falling behind in his wake. 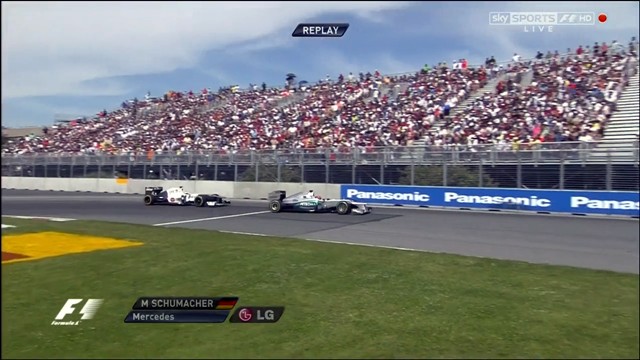 On the way out, the Mercedes again found traction on ruined rubber and powered his way onto the back straight, a marvelous example of car control at a time when that shouldn't have been possible left behind him.  That Kobayashi repassed him in the DRS zone a few seconds later doesn't matter: Slappy either got really lucky, or he's still really good.  Either way, he wins the Move of the Race.
*MOOOOOO-OOOOVE OF THE RACE:  It looked like Ferarri's Felipe Massa had come back from his terrible start to the season.  First, a good finish at Monaco.  Then a good qualifying performance in Montreal.  Now a great start had moved the Brazilian into 5th place with an eye cocked towards Mark Webber's 4th place.  Then on Lap 6, with no external prompting whatsoever, it all went pear-shaped. 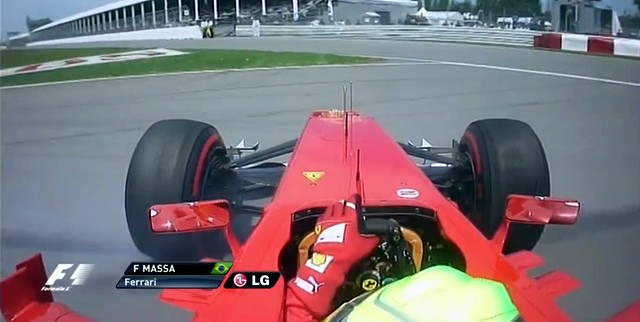 The spin flat-spotted his tires, dropped him to 12th, and we never heard from Massa again.  Good jorb, here's your Moo!


"I am amused by the simplicity of this course!  Bring me your finest smoked meat and poutine!" - Lewis Hamilton

"Montreal is not so far from my home country." - Sergio Perez (note: real quote)

"It wasn't the wrong decision to do a one-stop strategy, but it wasn't right, either.  So we wussed out." - Seb Vettel

"It was wrong.  Grosjean was three seconds a lap faster than me at one point." - HWMNBN

"Remember back when I won that race?  Wasn't that great?" - Nico Rosberg

"I was two-stopping the entire way.  Maybe that was the wrong call." - Mark Webber

"I did 46 laps on the soft tires.  That deserves a better result than ninth." - Gandalf Kobayashi

"My teammate wins, I finish 16th.  Does that seem right to you?" - Jenson Button

In two weeks, we find ourselves in the racing mecca of Valencia, Spain, for the Grand Prix of Europe!  See you then!

1 I'd been wondering if I should volunteer to guest blog this one, but figured by the time I could get around to it, you might be at it, too.  I was correct, I finished watching the replay just in time to sit down and see the F1U appear.
Thanks for the effort.  A good F1U for an amazing race!  Seven winners for seven races is quite the record, but unless something really odd happens, it's not likely to go further than that.

2 I love it! 7 different winners in the first seven races!  Obviously this won't keep up, and we'll probably get a repeat next time, but I can still hope.

So... what the hell is actually going on? Is figuring out the characteristics of the Pirelli tire rocket science, or alchemy? Is it a moving target, with enough changes between races that you've got to throw out everything you know before the practice, and a cool practice day and a hot race day is all it takes for Ferrari to throw away a race?

I don't expect Massa and Alonso to drive to the same standard. I do expect Button and Hamilton to be in the same neighborhood, leaving aside bad luck in the pits. For one of them to be riding high while the other one can't pass back-rankers is fundamentally weird...

For one of them to be riding high while the other one can't pass back-rankers is fundamentally weird...

...and should have Hamilton quaking in his driving boots.  My guess is that there's some flaw in Button's car that's lurking in Hamilton's as well, but hasn't shown itself yet.  Who know what it might be?

5  McLaren's mechanics had better be trying to find out.

6 For one of them to be riding high while the other one can't pass back-rankers is fundamentally weird...
Incredible that Jenson has had such a rough time of the tires on his McLaren. However, if I remember correctly (and lately, that's been hit-or-miss), one of the previous McLaren drivers (Juan Pablo Montoya, again, if I recall correctly) had a similar issue -- his teammate (Kimi) had no trouble with the tires, while he just had a difficult time getting anything out of the tires. (Everybody, please correct me if I am wrong.) I wonder if it is just an issue of McLaren's mechanics working to make the car better for the team's more successful driver in each particular season. However, I am only speculating here... (especially since Jenson had a win, while Lewis, up until Sunday, did not)
Regardless, this has been an incredible season. As for the trend keeping up, I don't expect it to continue for much longer; but I will predict that we all should expect to see Sergio Perez, Romain Grosjean, and/or Kimi Raikkonen on the top step of the podium before the season closes, if their performances continue along the trend they have set recently.

7 By the way, were there any woodchuck events?

8 We were marmotless this year.