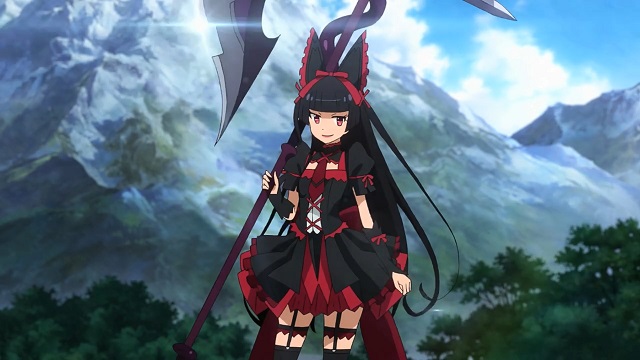 -GATE, Ep03
There's an awful lot to like about last season's GATE... I mean, who doesn't like the idea of fighting dragons with attack helicopters, or taking on an army of orcs with a swath of .50cal machineguns?... but to my mind Rory Mercury, demigod and Oracle of Death, heads the list.

Just don't get on her bad side.  Or be nearby when she gets hungry.

I want a crossover with Rio: Rainbow Gate! now... call it Rio: Rainbow GATE.  Oh, the joy I would feel seeing Rory Mercury let loose on Casino Island, or the JSDF shooting down Sky Resort with a few F-4 Phantoms.  This needs to happen.

2 That would be too awesome for this universe to contain. You'd have to create a parallel universe for the sole purpose of containing the additional awesome.

Ahem... it was a Sugar Glider costume.  We take our RRG! costumes seriously around here.

I mean, not her as a "person" but her as a character. Short of Itami himself, she is given the most depth and range. She's far and away the most dangerous creature in the entire show. (Rory and Shino defending the gate in Italica was an amazing sequence; no competition between the badass warrior women, no friction, just immediately each having the other's back.) She (almost) always knows exactly what's going on, and is honest enough with herself to admit that some of her behavior is because she knows that her hourglass is running out of sand.