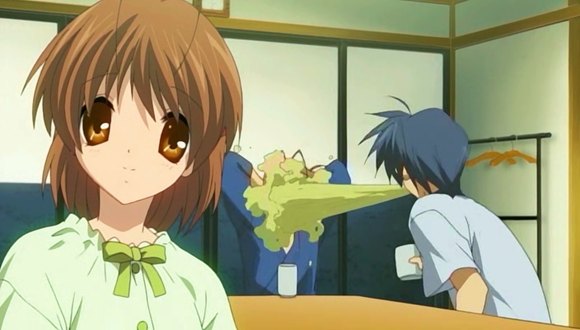 It's not my favorite KeyAni production (that's Kanon '06, of course), but Clannad has a LOT more humor than anything "serious" they've done before, excepting FMP: Fumoffu, a straight-up comedy series. 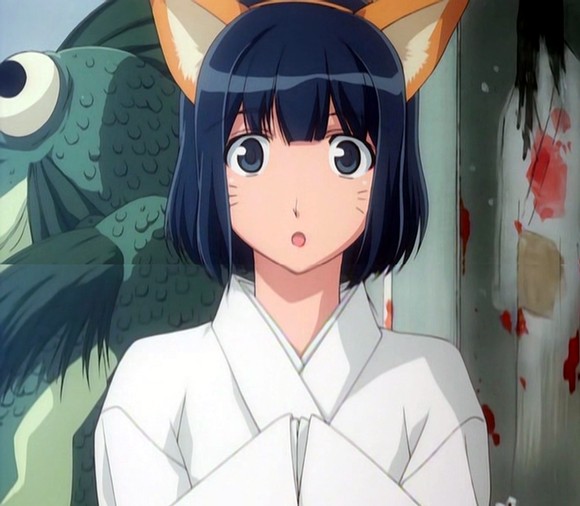 I think JCStaff put this lass into the show just so she could dress up as a kitsune in this episode.

1 That, and the whole "we need a big multi-roomed structure to have plot in, and we don't want to use the school ALL the time" thing, since she's the one with the mansion IIRC...

Right, the hide-and-seek episodes!  Still, I think her most memorable role is as the kitsune and, in episode 23, the vampire/zombie-thing.

It's like JCStaff got tired of doing thing normally for a bit and wanted to have some fun.

3 And the poorer characters couldn't have afforded the working ears. Kawaii! 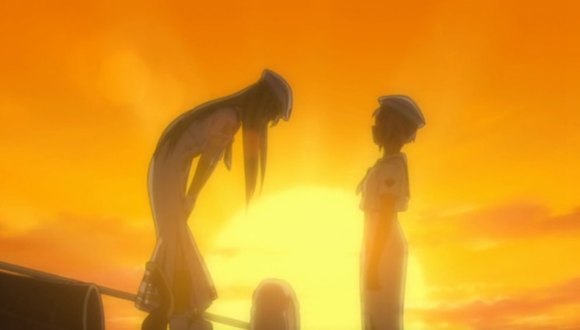 Possibly one of the finest anime episodes I've ever seen.  I went back and watched it again, as I'm feeling a little glum tonight.  The first time I watched it, I had no idea what was coming, so it was as much a surprise to me as it was to Alice.   This time, however, I knew what was about to happen... and I still got a goofy grin on my face.

I find that I really don't want ARIA to end.  After 49 episodes (to date) and one OVA, you'd think that the show would start to feel like it was dragging on, but it has stayed fresh for me.  Even Kanon didn't give me that feeling... when it ended, it was time for it to end.

In fact, only one other series has evoked the "don't be over yet!" feeling from me: Azumanga Daioh, my favorite show of all time.

I believe that, with episode 09, ARIA has joined Azumanga and Kanon as My Favorites.  Nobody is more surprised than me.

1 I wouldn't mind if ARIA became the Everlasting Gobstopper of anime. If shows like Doraemon could do it, why not the continuing adventures of Akari and co?

2 I am sure that you appreciated the duck in the hot spring under the ruined mansion episode (Aria the Animation 10). No strategic steam, but alas, too many large towels.

You could say that I liked that episode, yes.

4 Wow, that's weird.  The link above is supposed to take you to the December 11th, 2007 entry ("The Long-Anticipated Return of Ducks in Anime"), but instead you just get the "Ducks In Anime" category.

5 Clicking on pretty much anything in the Ducks in Anime category (with the exception of the most recent entry) brings up the full category. I'll hazard a guess that it has something to do with the category being created before the switch to Minx.

Do permalinks work in any of your other categories?

6 You know what it is? When you use the category list to find the post you're looking for, Minx (rightly or wrongly, I'm not sure) inserts the category path into the middle of the URL for all the permalinks on that page. That causes Minx to bring up the whole category regardless of the post.

I browsed down the mainpage to the post in question, clicked the permalink, and it worked just fine.

7 Will, you seem to be right.  I checked a few permalinks, and all of 'em in "old" categories (such as Anime and F1 Updates) work fine, but in the newer categories (like F1 Pr0n and 12 Ducks of Xmas) the links go to the category entry.

Of course, I doubled the number of categories a few months ago... *sigh*

8 There's a bug in the category assignment thingy, that causes items to show up in category lists but not show up when you go the the permalink inside a category.  (More specifically, there are two ways to assign categories; both should work, but one doesn't, quite.)

It's fixed in 1.2 (due out mid-April), but I'll also need to run a script to fix the existing errors. 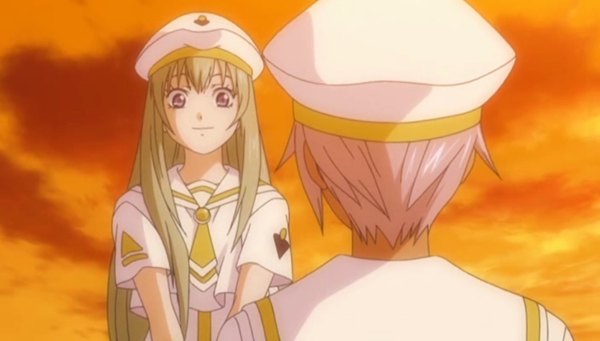 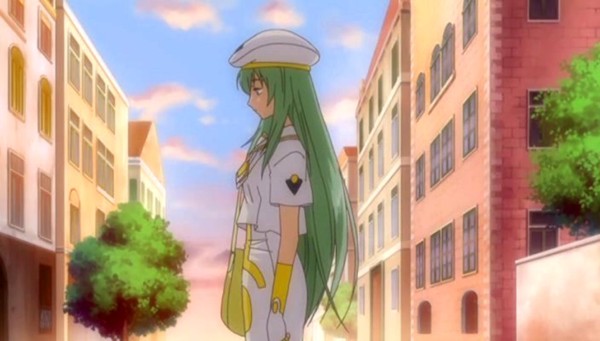 Poor Alice... that was just mean.
-ARIA the Origination, ep08

That'll tide you over until I get the ARIA post I mentioned last week finished.  That darn ick made it impossible to write clearly...

1 Alice has been on the receiving end of a lot these past couple of episodes.  I enjoyed seeing Alice actually happy for once, but then she gets the rug knocked out from under her happy world again (as Athena's feet literally get out from under her).  Hopefully, Alice will find her happy place by the end of the next episode... 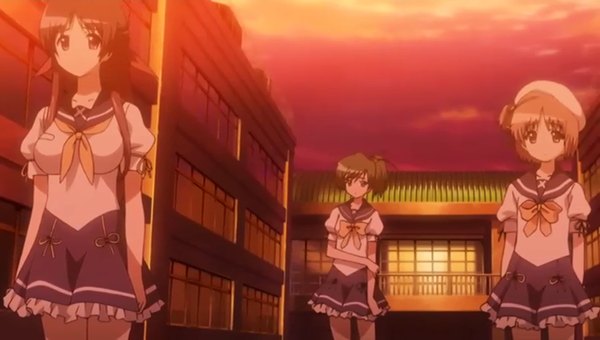 How many fetishes can YOU find in this picture? 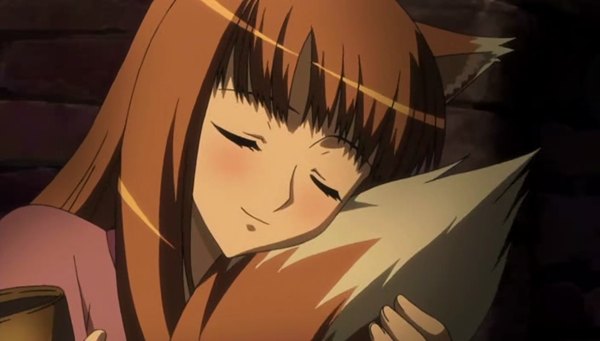 You wouldn't think there'd be any chance that a show like Spice + Wolf would be interesting, but it is.  Unfortunately, it's interesting because of Horo (the abovementioned wolf goddess), not because of the main premise (medieval trading) or storyline.  Horo's feisty, clever, witty, and her ears and tail are cute (as she'll tell you at any time)... and she's practically the only reason to watch the show.  I'm not sure I've ever seen a series that's so dominated by a character.  There's one episode where she's not on screen until the final thirty seconds, and it's really bad.  I mean, REALLY bad: "two guys sitting in a room, talking" bad.

I can't recommend Spice + Wolf, but there are a lot of worse shows out there... and please note that I'm watching it to the bitter end.  Maybe we'll figure out why Horo the wolf goddess looks more like a fox than a wolf...

1 Shorter Spice and Wolf.
No, I didn't make it, I just found it.

errrr, kinda lost me at 'economics'.

This cart they drag around - does it have AirBags?

4 What's all this crazy talk?  W&S is the best show currently running.  I even really like the economic aspects of it.

One problem I do see is that as Horo picks thing up and becomes more clever, she's starting to expose Lawrence as somewhat of a dim bulb.  I thought it would have gone the other way.

The fox thing has been bugging me as well.

5 I suspect the decision has a lot to do with not having an indigenous wolf to base her on. If there are any wolves left in the wild in Japan, they're going to be small like a fox. Her coloring is definitely that of a red fox.

6 The wild wolves in the series look more like real wolves. Either her mother lied to her about her dad, or the animators realized that foxes are a lot cuter than wolves. 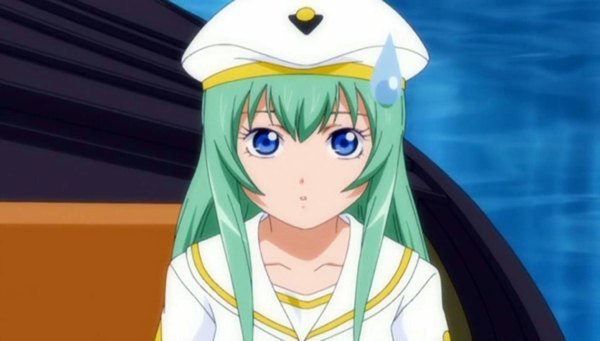 I love this shot...
-ARIA the Origination, ep06

I'm currently working on a post about an aspect of the ARIA world that's bothered me for a while.  It's not a problem with the show at all, but one of those things that's like the socket of a recently-pulled tooth... you can't help but poke at it with your tongue. With any luck, it should be up on Sunday.

1 I'm surprised Alice didn't go through half of Episode Six with that sweat drop permanently fixed to her face.