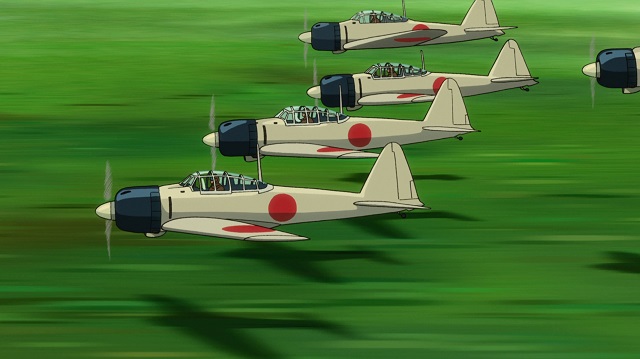 I just finished watching The Wind Rises, Ghibli's fictionalized account of the life of Jiro Horikoshi, designer of both the A5M "Claude" and A6M "Zero" fighters.  I have mixed reactions.  As far as Ghibli films go, it's far and away my favorite of all of them.  Its no coincidence that it's also the least preachy of all of Miyazaki's films: the two go hand-in-hand. 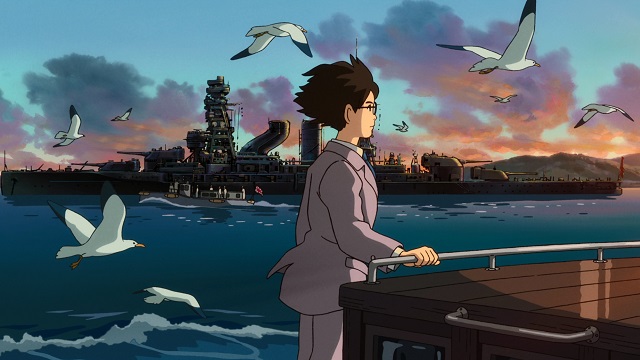 It should come as absolutely no surprise that it's a gorgeous film.  Again, it's a Ghibli.  That's to be expected.  There's just something about The Wind Rises that doesn't sit right with me, and I think it's the main character.  Jiro Horikoshi in this movie comes across as a completely dispassionate, yet heroic, leading man.  Brilliant, relatively athletic, a leader of men, and he does it all with the same nearly blank expression on his face.  Only when he's discussing airplanes does he begin to show some emotion... not much, but some.  His wife is dying of tuberculosis?  Blank look.  Tokyo destroyed by an earthquake?  Blank look.  In Germany?  Blank.  The voice acting of Hideaki Anno, who sounds like he has a stuffed nose, doesn't help a whole lot, either. 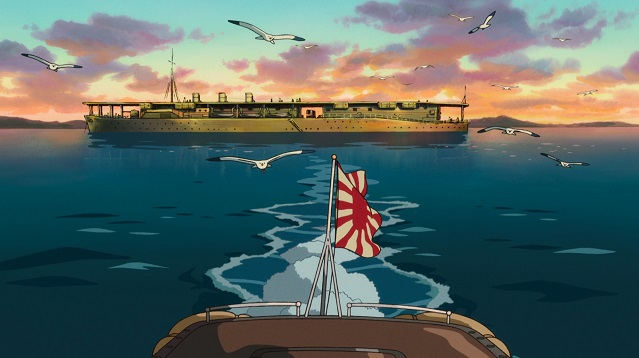 Still, it's got the Hosho in it.  Which is always nice.

All in all, it's certainly worth watching.  I'll give it 3.5 stars.  It just could have been so much more.

1 I recall some famous movie reviewer being really pissed at this movie because it didn't make him out to be some kind of monster.

2 I can believe it.  This review here basically says just that.  I don't agree with everything he says, but there are parts... the dispassionate nature, for example.

I can't rate it lower than I did, but I can understand why someone else would.  I just don't agree with it.

4 None other, in his first major role. He's as good at this job as he is as a director of *Eva*, which is to say, not all that great.

5 I'm glad you finally got to see this movie.  I think the portrayal of Jiro Horikoshi makes him out to be sort of like Wernher von Braun — a single-minded visionary with selective awareness of just what sort of people he's working for.  The love story had its moments, but ultimately it ended up just demonstrating that nothing really mattered to Jiro except his airplanes.

6 Well, the dispassionate thing is pretty accurate to the desired well-to-do or educated manly Japanese attitude between the wars. A man (and often, a woman of good breeding or noble training) never showed his true feelings on his face or in his conversation, and particularly if things were going badly. At the same time, people of sensibility were supposed to just suss out what these stonefaced people around them were feeling. And there was a lot more elliptical conversation consisting of significant uses of "Ah," by all accounts.

I mean, even the English thought the Japanese took it too far.

Random Anime Picture #87: Say Hi, Tony! For the most part, I really don't much care for Leiji Matsumoto's WWII OVA entitled The Cockpit.  Of the three parts, only the middle one, "Sonic Boom Squadron", is any good.  Which doesn't mean that the other two don't have a bit of eye candy. 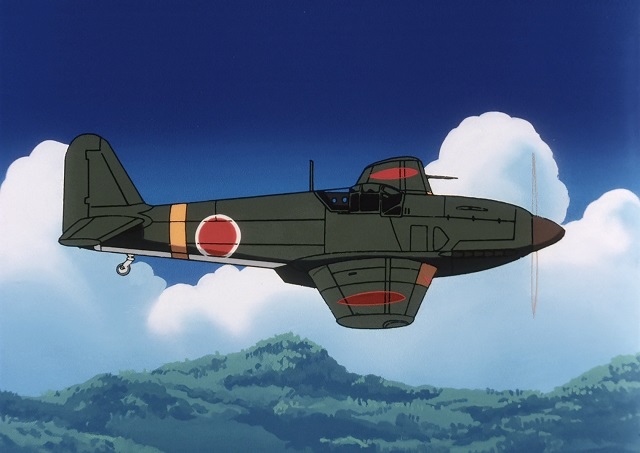 This is from part 3, "Knight of the Iron Dragon," and that's a Kawasaki Ki-61 Army Type 3 Fighter, better known as the "Tony".  It was the only Japanese fighter in WWII to use a liquid-cooled inline engine and proved to be pretty good, all in all.  Over 3000 were built, and served all the way until the end of the war.

I still don't recommend The Cockpit, but it's not all that often planes like the Ki-61 get any love.

1 I've read that by the end of the war, the Tony was the only fighter the Japanese had which was still competitive. (The Zero had long since been outclassed by the Hellcat and the Corsair, because American pilots had learned how to exploit its many weaknesses.)

2 Of course, by the end of the war Japan's pilots were inferior to America's pilots, due to lack of fuel and thus inadequate training. No plane can surmount that disadvantage.

3 It's the only early-war plane that was still competitive, yes, but not the only Japanese fighter that could fight on an even basis.

The Kawanshi N1K, better known as "George" was probably at least as good as a Hellcat in both speed and agility, not to mention armor and self-sealing fuel tanks.  It wasn't even with a Corsair, but it was in the same area code.  There just weren't that many made (around 1000 of all types, including the floatplane version that gave birth to the design), and they all suffered from reliability issues.  More were lost to operational problems than to combat.

Given that the Tony was powered by a licensed version of the famous Daimler-Benz DB 601 (The same engine used by the most common - and popular - marks of the Bf 109.), it is not surprising that it could hold its' own for so long.  The Italians also licensed the DB 601 and built a capable fighter around it, the Re.2001.

As a side note - Eric Brown regarded the Bf 109 as close enough in performance to a Corsair that victory in combat would depend mainly on the pilot skill and the conditions of battle.  That suggests the same would be true of the Tony, let alone the George.