Name This Mystery Ship IX Just because I stumbled upon this story last week, name this mystery ship! 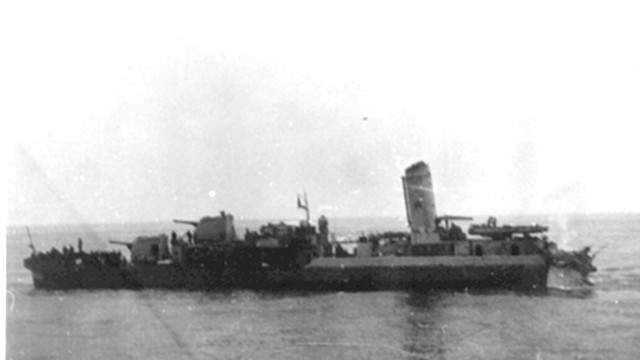 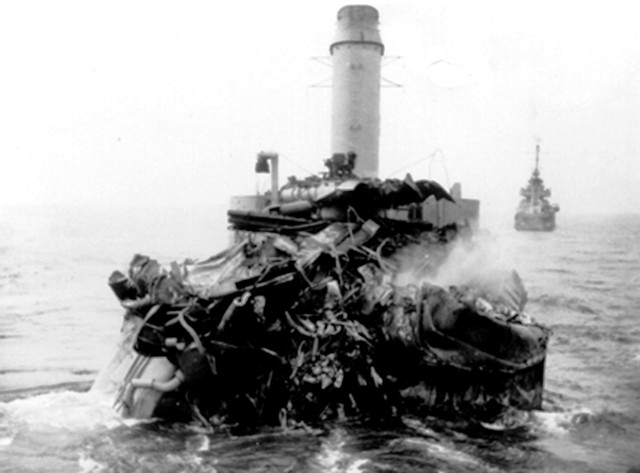 No cheating, folks... that takes all the fun out of it.

1 Clearly that is DD-.  I'm not sure what the designation of the missing front half is though....Ouch!

2 Is this the one that turned in front of the Australian carrier? I think that the DD that was hit had a helicopter hanger though.

3 I'm guessing its the Murphy (Murphie?)...or at this stage in her career the Murp.

The bow of the Murphy is, IIRC somewhere off Delmarva and is a well known site because divers for years were looking unsuccessfully  for the rest of the ship.

4 Brickmuppet for teh win!  The USS Murphy (DD-603) was on convoy escort duty, approximately 75 miles out from New Jersey when she encountered the SS Bulkoil at night.  The Bulkoil was heading back to port after experiencing an engine failure when she heard a "torpedo" to port on her sound rig.  Naturally, she turned into the "torpedo" so as to decrease her profile.

Problem is, the "torpedo" she heard was the Murphy, tracking a sonar contact of her own out ahead of the convoy.  The Bulkoil hit the destroyer just behind the bridge and cut through, shortening her by about 70 feet.  The bow portion sank in just a couple of minutes, taking 36 souls with it.  The stern section stayed afloat, was towed back to New York Navy Yard, and seven months later emerged with a new forward section.

She served at D-Day then was eventually assigned to the Pacific Fleet where she was, apparently, one of the first (if not THE first) American vessel to reach Nagasaki after the bomb.

6 To clarify my request: Only as it applies to one of your illustrations in this post.

7 David, you are thinking of HMAS Voyager that was cut in half by HMAS Melbourne. It also collided with USS Frank E Evans (obviously not at the same time).

8 Actually, I wasn't thinking of any ship in particular.  It was just obviously the rear "half" of a destroyer, and I felt like making some kind of comment.

I was also assuming that the damage was from a torpedo hit, not a collision, which explains why my search didn't lead me to an answer.