Ships, Nothing But Ships So I've been spending time looking at warship photos as of late, and I've come up with a bunch of good ones for display over at Reddit's r/warshipporn subsite.  I don't think I'm tooting my own horn when I say I'm the most clever as far as picture titles go, but this post isn't about that... no, it's about my favorite pictures that I've put up.  To start with, I was using my "mystery ship" competition shots, but I've spread out since then.  Like this one: 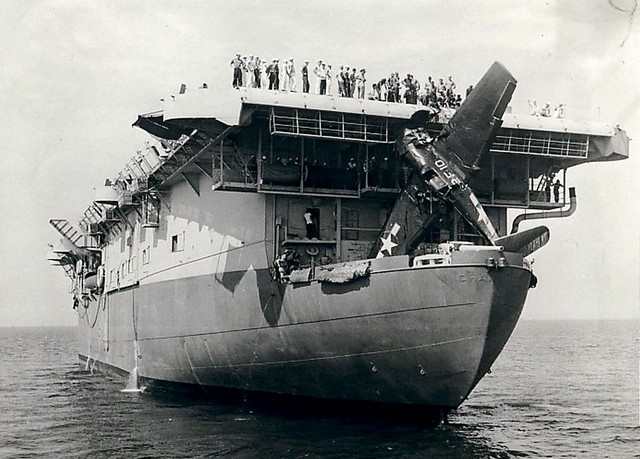 Right in the ol' spud locker!  I'm pretty sure that the Hellcat just rolled off the end of the USS Charger's flight deck, but that's not what it looks like!

At little bit grim but a photo that has been memorable for me was taken at the moment USS SAVANNAH was hit by a German Hs 293 guided bomb.

The Books of Midway 71 years ago the US Navy won the greatest victory at sea, perhaps ever.  It will come as no surprise to most of my readers that I've been fascinated by the Battle of Midway for years.  Last night, I realized that I had no plans for the annual June 4th post, so my eyes headed to The Shelf.  Perhaps one of the books there could give me an idea... and then I realized that the idea was staring me in the face. 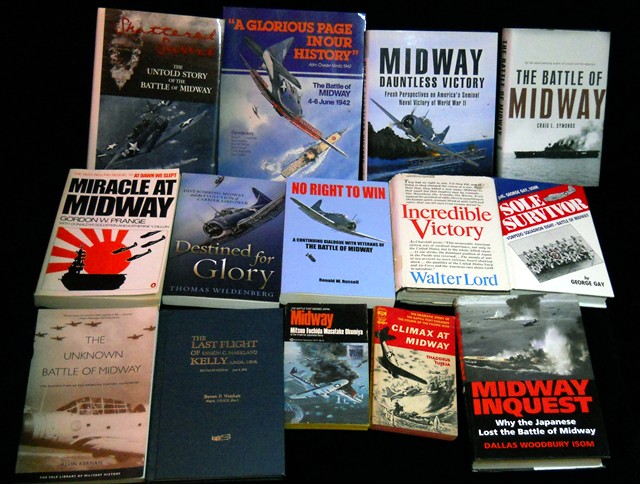 Not all of these books are excellent, of course.  There's really two categories of Midway books: those heavily influenced by Mitsuo Fuchida's Midway: The Battle That Doomed Japan, and those that aren't.  It's that second group where you get the real meat.  All four of the books on the top row fall into that rarefied strata... which is not to say that the above picture has the books in any sort of order!  They're just positioned to fit in the picture.

Even the books from the first category, such as Gordon Prange's Miracle at Midway, have substantial value.  Ironically, the weakest book of the bunch is the very first: Fuchida's.  It has been made clear through ongoing research, both here and in Japan, that he played fast and loose with the truth.  Well, that's unfortunate, but the truth appears to have come out.

I haven't completed Dallas Isom's book, so I can't say what I think of it yet.  What I've read has managed to furrow my brow a few times... not always in a good way, it must be said.  It's certainly been worth the $4.95 I spent on it, though.

Of course, I forgot to put my newest addition in the picture... it's sitting on my dining room table.  I haven't read it yet; it's going to be my business trip reading in a couple of weeks.

I wonder if any other single battle has generated as many books as Midway has?  D-Day, probably, but that isn't really a single battle, is it?  The Battle of Britain, likely... except that was less a battle and more of a campaign.  Maybe Stalingrad... but probably not.

And that's how it should be.

It appears a big reason why Mitsuo Fuchida has been such a major influence on both accounts of both Midway and Pearl Harbor was because he deliver his accounts in English direct to the US audience.

I do think Stalingrad has generated more books than Midway, but Stalingrad might be regarded as a campaign as well, if you look beyond the battle for the city.  The main difference is that most of the books on Stalingrad are published in either German or Russian, which can skew the number.

2 Do you have any idea how many books have been written about Waterloo? (And most of them were wrong!)

3 Amazon US search results in the "Books" section:

I think D-Day takes it, with Gettysburg a distant second.

4 I can well believe that Gettysburg gets a great deal of attention, because there's just so much to talk about. Few battles were as long, and as complex, and as important, and as close.

5 But the real question is how many historical fiction books. And how many romances. Waterloo and Gettysburg are way, way ahead.

Midway is really, really not going to win the romance category, unless we start having American magical girl historical romance as a major subgenre. It's got a chance with historical fiction and what-if sf, though.

6 Dien Bien Phu might have a lock on the romance category, given that the French fortified positions were named after the commander's many mistresses...

Dien Bien Phu might have a lock on the romance category, given that the French fortified positions were named after the commander's many mistresses...