The Forgotten Pearl Harbor Memorial The whole world is familiar with what happened to the USS Arizona at Pearl Harbor that fateful day in December of 1941.  In remembrance of that tragic loss, a touching memorial was built over the sunken remains, and is a tourist attraction unlike any other perhaps in the world. 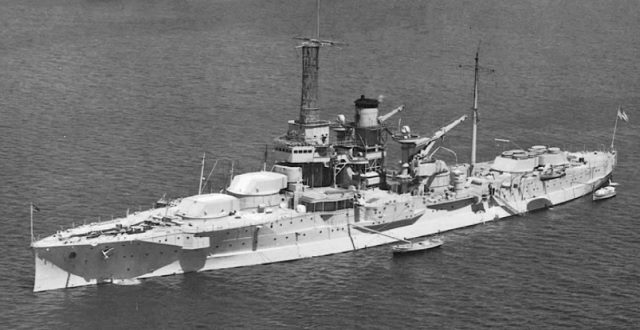 In 1941, the USS Utah was no longer a glamorous ship.  Once a Dreadnought era Florida-class battleship, in 1931 she was converted to a radio-controlled target vessel (AG-16), both her main and secondary batteries removed, and her torpedo bulges shaved off the hull.  In 1935 she was given a the new assignment of anti-aircraft training.  To which end, she was given an ever-changing collection of AA guns, from .50cal machineguns all the way up to the famous 5"/38 dual-purpose gun.  It was in this duty that she was at Pearl Harbor on Dec 7th, 1941. 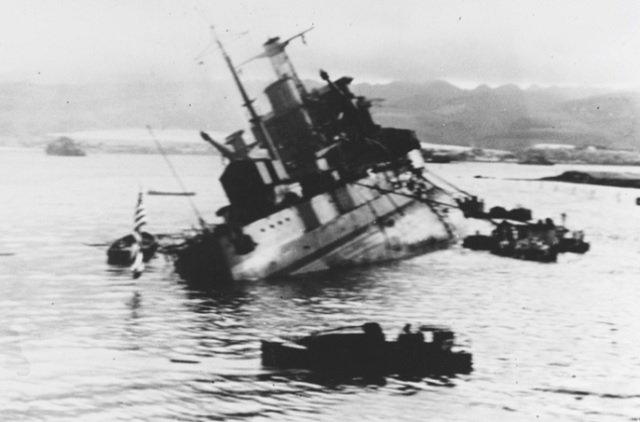 Moored in a position normally used for the US Navy's aircraft carriers, torpedo planes from the Japanese carrier Soryu closed in on her.  While the squadron leader waved the run off, correctly identifying the Utah as not worth attacking, six planes did not get the message and dropped on her.  Of these six torpedoes, two hit the seriously unprotected vessel which immediately began to list .  Some 12 minutes after the attack on her began, she rolled over onto her port side and settled to the bottom of the harbor.  Some years later, an attempt to salvage her was made, but was unsuccessful.  It was decided to leave the hulk where it lay. 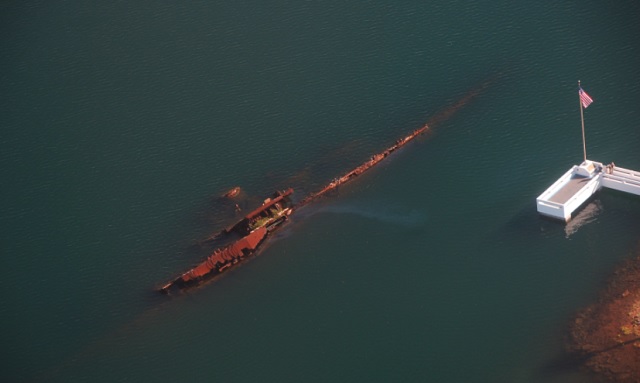 A small memorial plaque was placed in 1950, and a larger memorial erected in 1972, seen to the right in this picture.  Only those with a military ID can visit, and like the Arizona Memorial, it is considered a war grave as the ship still holds the remains of 58 crewmen killed on Dec 7th, 1941.  She's not as well-remembered as the Arizona; she was neither as glamorous or her loss as dramatic.  She is still one of a perishingly few remaining touchpoints for the events of the day that began the Pacific War.  In many ways, she deserves better. 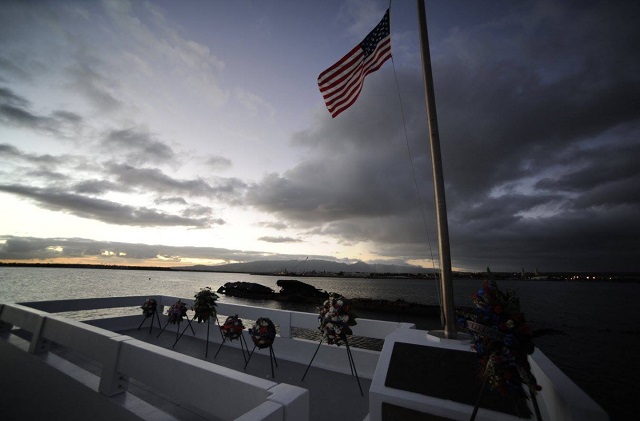 1 Huh. You learn something new every day.

I'm guessing that either more or fewer torps dropped on the Utah would've made basically no change in what came after, but still. She took enemy hits meant for other vessels, that's gotta count for something.

2 A single torpedo hit may have been survivable.  Emphasis on "may".  She did not have what you'd think of as a full compliment of men onboard for a ship that size, only around 500.  For a ship basically unprotected against torpedo damage, they might have been able to save her if she'd only taken one.  The ship had just come off an advanced gunnery training cruise, so she was about as ready for action as she could be, I suppose... not like she was having major internal repairs or something.
Anything more than the two she received... well, she capsized in 12 minutes.  It's hard to imagine her going over any FASTER, even with more hits.

3 The flipside of my pondering is, if she'd taken the full complement of torps (if the squadron leader hadn't been perceptive enough), would that have helped anything else in the harbor? (I'm guessing not. There were bombs and torpedoes aplenty for everyone, one presumes.)

The Marines, gathered at the stern of the troop transport, directed their attention to the weatherbeaten sergeant.  Some distance away, the big guns of the Colorado threw 16" shells at a small piece of land in a very large ocean.

"All right.  Someone up the chain screwed the pooch.  There ain't no tide today, so the landing craft can't get over the reef."

Someone piped up with a lighthearted tone in his voice: "So we're going home, right?"
The sergeant rolled his eyes.  "Yeah, Jenkins, we're going home.  The war is over.  We won.  And it was all because of you."  The gathered group of men laughed, but there was an audible tightness to it.  "Nah, we ain't that lucky.  We're going in on the alligators."  A muted reaction from the men told what they thought of this... the LVTs might well be able to climb over the reef and carry them right to the beach, but on the other hand they had no armor and were slow in the water.  "Any questions?"
Silence.  "Awright, lets go."
The men burst out with the traditional "OORAH!" as they moved to the ship's rail... all but one of them.  That one Marine joined in with a loud, clear "QUACK!" 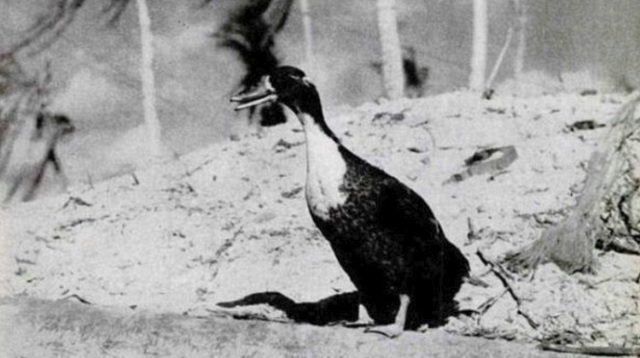 The target was Tarawa.  And Siwash was going to war.
more...

1 That is a wild story through and through. Devil Duck, indeed.