The Misfit Battleships When one thinks of battleships, what leaps to mind?  The gleaming Iowas, usually.  Others would think of the hulking Yamato-class, still the largest battlewagons ever built.  Or perhaps the menacing Bismarck and Tirpitz, pride of the Kriegsmarine would hold primacy over all.  If you have a sense of history, classes like the Nevada/Pennsylvania, with their cage masts and one of which, the Arizona, is now one of the US military's most hallowed sites.  Or the first of them all, the Dreadnought.

And then there's me.  I'm a weirdo, because my favorite battleship class is one that few people know or (historically) care about.  You see, I'm a fan of the Nelsons. 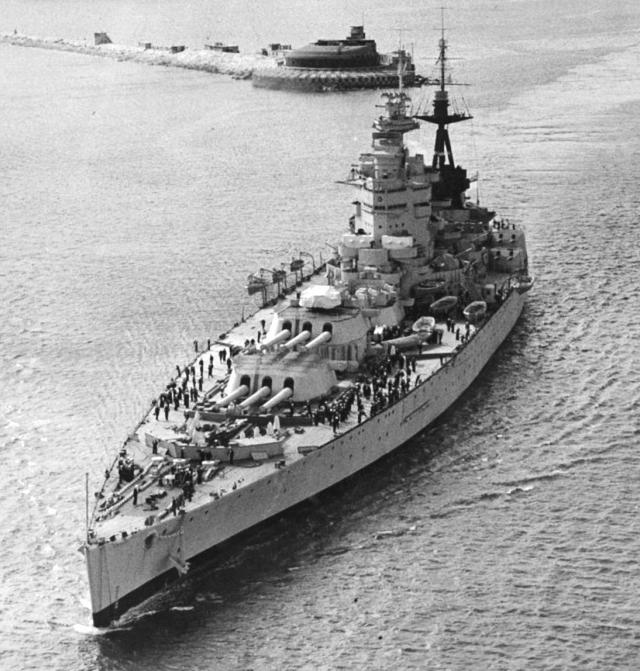 The sharper-eyed amongst you have already noticed the obvious difference.

1 Dang, got me. I didn't spot that 3rd turret in the first photo.  I realize they'll never build battleships again despite the wishes of some of the old boys in the US Marine Corp, but sometimes I play a mental fantasy about how and what it would take to build a modern equivalent for shore bombardment.

2 Who knows; perhaps the Nelsons will get the Yamato treatment someday. It happens more often than you'd think.

Warbird Up In the comments of my post on the paddlewheel aircraft carrier Wolverine, reader The Old Man asked "How many WW2 carrier training birds are on the bottom of the Great Lakes and perhaps could be salvaged?"

Well, as of Monday afternoon the answer is "one fewer," as salvers brought up a doozie. 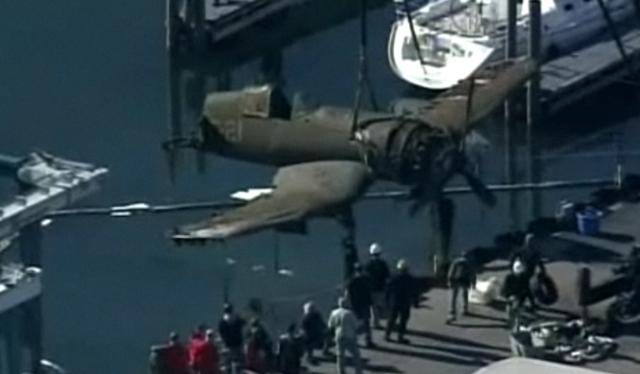 It's a Corsair, but not just any Corsair.  That right there is the world's only known surviving F4U-1, the first marque of the bent-wing bird.  It was sometimes known as a "Birdcage Corsair" for the latticework framing of the cockpit. 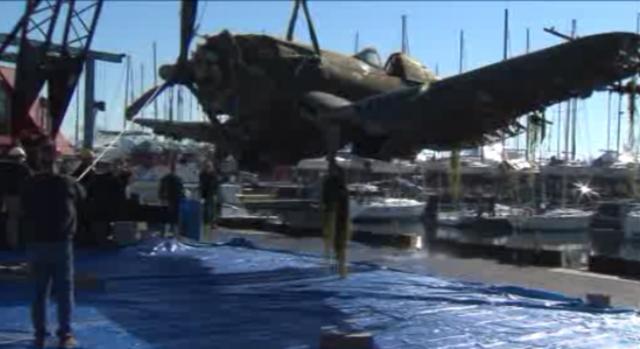 On June 12th, 1943, Ensign CH Johnson tried to land F-21 on the deck of the Wolverine.  Losing sight of the LSO on approach, a common enough occurrence for the long-nosed Corsair, Ensign Johnson took a wave-off and, applying power, began to peel off to the left.  Unfortunately, he had settled enough that his tailhook caught a wire, slamming the plane down onto the deck hard enough to split the rear fuselage from the rest of the Corsair.   The tailhook assembly was ripped free of the plane as well.  Both chunks of the F4U fell overboard and sank, though the front section stayed afloat long enough for Ensign Johnson to escape without harm. 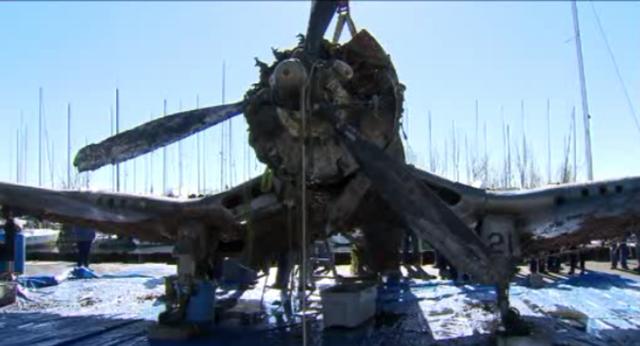 The plane is in remarkably good shape for having been submerged in Lake Michigan for 67 years.  The underside is coated with zebra mussels, a common enough problem in the Great Lakes these days.  There is rust, of course, but the structure of the Corsair is wholly intact.  Indeed, the salvers brought up both pieces of the plane.  The only bit missing?  The tailhook assembly.  Eventually, the F4U-1 is destined for the National Navy Aviation Museum in Pensacola, FL. 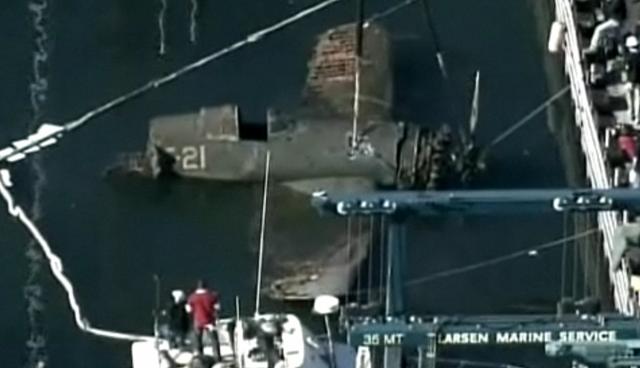 The salvage company that performed the rescue, A&T Recovery, says that there's at least 80 more warbirds sitting on the bottom of Lake Michigan, many of which are within 50 miles of Chicago.  Almost all of them are Dauntlesses and Wildcats of various types.  The F4U wasn't seen in the air above Lake Michigan, as the Wolverine and Sable were really not big enough to handle them comfortably.  It may have been there as part of an attempt to requalify the Corsair for carrier operations, as the type had already been limited to ground-based squadrons in late 1942.

While Ensign Johnson got away unharmed from this crash, he wasn't so lucky later.  He was killed in a midair collision over Hawaii on Thanksgiving Day, 1943.

1 Bloody awesome.  Remarkable condition for the time spent underwater, but I imagine cold temps at depth had almost everything to do with that.

I knew the Great Lakes had a number of shipwrecks on their bottom, but I never thought about airplanes.

Interestingly enough, that wreck doesn't appear on Wiki's page of surviving Corsair's...yet. (There are five F4U-1A's listed, but no F4U-1's.)

4 Karrde, I don't think it counts as a survivor yet.  I mean, look at it; two pieces, both heavily rusted.  It will, eventually, but not yet.

It never will be flyable, by the way.  The Naval Aviation Museum is all static displays; they won't restore it all the way, even if it could be.

5 A D*** shame that IMO. When I went in the USAF in '67 there were still some WW2 birds flying, making that wonderful noise. As the saying goes "Jet noise, the SOUND of FREEDOM." so to is the beat of a recip on run-up.

6 Much better condition than if it had been in warm salt water.  I'd read about this on the 'net earlier but it didn't really hit me what the fuss was about until I saw the photo of that three bladed prop.  I'm so used to the four "paddle wheels" of the later models.  You can actuall read some of the lettering on it and much more of the sheet metal is there than what I'm used to seeing.  Some of the local guys who troll the Texas fresh water lakes with magnents say that they've pulled up stuff steel that was rusty but that if it was from deep enough down it was surface rust.  A couple have firearms that they restored to working condition. The mineral contents of the lakes cause a variation of course.