Akagi Found! As I semi-postulated would occur in the Kaga post, Paul Allen's team has now found what they are pretty sure to be the Akagi. 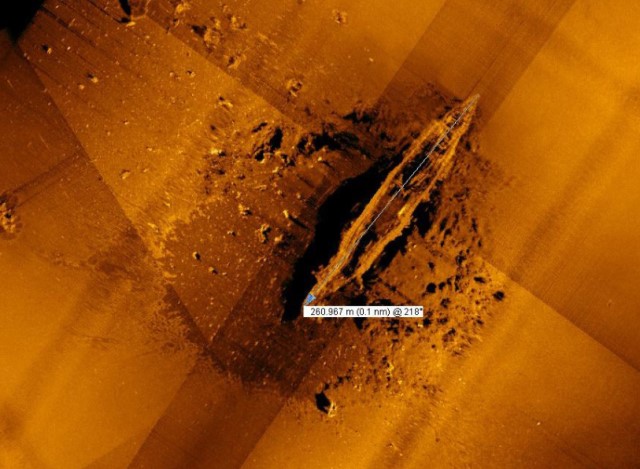 Guess the report on them having another ship's location was right!  All of this was breaking just shortly before I'm typing this, so we don't have much information yet, and the RV Petrel apparently either hasn't been down yet or they haven't released any footage.  Still, we can tell a lot from these sonar images.  Like Kaga, Akagi is sitting upright, and it sure looks like she hit with not too much horizontal motion.  I'm hardly an expert on that sort of stuff, so take it with a grain of salt. 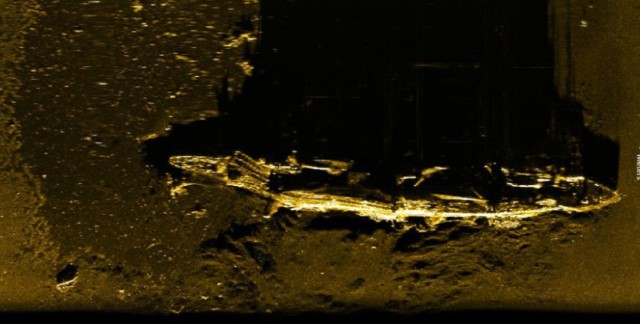 I'm pretty sure the bow is to the left in both images.  If she landed stern-first, that might explain the "arrow-head" shape... the impact could have compressed the stern maybe?  Of course, the flight deck is gone, though I wonder if the Akagi's massive underdeck supports might still be there?  In any case, this is just as exciting as the Kaga finding, and for similar reasons.  Hopefully we'll get to see more as the day goes on! 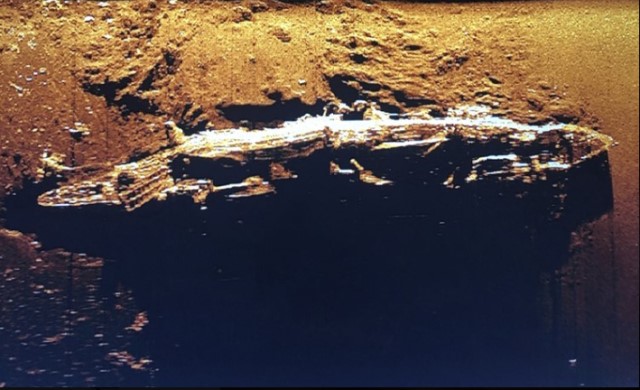 edit: forgot to mention... according to a comment I saw from Jon Parshall over at the Petrel's facebook page, the Nauticos company did not share the location of the chunk of Kaga's hull with Paul Allen's team... they found the ship on their own, making all this even more incredible.

2 Soryu would be the obvious next one to be found.  She went down in the vicinity of Kaga and Akagi and around about the same time.  If the Petrel Bunch are still searching (instead of researching the hell out of the two wrecks they've already found), I'd expect her to be located within the week.
Hiryu and Mikuma will be much more difficult to find as both were sunk after a substantial amount of undamaged sailing time.

3 "What's next?" led me to wonder "What's left?"  And a quick google search is surprisingly unhelpful.  There are of course tens of thousands of shipwrecks scattered on the ocean floor, and there are some major ships of historical interest like the Santa Maria waiting to be found, but of the major WWII combatants that got sunk, I can't seem to find a list of the ones that haven't been found.

4 Clearly there can only be one next target for the search.

5 Well, they found the Yamato in 1985, but as far as I know finding the Space Battleship Yamato would involve time travel or dimension jumping.

Shokaku, Taiho, and Hiyo would be nice finds, but the water depth for them are probably far deeper than at Midway.  A similar problem would apply to USS Princeton.

HMS Barham should be easier - the depth is not as deep and they should have a good idea of where she, but given how far off HMS Ark Royal was compared to where the Royal Navy recorded her as sinking at, it will not be easy.  The three Italian heavy cruisers lost at Cape Matapan would have the same issue.

7 Sorry about the outage, your site should be back to normal now!

8 And the answer for "next?" appears to be Johnston, or possible Hoel, the ID isn't confirmed yet.
The crew of R/V Petrel must be working their behinds off, but the thrill of finding one historical wreck after another has to be amazing.  I imagine they've done a ton of prep work to narrow down these search areas.