GOTCHA! The USS Phoenix (CL-46) was a Brooklyn-class light cruiser built for the US Navy in 1938.  She was considered a light cruiser because her main armament consisted of 6" guns; 8" rifles were the hallmark of the heavy cruiser.  However, there weren't many ships of any fleet that would want to get within range of a Brooklyn: she carried fifteen Mark 16/47 guns in five triple turrets.  While that armament wouldn't sink a battlewagon, it'd chew the upperworks to pieces. 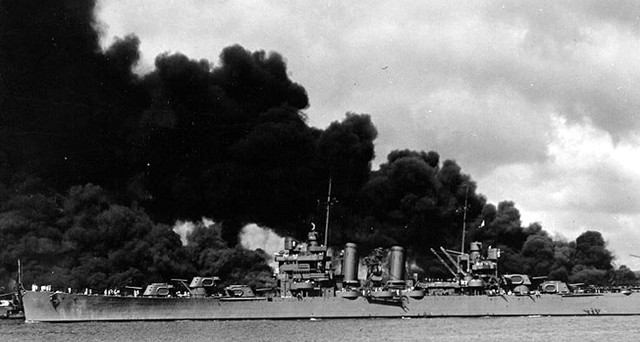 The Phoenix had an adventuresome war from the get-go.  She spent nearly the entire time in the Pacific (other than a quick run to Casablanca in 1943, to deliver SecState Cordell Hull to a meeting), and was at Pearl Harbor on December 7th, 1941.  She herself suffered barely any damage throughout the conflict, losing only one man to enemy action (near as I can tell, that is).  When the Surrender was announced, she was heading to the US for a refit.  She then officially joined the Atlantic Fleet just long enough to be transferred to the Reserve Fleet (Philadelphia) in 1946.  Where she sat until 1951, which is when she was sold.

To Argentina, who renamed her ARA 17 de Octubre.  Shortly after the coup that overthrew Juan Peron, the Argentinian Navy gave her the name under which she became famous: 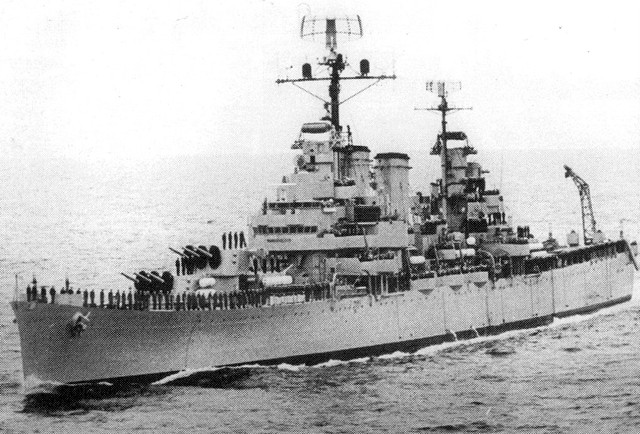 The General Belgrano.  During the Falklands War, on May 2nd, 1982, she was involved in maneuvers against the oncoming fleet of Royal Navy ships.  Thought to be part of a pincer operation with the 25 de Mayo, an ex-RN CVL carrying A-4 Skyhawks, if the Belgrano could close with the thin-skinned RN vessels, there'd be serious butchery at sea.  Modern vessels aren't armored the way they used to be; the Belgrano was built like a bank vault in comparison to the Type 42 destroyers and the various frigates she'd be facing.  She was a serious threat.  And the Brits had a serious way of dealing with her: the nuclear-powered submarine HMS Conqueror, which had been shadowing the Belgrano for 36 hours.  Once given the go-ahead, she fired three WWII era torpedoes at the cruiser. 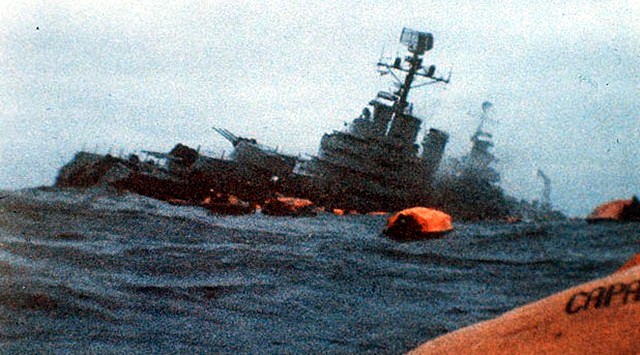 The second hit her forward of "A" turret, carrying away 40 feet or so of her bow.  The third missed altogether, though it carried on and dented an Argentinian frigate (no explosion) some distance away.  The first torpedo hit just behind the side armor plating, penetrated into the hull of the ship, then detonated.  The explosion vented the boiler room to the sea, which began flooding immediately.  It also blew out vertically, destroying two mess halls and a recreational area before taking out a 60 foot chunk of the main deck. 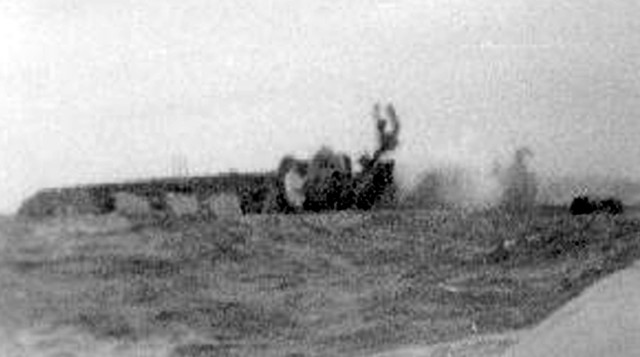 After her remaining crew had abandoned ship, the General Belgrano rolled on her ends, then sunk stern first.  770 crew were later rescued, a nigh-on miraculous feat, considering that her escorts never knew she was in trouble and sailed away. 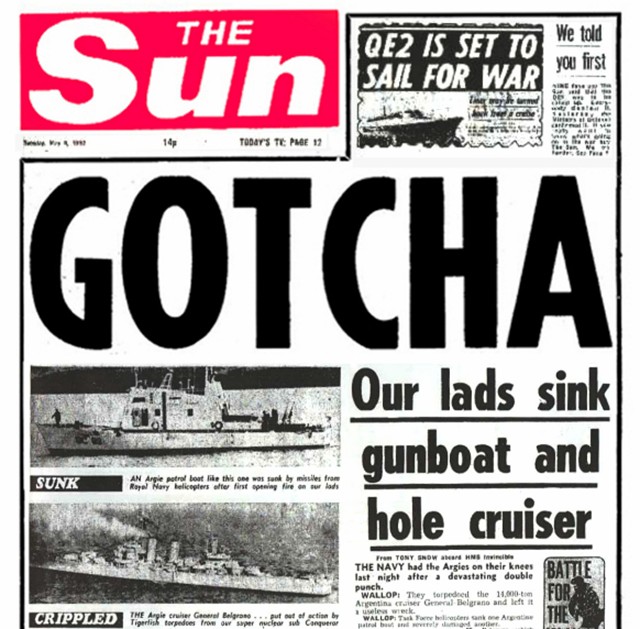 1 Max Weber is less kind to the captains of the escorts with regards to not hanging around to pick up survivors in his history of the Falklands War.

The sinking was a little controversial back when it happened. Britain had declared a "total exclusion zone" that was, IIRC, 200 miles from the Falklands and announced that it would attack any vessels in that zone; the Belgrano was outside that zone by a good bit when it was sunk. The usual suspects got the vapors at the idea, while the military thought it was daft to go to the trouble of declaring an exclusion zone and then proceed to ignore it.

Funny little war, really. Can't imagine why they seem to want another go - it's not like we have the Soviets to worry about these days, hm?

2 What was particularly weird about the reaction to the sinking was that the Brit government sent the Argentine government a letter making it clear that the war zone was NOT the exclusion zone.  The exclusion zone (200 mile radius from the Islands) was there to prevent neutral shipping from wandering into the free-fire area; both sides knew that their own military vessels were targeted anywhere.

In theory, if a RN DD stumbled across an ARA frigate near, say, southern Japan, the two could immediately start shooting at each other.

There's no way the skippers of the Belgrano's escorts should be given a free pass.  Not sinking (or even detecting) the Conqueror is one thing... the SSN's job is to be unheard, after all... but it's a completely OTHER thing for that WWII-era cruiser, that's ON YOUR SIDE, to be unheard while it's sinking.  Bloody miracle any survivors were found, let alone 700+.

What is really funny is that usual suspects who claim the sinking of the General Belgrano to be illegal have largely based their case on the fact that she was heading west (i.e. Away from the ships of Operation Corporate.) when HMS Conqueror torpedoed the cruiser.  But the Argentine Navy has admitted that the Belgrano and her group were simply on the westward leg of her patrol circuit, not heading back to port, and was ready to attack the British if the opportunity arose.  Thus the British sinking her should not have come as a surprise to anyone.

A footnote to the story is that the Argentine operation which was suppose to have aircrafts from 25 de Mayo and the Belgrano hit the British task force was postponed before the cruiser's sinking, supposedly because the wind was too light for carrier operations.  However, it appears the actual reason is that the Argentines had lost track of where the British ships were, and thus were marking time until they could be located again.

Then we have the story of the RN Sea King which ended up ditching in Chile, but that is a story for another day.

Avatar - it seems like the Argentines always press on the Falklands whenever the government of the time has domestic problems.  That was why the Junta went for invasion in 1982.

There was also the attitudes of the British over the Falklands (There are the usual voices in Britain who call for handing the islands over to the Argentines now, as then.), and attitudes of other nations vis a vis the issue.

Mind you, the correlation of forces today would indicate the British that was less capable in some ways (The Royal Navy has one carrier.) and more in others (Tornado fighters based in the Falklands, and cruise missiles from SSNs.).  But correlation of forces did not matter to the Junta in 1982 and it might not matter to an Argentine president now, both trying to save their position from internal opposition by whatever means possible.  I sincerely hope President Kirchner remembers the fate of the Junta when she grandstands over the Falklands but there are strong reasons to doubt it.

5 At one point I thought this was the last time a submarine fired on an enemy warship and sank it.

But a couple of years ago a North Korean submarine sank a South Korean surface warship. Which damned near restarted the Korean War.

6 They want another go because Brits are dramatically weaker now than in 1982.

8 According to this chap, the British had sigint indicating that the Belgrano was headed to a rendezvous point inside the exclusion zone.  They chose not to reveal this at the time in order to avoid revealing their sigint capabilities.

Personally, I roll my eyes at the thought that sinking an enemy warship in a time of war could ever be considered controversial.

9 They probably are encouraged to make another go at it because the president of the US tried (but failed) to refer to the Falklands by the Argentinian name.  A strange choice that ranks up there with the administration official who referred to Jerusalem by the Arab name for it.

Personally, I roll my eyes at the thought that sinking an enemy warship in a time of war could ever be considered controversial.

Name This Mystery Ship XVI Sometimes the Mystery Ship I trot out for these contests are found long in advance, carefully stored away until the time comes to spring them on my unsuspecting readers.  Other times, it's serendipitous.  They fall in my lap completely by accident as I'm doing something else altogether.

FDM, CXT, you two have been moved to to "master-level," so you can't play on this one.  Everybody else, take your best shot!  The winner gets a post on a topic of their choice... but no cheating.  If you cheat, you make little duckies cry, and big duckies angry.

2 Yeah, it sure looks like the Savannah to me.  I was looking at French, Italian, and British cruisers, but nothing matched the 3-gun turrets, two funnels,and main deck line.

3 USS It's Not The Savannah.

4 That's funny, the other night I was half-watching TV and there was a program that briefly mentioned this ship.  In a context rather far-removed from the above photo, though.

Speaking of oddities, certain events over the last couple years had me re-reading some of the books in my collection, which fits in amazingly well with this particular ship.  And it probably cover the same circumstance, or at least the period of time, FDM mentioned.

6 OK, then how about the USS Philadelphia? I could've sworn that is was right over there...

7 It's also not the USS Phila

The white paint job is curious. That isn't combat colors. I wonder whether it's part of the "Great White Fleet", before WWI?

Also, those are mighty small guns. Can't be a BB, and probably isn't a CA either. I'm guessing it'll turn out to be a CL.

9 Using Wonderduck's last hint, finding the matching photograph is trivial. The only difference that I see is that the original has a noticeable U.S. Flag, which is shopped away in this picture for some reason.

10 If I get two guesses, then my last one is the USS Phoenix.  I'm pretty sure that Brickmuppet got the class right, and I think I found the matching photo just before logging for bed.

Why do you have to run these on work night?

11 The flag was shooped out, Pete, to make it marginally more difficult to identify.

Siergen, I'm afraid you don't get two guesses.  I declare this one to be a no-winner.

12 I made a few attempts to figure it out, but came up empty.  The white paint led me correctly to South America, but I didn't investigate thoroughly enough, mostly because I was at work.  If it was still open, I'd probably be figuring it out about now.

The white-ish paint was used quite a bit on US Navy ships deployed in the tropics during peacetime - USS AUGUSTA had a white-ish hull color scheme when she was assigned to the Asiatic Fleet, for example.  The PHOENIX spent some time visiting South American ports prior to the outbreak of the war, so the photo is probably from that time.