Let's Talk Books A couple of years ago, I was at the Duck U Bookstore when one of our history professors came in.  At the time, we had a small area set aside on the counter for "Staff Picks", books that those of us who worked at the Bookstore had read and recommended.  My two picks that month were World War Z, which I had just finished reading, and Shattered Sword, the 2005 book that turned a lot of what was known about the Battle of Midway on its collective head.

Knowing that the professor in question taught a class on WWII, I suggested Shattered Sword to him, and thus began a close to 45 minute dialogue on Midway and the Pacific War in general (it was summertime, during a stretch where we might go the entire day and see maybe three customers).  When we were finished and the prof had purchased both of my "Staff Picks", one of my co-workers looked at me with something akin to stunned disbelief.  "He's a history professor, how were you able to to talk to him like that about his specialty?", for indeed, his specialty was the Pacific War and Korea (where he himself served).

I thought for a second and replied "I read a lot."  Her reaction, again, was stunned disbelief.  "History books?  You read history books for fun?" 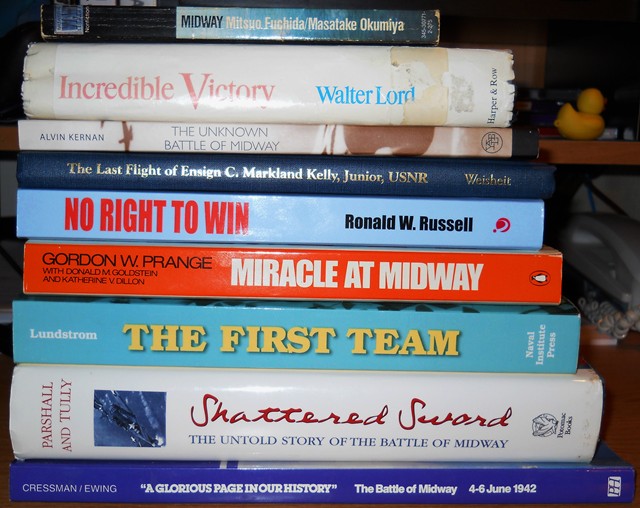 I'd like to write a little bit about some of the books on Midway that I've in my collection, if I may indulge myself a bit... and, seeing how it's my blog, I think I can.

In "The Codebreakers", Kahn devotes an entire chapter to the code group at Pearl Harbor, particularly talking about their performance during the Midway campaign. As you say, it's clear that the code breakers themselves were not in doubt about what "AF" meant, but since they were trying to convince Nimitz to gamble the fleet on it, they needed proof.

The "Midway" movie is a travesty in a lot of regards, especially concerning the codebreakers. That scene where they talked about "15%. No, 10%" is bullshit. In fact, they completely decoded and translated the entire Japanese operational order which was transmitted in JN-25B just before the superencipherment tables were changed, and gave the whole thing to Nimitz so he could use it to plan his battle. He couldn't have learned more if he'd personally attended Yamamoto's flag briefing session.

Bee-YOOT-eeful post, Duck.  Ordered up a copy of "A Glorious Page" while I was reading your post.  Please to send the info WRT Last Flight as I think I need that to go with my copies of Shattered Sword and A Dawn Like Thunder.

Thanks for feeding my history jones....

3 Got interested in Midway flight to nowhere after seeing the movie battle of midway on tv over Memorial day.  The magnetic declination in the Midway Islands in 1942 was just under 10 degree positive from true north.  If that guy that went the wrong way "flight to nowhere" and left the torpedo bombers unprotected had not used this declination it might explain the whole mystery.  This seems to be a common mistake for new crews, especially is they are used to using some other declination say from the US west coast.  Thank God for GPS these days.  Thanks, nice site

If the magnetic declination was added instead of subtracted the difference would be from 240 to 270 degrees, almost exactly (to the degree) the diffence in the flight paths reported during the battle.  Just so no one thinks I'm a know it all, the reason I thought of this was that I failed desert phase of Ranger school for sending my company in on the wrong heading during a raid.  We jumped into in west Texas and heading out on a heading I planed while still in Ft. Benning GA (incorrectly using Ft. Benning GA magnectic declination).

WWII had very unpleasant results much worse than mine, interestingly with possible overall benefit to the battle as chance or providence would have it (who knows what the fighter cover would have been like over the successful bombing runs if this mistake had not happened).  I know its possible to easily screw this up, as it happened to me too.

5 OK I know its 30 degrees verses 20 degrees difference but what the alternative explaination?

I remember that the first one that came down got us over to the left. Lt. Cmdr. Waldron, who was on his air phone, asked Dobbs if that was a Zero or if it was one of our planes. I didn't know whether Dobbs answered him or not, but I came out on the air and told him that it was a TBD. He also called Stanhope Ring from "John E. One, answer" and we received no answer from the air groups. I don't know if they even heard us or not, but I have always had a feeling that they did hear us. I think that was one of the things that caused them to turn north as I think the squadron deserves quite a bit of credit for the work that they did.

Personally, I was just lucky. I've never understood why I was the only one that came back, but it turned out that way. I want to be sure that the men that didn't come back get the credit for the work that they did. They followed Waldron without batting an eye. I don't feel like a lot of people have felt that we made mistakes and that Waldron got us into trouble. I don't feel that way at all. I know that if I had it all to do over again, even knowing that the odds were going to be like they were, knowing him like I knew him, I'd follow him again through exactly the same thing because I trusted him very well. We did things that he wanted us to do not because he was our boss, but because we felt that if we did the things he wanted us to do, then it was the right thing to do.

8 Almost, Steven... it's a quote from George Gay's book, Sole Survivor.  In many ways, it qualifies as fanfic.

Name This Mystery Ship IV While I am working on the post that Siergen won for identifying the HMS Unicorn last time around... he selected a topic I know next to nothing about... here's another possibility for someone to win their very own post on a topic of their choosing!  Name this ship:

Winner gets a post on a topic of their own choosing... hopefully not one as difficult as Siergen's, but pretty much anything is free game!

I'm hoping this one is difficult... if it's not, you guys are even more obsessive than I am!

UPDATE: Okay, maybe it was still "easy."  Only took about four hours for Pete Z to come up with the Wakamiya, a seaplane carrier of the IJN.

She's best known as the ship that launched the world's first naval-launched air raids (against German targets in Tsingtao) on September 5th, 1914... 96 years ago today.  In a way, this humble 8000 ton vessel with its four seaplanes and canvas-and-metal hangars is the direct predecessor of today's 104000 ton, 85 plane Nimitz-class carriers.

Funny how these things happen, isn't it?

1 I think I found it, but since you're still slaving over my last topic

, I won't post a guess in this contest unless no one gets it by Tuesday night.

3 My guess may have been derived from the same set of blueprints (it was laid down a few years after this ship), but yours looks like an exact match, while mine had several differences.

5 My guess derives from typing "seaplane carrier" into Google and then looking at pictures. It only took 10 minutes, but only after I wasted hours trying to match hull design to various IDs and even AKs. I thought it was one of the conversions, I forgot what they were called.

Please post the wrap-up of Rocket Girls that you teased a bit over 3 years ago (thought about asking Oh Edo Rocket, but I doubt you watched that).