The Buffaloes of Finland It is an article of faith that the worst fighter plane of WWII was the Brewster F2A Buffalo.  It's pretty difficult to contest this assertion: in the single true fight it was in, the Battle of Midway, it was essentially massacred by the Imperial Japanese Navy's A6M2 Zero, much the same way a high school team would be by the Chicago Bears.  "It is my belief that any commander that orders pilots out for combat in a F2A-3 Brewster Buffalo should consider the pilot as lost before leaving the ground" reads one Marine after-action report.  After Midway, the barrel-shaped plane was relegated to trainer status, then to mechanic training.  Its passing was unmourned, its memory one of ridicule and scorn.  The British and Dutch, who also received versions of the Buffalo, felt similarly. 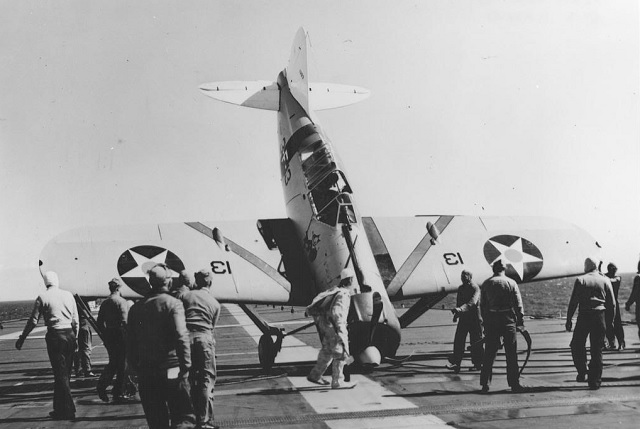 It fell to the Finnish Air Force to give the Buffalo its taste of glory.

Buffalo was definitely not a bad plane - the main problem appeared to be Brewster's inability to produce enough of them to where improvements, incremental and otherwise, could be incorporated into the design and turn an average fighter into a winner.  It is not often realized that Grumman did a major redesign of the F4F Wildcat before it surpassed the Buffalo enough to be accepted by the US Navy.

Given the Buffalo's reputation, it is a tribute to the courage of the Allied pilots who flew them against the Japanese, despite being inferior in everything else.

2 It's not well known that part of why the Finns did so well in the Winter War was that the Swedes were totally reading Red Army codes, and providing decrypts to the Finns in a timely manner, meaning the Finns knew what the Soviets were doing at all times.

3 CXT, the Buffalo F2A-2 and -3, the versions the Navy asked for, were indeed bad planes, hideously underpowered for the weight tacked on.  It actually weighed more than a F4F-3 Wildcat.  If they had stayed with the F2A-1, sans armor and all that, it would have been a different story.

But they didn't, and thus a lousy fighter was whelped.

If they had stayed with the F2A-1, sans armor and all that, it would have been a different story.

Maybe, but I doubt any pilot would have wanted to fly a F2A-1 against the Japanese, considering it lacked the features of the later versions of the Buffalo and what the F4F had....

...But given how much more sluggish pilots found the F4F-4 handled, compared to previous marks of the Wildcat...Oh well.

5 Know what?  I'm just gonna leave this here and go take a nap.

6 Back in my Clueless days, I did that once. I wrote an article about Operation Fortitude, and later I realized that I'd written almost exactly the same article about a year previously. I felt suitably embarrassed.

7 The P-39 also produced better results at the Eastern Front than in Pacific.

8 Fortunately, the two posts aren't exactly repeats... one covers the bad side of the Buffalo, the other the good side... but it is, I think, the first plane I've ever given this much coverage to.

I mean, outside of those that have to show up repeatedly, like the SBD, just because of its relationship to the Battle of Midway.

No, I just posted the first one to give CXT more to chew on... and to take a nap.

9 My father was in the Marine defense battalion at Midway. He remembered a Buffalo getting on a Zero's tail. The Zero just did a loop and shot it down.

10 But...but...these aren't buffaloes. These are planes! I was looking for those big animals the Laplanders ride around on in the desert and till their rice paddys with.

11 In all seriousness, thanks.  I had no idea that the Finns didn't get their Brewsters until after the Winter War. That makes their kill ratio even more impressive.

12 In the IL-2 Sturmovik flight sim, I played a Continuation War campaign as a Finnish pilot.  After flying the Gloster Gladiator and being regularly outrun by Soviet bombers, the B239 was a revelation!

13 Were Brewster's infamous troubles from in play at the Queens factory and/or during the Buffalo/B239 era?

Their Warminster, PA plant would get a reputation for a 360-degree mixture of corrupt management,  labor unrest,  and inability to engineer good stuff, resulting in the Buccaneer debacle and their apparently sub-par quality of the few license-built Corsairs they managed to produce...