Random Anime Picture #66: Working On It I'm getting annoyed with myself.  While I've turned out some okay stuff recently here at The Pond, more often than not I find that I'm more whining about work than writing about something interesting.  So, yes, I'm annoyed with myself.

Not annoyed enough to be able to stop whining, but annoyed.  So instead of moaning, kvetching and complaining (and I totally expected FireFoxy to give me the red squiggly line under "kvetching", but it didn't), instead I'm going to give you something to look at.  Here you go: 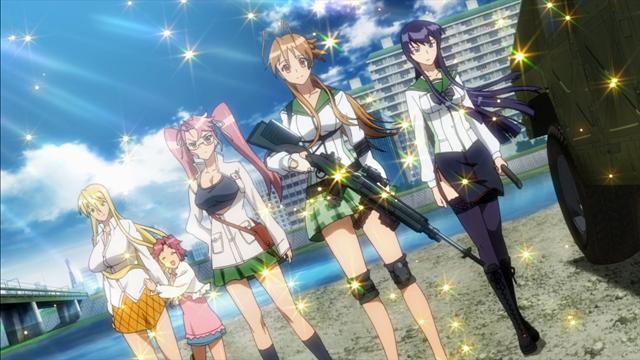 -High School Of The Dead, ep08

And really, that's all you need to know about HSotD... which I really liked.  One of these days, I'll get around to giving the show a full review... maybe an episodic one?... but until then, you'll have to be content with a lack of content.  Or something.

1 And a dozen days till Spa.

2 After witnessing the terrible toll that Rio took on your sanity (and perhaps on your very soul), I'm not sure that another review series is something to look forward to...

3 I don't understand why Rio caused him such psychic pain, but HSoD didn't bother him at all.

4 He saw HSotD AFTER RRG....the damage had already been done.

5 Actually, I watched HSotD as it was airing, i.e. before RRG!.  I did have some problems with HSotD, but as a zombie movie/show, it's top-notch, with good character growth.  I'd probably give it a grade of B-, or 2.5 stars.  Not great, but decent enough.