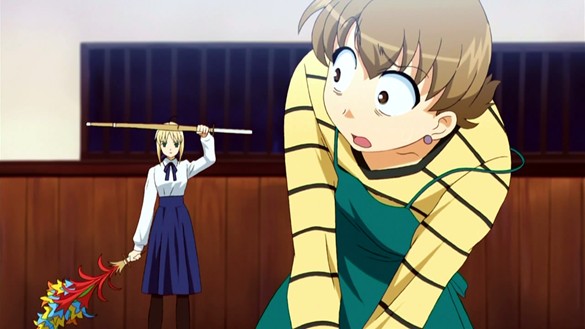 This is funnier out-of-context than in.

Who would have imagined?  F/SN is a slice-of-life fighting show!

UPDATE:  No wonder I like the music for the show: Kenji Kawai was the composer.

1 OK, I think the term "slice of life" is now officially being abused.

2 See, I was all set never to worry about F/SN, and then you had to go and use the magic words:  soundtrack by Kenji Kawai.

I'm re-watching Vampire Princess Miyu TV now, mainly because Kenji Kawai did the OST and it's perfect.  And I'm contemplating watching Blue Seed again (which is, at least, a series with better writing than VPM) because you-know-who did the music, and I happened to listen to a couple of tracks from that OST a few days ago.

*sigh*  The life of an anime fan is fraught with peril.