Random Anime Picture #37: Should We Be Seeing This? 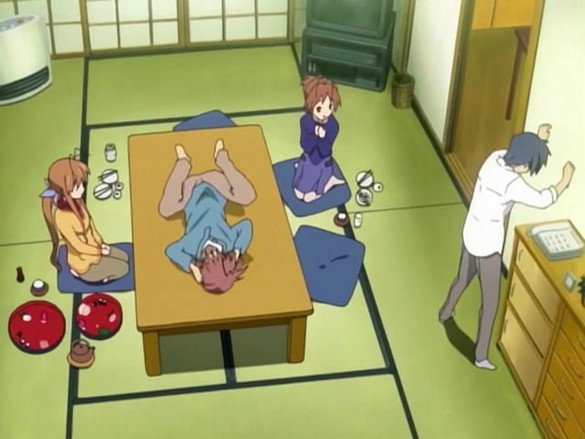 I'll just let you try and figure out what's going on here.

1 Tomoya....just call the ambulance.
You weren't here and this is not your fault. whatever shame and embarrassment  they suffer  is minor compared to what might happen if you let them talk you into going through with this. ethically, from this point any injury incurred will be due to your action or inaction.
You don't have the equipment to safely remove it, let alone the expertise. Given that they phoned you to come over 15 minutes ago there isn't even an immediate time issue now. The gerbil is most likely dead already.

2 Which one is the pregnant one?

3 None of them at this point in time.

5 It was actually a bit of a surprise to me... while it was hard to imagine any other outcome given the After Story arc's reputation, I'd expected it to happen closer to the end. Looking forward to the next episode--where do things go from here, I wonder?

9 Please forgive my thoughtlessness; I should have known better, having followed the widescreen broadcast myself for a while.

10 I've played the game, so I know what you're talking about, but still...