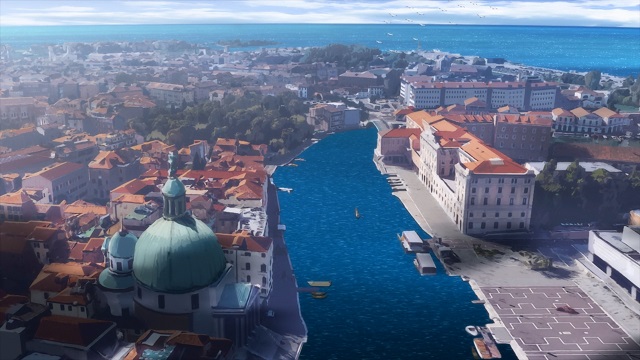 Just watched the raw.  Between my grasp of anime-Nihon and my re-watching of Aria for, well, all the time, comprehension was not a problem.

Moved to tears; it's a glimpse of Heaven.

Thanks for letting me know this was out, WD.  What with the wife's recent chemo, we need some joy.  THANK YOU.

3 Wonder if that's based on a real place, since it reminds me of a scene from Robot Carnival where the two giant steampunk robots fought.

4 It's based on Venice, of course.  In previous seasons, some of the plazas and waterways are quite recognizable.  I don't know to what extent they might have tried to mimic the actual geography.

5 I don't know to what extent they might have tried to mimic the actual geography.

I gather the landmass isn't the same, but almost all of the buildings you see in the ARIA franchise are based off of real-world places in Venice... except for Aria Company.