The Chesapeake Raider By 1912, the US Navy had gotten pretty good at the whole dreadnought thing, more or less.  They'd commissioned six battleships in three classes, carrying either eight or ten 12" guns in four or five twin turrets.  Unlike the Royal Navy or the German Navy which tended to employ "wing" turrets, the US Navy had firmly stuck to putting their turrets on the centerline.  In the case of the South Carolina class of ships, this meant while they only had eight guns, they could all fire to one side or the other.  The original HMS Dreadnought, on the other hand, carried 10 guns: six on the centerline in three turrets, then a wing turret on either side of the superstructure.  Thus both ships could fire eight guns to a broadside, but the SoCar didn't have to carry the extra weight of an extra turret around (note: while it's true that the wing turrets could fire straight ahead or behind, thus giving the Dreadnought an advantage on paper, in practice this was never really done: the gun blasts would damage the ship!).  For the fourth class of US battleship, it was decided that 10 main guns just wasn't enough: twelve were needed.  And thus was the Wyoming-class born. 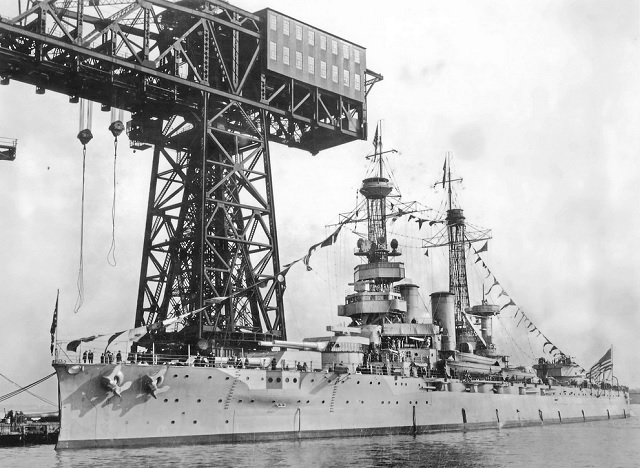 The name ship of the class, BB-32, was commissioned in September of 1912 and weighed in at just over 27000 tons at full load.  While small for what we now consider a battleship, at the time she was the heaviest ship in the fleet and amongst the heaviest anywhere.  She was the first US ship to incorporate an anti-torpedo bulkhead, and her main armor belt was 11" thick.  Her machinery could scoot her along at a touch over 20kts at 26000hp.  What was uncommon about her was the way her guns were arranged. 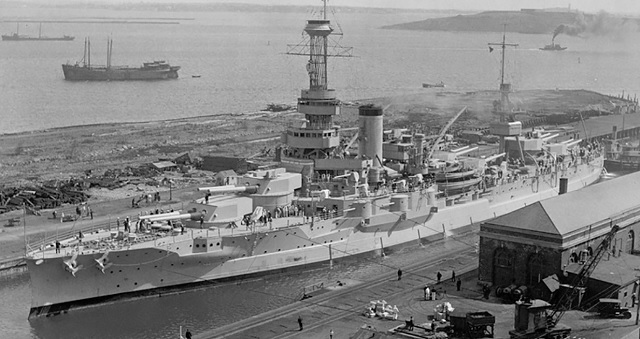 Three superfiring turret pairs, all on the centerline: one pair forward of the bridge structure, two pairs aft.  One pair was roughly amidships, the other aft.  In theory, the four rear turrets could all fire directly astern.  In practice?  Well... not so much.  The superfiring midships turret might be able to, the decklevel one would have serious difficulties.

While I hate to use a videogame representation for this article, good pictures of the ship from the side are hard to come by.  At least this way you can clearly see the positioning of the turrets.  The rear four were all quite capable of firing "over the shoulder", with clear arcs of fire forward.  On the whole, however, the six centerline turret concept can't be considered a success; the extra weight of the turrets, and extra holes pierced through the main deck, put unneeded stress on the body of the ship (the Japanese had similar problems with their Tone-class cruisers, which had five turrets all forward of the bridge). 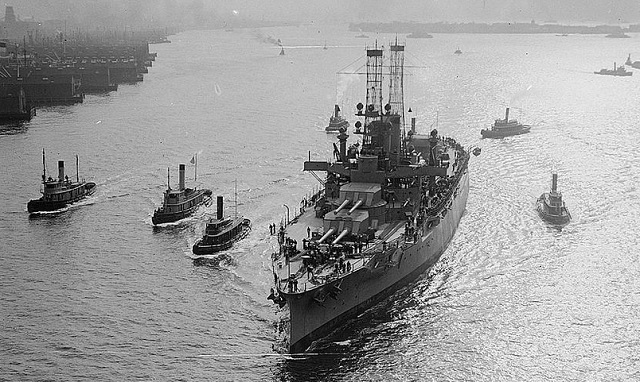 Once the United States entered World War I, the Wyoming was part of Battleship Division 9.  In late 1917, BatDiv9 reinforced the Royal Navy's Grand Fleet at Scapa Flow, becoming 6th Battle Squadron.  The wartime service proved to be relatively unexciting, and Wyoming returned to home waters in April 1919.  She bounced back and forth between Atlantic and Pacific Fleets until the early '30s, when she was named flagship of the Training fleet and began her life as a "demilitarized" gunnery training vessel: half her main guns were removed, her anti-torpedo bulges and side armor went away as well.  It was at this point she was renumbered as AG-17.

In place of the three removed main turrets, a startling proliferation of smaller guns appeared.  From .50cal machinegun mounts to 5" turrets, the Wyoming trained tens of thousands of sailors in the art of naval gunnery of all sorts as World War II got started.  Homeported in the Chesapeake Bay area (ergo her nickname of "Chesapeake Raider"), she served in this manner until early 1944.  At that time, the last of her 12" guns were removed, replaced instead by more 5" turrets. 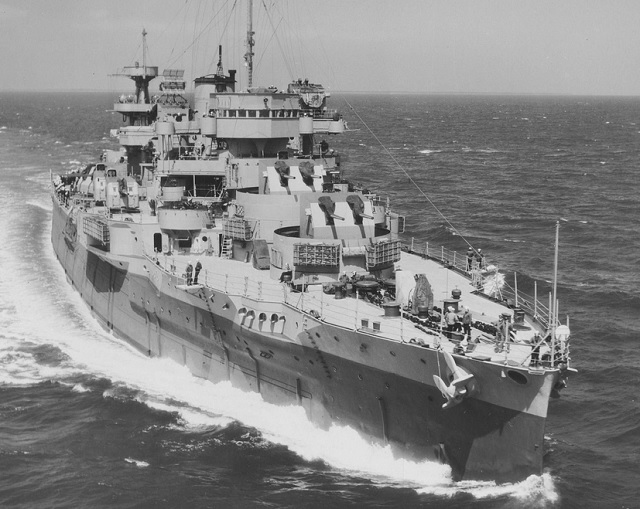 With the arrival of the kamikaze threat in the Pacific, the Wyoming became more important than ever, becoming a testbed for anti-kamikaze tactics.  It was in this role that she was employed when the war ended.  She lasted for a couple more years after that, being decommissioned in 1947 and scrapped at the end of that year.  Not so bad for a dreadnought-era vessel, that.

UPDATE: A closeup shows that they're clearly not lights. 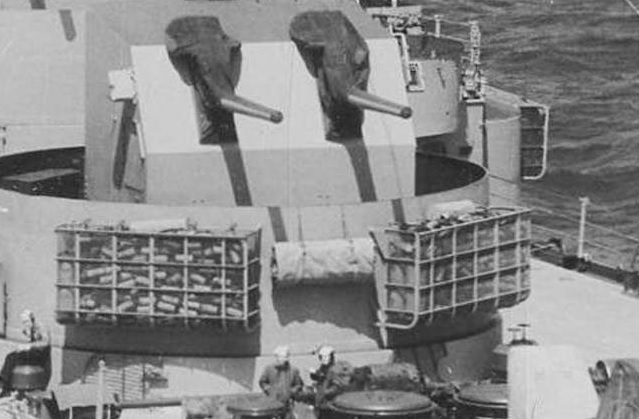 Having said that, I'm not entirely sure what's going on here.  To me, they look like baskets with... floats?... in them?  Like what you'd see on fishing nets.  Emergency-use nets, like if they were rescuing survivors they'd throw them over the side to give the survivors something to climb up?  I have no idea...

1 Why are there so damned many lights?

2 My first guess when I saw those front lines was Wyoming, but then I saw the tiny turrets, and also figured that you wouldn't be that obvious.  I should have remembered that she was converted into a training ship and looked for pictures in that version.

3 She reportedly has the distinction of firing more rounds of ammo than any other US ship during WW2.  Which makes sense, for a gunnery training ship.

The combination of the familiar twin 5"/38 gunhouses that the US Navy put on anything that permitted it, with a hull that still had the outer hull structure for her former casemate guns, were the two clues that allow a quick ID of the WYOMING.

The London Naval Treaty required each of the three major navies (The US, UK, and Japan.) to downgrade a battleship to serve as a gunnery training ship.  Japan eventually rearmed and upgraded Hiei, while the Royal Navy seriously considered doing the same to Iron Duke (As well as trying to buy and do the same to the dreadnought they sold to Chile.) but passed on it due to the cost and more importantly, the lack of shipyard capacity.  The US Navy also considered rearming WYOMING but passed on them (They still had her original guns and turrets, but it would have required yard capacity that could have been devoted to other things.).

And I think I have another example that might make a fine choice for the next Mystery Ship...

6 Those big rectangular things under the front turrets. If they aren't lights, what are they?

7 Steven, if I had to guess, I'd guess those are some kind of basket or something, maybe to hold inflatable rafts.

5" guns don't use separate powder charges; the propellant and projectile are all part of a single cartridge.

In bigger guns, the powder was held in bags which were loaded into the gun and burned up when the gun was fired.

Whatever those things are, it's peculiar because they are not placed to make it easy to get to or into them. They don't make sense as any kind of safety equipment, for instance.

5" guns don't use separate powder charges; the propellant and projectile are all part of a single cartridge.

Not the 5"/38.  The 5"/38 used semi-fixed ammunition, where the powder was separate from the projectile.  The powder were kept in cannisters when they stored - which is what the racks under Turret 1 seems to be holding.

11 Steven, this is what the empties look like.  I'm still not positive, as the objects in the racks look a bit shorter than those powder cases, but it's my best guess so far.

12 Sorry to resurrect a dead thread, but I've been remiss and not read your site for a while. Hope this doesn't die in a span filter for having too many links.
I'm going to go with NOT cases. (Or the things the powder cases came in, which are stubbier-looking.)
I say they're whatever the things on pages 17 and 19 of this NavSource PDF are (hope the link opens the correct page). Floats, or something?
They crop up in a number of places...
Fletchers have them. USS Massachusetts has them (the two twin 5" mounts you can see the front of, have baskets full of the things). USS Missouri has them. In many places.
OMG. IOWA HAS SQUARE ONES. Now I'm just super-confused. Again, Iowa: Mixed square and round ones, super detailed look.
USS Wyoming has them pretty much EVERYWHERE there's a 5" mount.
Q: Whatever they are, why would a training ship need, literally, an order of magnitude more of them?

13 More and more I'm liking my emergency netting with floats idea.  I can't help but think that they look like it, particularly the rectangular ones which are pretty clearly tied together.

Q: why would a training ship need, literally, an order of magnitude more of them?

A: because there's more inexperienced crew on a training ship?

I'm not saying I'm right, just that it seems right.  I could just as easily be wrong, but still have it seem right.

14 Some sort of emergency device for helping sailors not drown, agreed. Particularly, look at the ones on the back of the Iowa turret - they're unreachable during normal operations. I imagine, maybe the ship sinks and they float free for something guys can grab on to? In addition to floating, it would help keep men together on the surface for easier location and retrieval.

Another find: Some 1:350 scale model bits for WWII US ships, including "Rope Floats" and the baskets they ride in.

As a training ship, would Wyoming have an unusually large complement, and thus need more safety gear? Or maybe they just added extras in the hope of saving a few more guys, because the spectacle of a thousand raw recruits drowning withing sight of land in the Chesapeake Bay would be bad?

15 Just finished reading The Last Stand of the Tin Can Sailors. They mention these things - rope nets with rubber floats. A bunch of survivors from the Roberts were on one of these lashed to what was left of a life raft after it got gutted by shrapnel. So apparently they work (for a couple days).