Rollercoaster Just another day in the glorious Pacific Ocean for the USS Lunga Point. 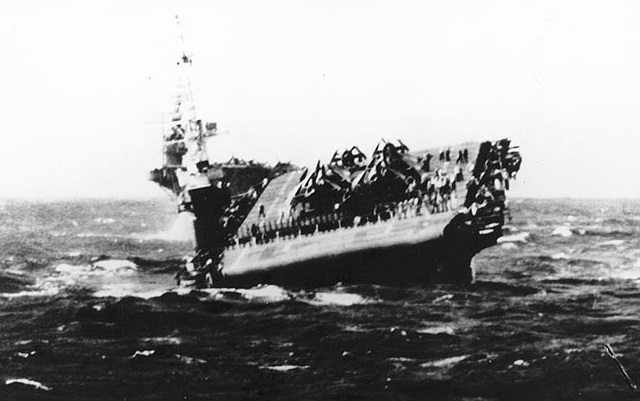 You may also title this "The crew of the USS Lunga Point throws up in unison."

UPDATE.  No, the Lunga Point hasn't broken in half.  Click "more" to see what's going on in the picture! 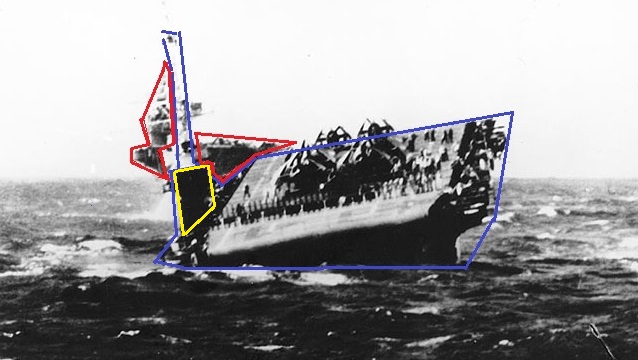 First off, there are two carriers in this picture.  The Lunga Point as a whole is outlined in blue.  Her superstructure is outlined in yellow, and the second carrier is in red.

This is actually one picture in a short series.  There are four carriers running in line, seen here.  You can see that the ships are pitching; the first one in line, identified as the Makin Island, is nosing in herself.

From the same sequence, here's the Lunga Point from a different angle.

She's just taking a big bite of the Pacific Ocean; only an optical illusion makes it look like she's broken apart.  She served for another year after this picture was taken in October of 1945, at which point she was decommissioned and became part of the Pacific Reserve Fleet.  In 1960, she was struck from the Navy list and sold for scrap.

1 I completely don't understand what's going on in that picture. The ship has broken in half and the bow section is capsizing, while the island and stern remain upright? Why aren't the planes sliding off into the water?
Geoffrey Broke's Alarm Starboard (fantastic book) has a v. scary account of a being on a destroyer that nearly capsized in the north Atlantic.

2 Yours is the same reaction the picture got when I posted it elsewhere... and, in fact, mine when I first saw it.

Would it help if I said there are actually two carriers in this picture?

3 ... And the island of the front one is under the water or has fallen off?

4 I couldn't get my mind wrapped around the perspective until this morning.  The brain just isn't prepared for a situation in which a flight deck appears to form a square.