Remember That Torpedo 8 Detachment? The first combat experience of the Grumman TBF (latter named the Avenger) came at the Battle of Midway, with a detachment of planes from Torpedo 8.  We all know how that turned out: five TBFs shot down, and the sixth a flying sieve. 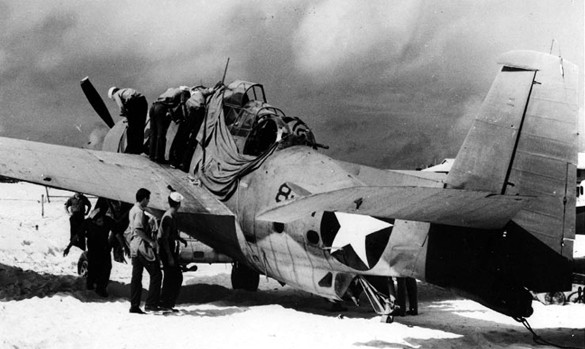 The pilot of the surviving TBF was Ensign Bert Earnest.  He later went on to fight with VT-8 at Guadalcanal.  He retired from the Navy as a Captain.  Along the way, he earned a Purple Heart, two Air Medals, and three Navy Crosses.

Albert K Earnest, CAPT USN (RET) passed away on October 26th at the age of 92.

1 Considering your interest the WW II Pacific theater, I was wondering if you could answer a question that has been nagging at me for years.  I have read several books which state:

Because they had armored decks, British carriers suffered less damage in Kamikaze attacks than the wooden-decked American carriers.

Although I have seen this claim in several books, I have never seen any mention of Pacific battles involving British carriers. Which battles against the Japanese (if any) involved British carriers?

2 Siergen, the Royal Navy participated in the Okinawa campaign and the carrier raids against Japan afterwards.

Their Okinawan contribution was substantial, actually.  While they weren't directly involved in the battle for Okinawa, they were positioned between Formosa and Okinawa, attacking island airfields and making it difficult for the Japanese to reinforce and strike from that direction.

While it's true to an extent that armored flight decks did protect the RN CVs against kamikaze attacks, they had serious drawbacks as well.  The obvious one is the limitation the armored decks placed on the size and number of planes the carriers could embark.  RN CVs carried somewhere between half to 2/3rds as many aircraft as their USN counterparts, and it became very clear that the best defense against the kamikaze wasn't armor, but fighter cover.  Near as I can find, the RN suffered about 75 kamikaze attacks, and had four carriers hit.  The USN had to deal with about 1900 kamikaze attacks... and had four fleet carriers hit.  Having a lot of fighters in the air helped protect the fleet a lot more than the armored decks did.

The other, hidden, cost of the armored flight deck became clear after the war.  RN CVs Formidable and Illustrious were both hit by kamikazes.  Post-war, both carriers suffered fires in their hangars.  The Formidable's was caused when a Corsair fell off an elevator and its guns fired.  The fire was contained entirely within the hangar box, which acted like a furnace.  Her hull was actually deformed by the blaze, resulting in her being scrapped.  This amount of fire damage wouldn't've occurred in the non-armored USN CVs.

In both cases, however, damage surveys a few years later found that the kamikaze impacts caused serious hull stresses previously unexpected.  The armored deck did stop them planes from getting inside the hull, yes, but it also transferred the impact damage to the hull itself.

Even if the later fires hadn't occurred, the two carriers probably would have been scrapped quickly.  Even those armored carriers that didn't have fires onboard were soon scrapped post-war, and in those ships that had been hit by kamikazes, there was varying amounts of hull damage caused by impact shock.

So the armored flight deck worked to an extent, yes, but it had huge drawbacks, too.

By the way, today's Nimitz-class CVNs are technically armored deck carriers, and in theory could suffer the exact same sort of hull damage from missile impacts.  In practice, though, they're so much larger than the WWII-era RN CVs that the threat from such damage is minute: something big enough to cause hull damage to a Nimitz via shock effect would be big enough to cause serious damage conventionally.  Hull shock would be the least of the carrier's worries at that point.

Part of the reason that the RN CVs carried fewer planes is that all the steel used in the armored flight deck weighed a hell of a lot, so the ship simply didn't have enough extra floatation to carry as many planes as a USN CV.

Of course, the only way to find these things out is to try them. And there were experiments tried by the RN that were successful. For instance, they were the ones who found a safe way to land Corsairs on CVs, so they switched over from the Hellcat sooner. (The Hellcat was a fine plane, but the Corsair was better.)

4 Thanks for the very detailed response!  I wonder why the books I've read didn't cover the British involvement at all.  I can understand why some authors chose to concentrate on the bloody invasions and the fire bombing of the Japanese cities at that stage of the war.  However, none of the books I've read covered British naval activities in the Pacific after their loses during the initial Japanese expansion.

There was also a period in 1943 where the US was down to two CVs in the Pacific, and Enterprise was urgently in need of several months in drydock. That left Saratoga the only US CV available for the Solomon area, and by that point it had become amply clear that CVs shouldn't operate alone if it could possibly be avoided.

So the British loaned us HMS Victorious to operate as part of a task force with Sara. (In radio signals, Victorious was referred to as #USS_Robin">USS Robin.)

Well, that was interesting. Here's the URL I intended to link with:

8 I give up. You'll have to search for the article yourself.

10 Siergen, the recent book by Max Hastings, Retribution, gives quite a bit of coverage to the Brits at the end of WWII.  Now, to be clear, he pays more attention to their activities in India, but if my memory serves there's a good bit on their naval contribution.

There's a trade version of Retribution available, and it's well worth the $20 or so it'll cost.  Oh, and ignore the WaPo review on the Amazon page: it tilts so far to the left I'm surprised it didn't cause my monitor to fall over.

11 Thanks again Steve and Wonderduck; I was getting ready to ask for links and book recommendations.  I did find Task Force 57: The British Pacific Fleet, 1944-45, are you familiar with that one?

13 Can't claim that I am, Siergen... looks interesting, though.

14 Churchill was pretty insistent on the British contributing in some fashion - in his history, he mentions several times that he did not want it to be said that the British accepted American help when they were under threat, but didn't reciprocate in helping defeat the Japanese.

That said, the specific contributions they made were somewhat limited - they didn't have a whole lot of naval force in the region, they kept a fleet in the Bay of Bengal, and the time between V-E and V-J didn't leave them enough to get major Atlantic fleet assets into the Pacific. (I didn't get the impression that they were vigorously planning such a move, but a lot of that was a desire not to have British fleet elements wholly dependent on an American supply train.)

Churchill had a lot of good things to say about practically everybody, but curiously, he hardly mentioned MacArthur at all. I got the impression that Churchill didn't have a whole lot of contact with him and didn't have a particularly good opinion of him - there were a couple of exchanges that you could interpret as "yes, we'd be glad to help you out, even if that means our units end up having to coordinate with MacArthur." Honestly, I don't know if there was something specific there - certainly MacArthur had a lot more contact with the Australian government than most American commanders, and since Australia was a Dominion... but no, nothing at all from that.

(Then again, Churchill had actual bad things to say about Australian politics, which cost him a couple of divisions at a time when the British couldn't afford them; it's entirely possible any transfer of antipathy would be going in the other direction! But at the same time, I don't have a lot of use for MacArthur myself - good shogun, lousy general, at least from his WW2 performance.)

MacArthur was actually a pretty good general, or he could be. The military conduct of the New Guinea campaign was very competent and effective; you have to give him credit for that.

MacArthur's problem was that he thought he was better than he really was. That's a pretty serious flaw in a top commander.

I think Churchill's insistence on participating in the Okinawa campaign was completely appropriate.