Name This Mystery Ship XVII The final episode writeup for HSotD is coming along nicely, but it won't be done in time to get posted tonight... so instead, here's a mystery ship! 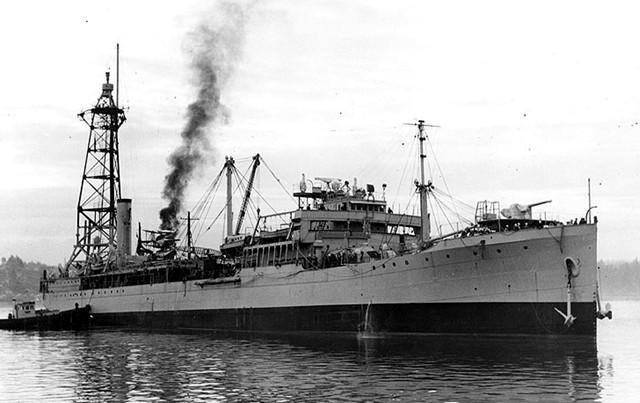 You know the rules.  No image lookup, one guess per person, my judgement is final, winner gets a post on a topic of their choice (no pr0n, religion or politics).  Take your best shot in the comments!  CXT and FDM don't get to play after the two of them basically won everything.  Post no bills.

1 USS Patoka. Ten seconds after thinking "Is that a mooring mast?!"

2 Darn, my usual source of ship photos only lists that ship under "oilers", not "airship tenders".  I never would have found it without the name...

3 Andy gets the laurels this time 'round!  Name your topic, Andy.  Siergen, it IS an oiler... that happens to have another job.

only lists that ship under "oilers", not "airship tenders".

Small wonder, since PATOKA kept her hull designation as a fleet oiler even after she was converted to dock and support the ZRs.  She only changed her designation later when she was assigned as a seaplane tender for a short while.

I have been watching Accel World when the photo was posted so Andy had already answered the question before I could read who could participate.

5 Hmm. Can you do a "Mystery Airplane" post? That might be a different sort of challenge. If not, another ship would be fine.

(I found it via the Wikipedia page for "Mooring mast" -- it has a pic of USS Shenandoah moored to the ship.)