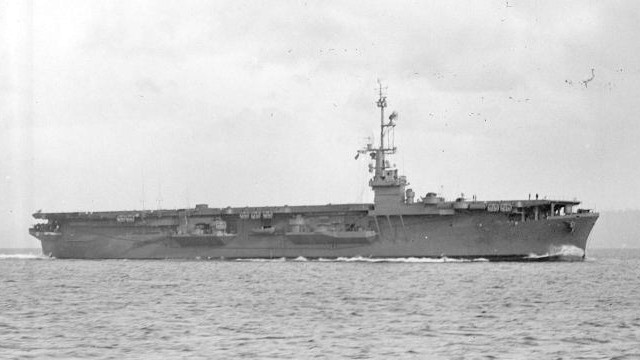 Get it right, and you will gain the people's ovation and fame forever.  Get it wrong, and... uhm... nothing will happen.  So there!

UPDATE: Since nobody's gotten it yet, I'll just give the answer.  The ship pictured is CVE-123, the USS Tinian.  She was completed in just under six months, and was launched in September 1945.  She was never actually comissioned, sailing right from acceptance trials into the Pacific Reserve Fleet where she sat until 1970.  She was struck from the list on June 1st, 1970, and sold for scrap 18 months later.  The Tinian had never been a US Navy warship.

1 I am going to do another wag, a CVE? There were so many CVE's built that I cannot even start to guess a name.  Some of the ones transferred to Great Britain muddy the guessing even further.

4 I'm cheating (looking at Wikipedia), so if I'm right I don't win anything. It looks like it's a member of the Commencement Bay class.

5 There's nothing to win this time around, Steven, but it is indeed a member of the Commencement Bay class.

Odd.  IIRC, if she was never comissioned, she should not have gotten an 'USS' prefix.

8 I wondered about that as well.  She was named at her launching, it appears, and I suppose the USS was simply applied at that time.

9 So apparently what's distinctive about her is that she's the last CVE ever built.

10 Yes, and I meant to put that in the "Update" and completely whiffed on it.  Being on vacation is relaxing, but it dulls the brain.