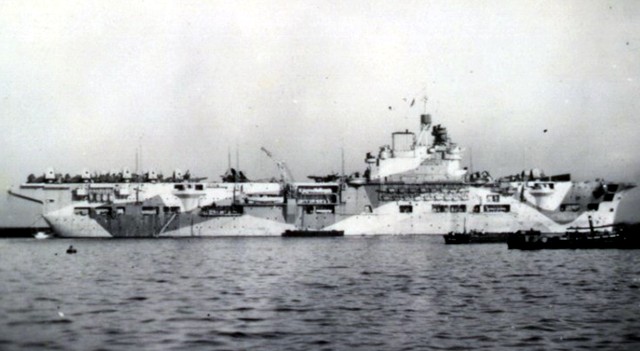 Again, no clues, no hints.  Winner gets a post of their very own!

C'mon folks, let's not let flatdarkmars have all the fun!

1 I'm pretty sure it isn't American, because the US never used "dazzle" paint on their carriers. I'm working on it as being British.

And then my googling turns up lots of pictures of US carriers in dazzle paint. Oh, well. I think I know what it is, but I'm cheating so I can't win.

3 I will neither confirm nor deny your working theory, Steven, but I do want to point out that the US Navy did use "dazzle" paint on their CVs... for example, the Essex-class Hornet.

7 I seem to have outsmarted myself.

8 When I was in Air Force intel school, they gave us a mnemonic for a method of IDing ships.  Similar to the WEFT method for aircraft recognition (wings-engine-fuselage-tail), it gave you the main features to look for and compare when trying to ID the target.

I'm pretty sure that the ship mnemonic was MAST.  However, I'm damned if I can remember what all the letters stood for...  Main hull-Armament-Superstructure and T____?  I haven't been able to find the MAST method on the internet either.

Like Steven, I first checked the escort carriers, but that overhang at the stern and the size/shape of the island didn't match.  I then checked the US light carriers; these looked similar in overall size, but again the shape of the stern was wrong.

Then I checked the aircraft on the aft flight deck.  Those sure looked like roundels on the wings, and the US Navy started painting the bottoms of their carrier planes dark blue fairly soon after Midway, as I recall.  That led me to the Brits.

9 Damn Siergen beat me to it, I recognised HMS Unicorn straight away. She was built as a maintenance carrier but ended up being the inspiration for the colossus and majestic class light carriers, some of which were still in use in the 90's