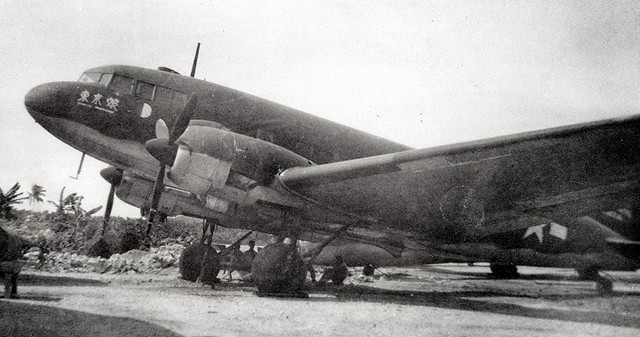 No hints, no clues, no cheating.

It is a Japanese L2D, a licensed and modified version of the DC-3/C-47.

3 It's got an American white star-and-bar painted on it. If it was Japanese it would have a meatball.

4 CXT wins, it is indeed a Showa L2D; the particular plane shown in the picture was captured in the Philippines, which explains the US national symbol.

However, I'm very curious as to how CXT knew the difference, as the only visible alteration that I could see between the C-47 and the L2D is in the tail... and you can't see that in this picture.

5 Actually it's an L2D - Japanese-made licensed derivative of DC-3. Look at the extra glazing behind the cockpit and the engine cowls. It must be a trophy or something that ended in U.S. inventory somehow. The question is not to determine the type, it's to guess what this unit was. Note the nose art that possibly says "東京祭", that may be a clue about the history of the unit.

6 Pete, that answer was already given: see my comment directly above yours.  The nose-art translates to "Tokyo Express."

My 'logic' went as follows - the plane looked like a C-47, but something felt off about it AND the characters at the nose gave me a general location.  It did not have the insignia of the Nationalists/KMT/ROC.  The only other nation that operated C-47/DC-3 and variants in Asia that would be of interest was the Japanese, who had their own license to build their own version.

However, as Wonderduck noted, the most telling feature to determine whether it was a C-47/DC-3 or L2D is hidden by the angle of the photo.  That would have been an immediate give-away.

Also is Pete is correct about the extra windows in the cockpit.  In retrospect, that was the first thing about the plane that made it look 'off' to me, though it took me a while to realize exactly what.

11 Oh god, Pete, you just made my mind go there...  There's not enough brain bleach in the world to wipe out the image of the first C-47 Cargo Strike Witch....