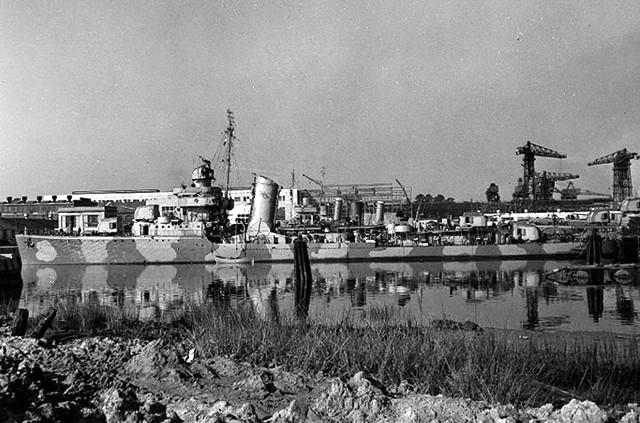 No hints, no clues save one: she came to a tragic end.

The first person to guess correctly will win a post on a topic of their choice.  Leave your guess in the comments!

UPDATE: Reader flatdarkmars wins the contest, and has requested another "name that ship/plane/waffleiron/whatever" post.  Look for that to come soon!

1 Ship recognition is not my strong suit.  I was going to guess the USS Hammann, but the port holes in the bow look wrong.  How about the USS Warrington DD-383?

2 That's certainly a strange configuration for a ship. But it's a bit hard to tell for sure because I'm having a hard time telling what's the ship, and what's on the shore behind it.

3 Siergen got it right the first time.  DD-412 Hammann.  Fourth picture from the top:

4 Really?  What happened to the row of portholes on the bow, halfway between the waterline and the main deck?

Did they weld the port holes over later on?

Now as to that "a topic of their choice", you'll write a post about anything?  I'll have to ponder that a bit.  With great power, comes great responsibility...

5 D'oh!  I just realized that flatdarkmars is the one who said my first guess was right, not Wonderduck.  I think I may need to get new reading glasses...

Siergen: that would be my guess.  Given that US Navy did the same to other ships in the early days of Big Mistake #2, it would hard to imagine her not receiving the modification.

The 'snake-skin' type paint scheme was a bit unusual for US ships even during WW2, but there is a photo of a destroyer with similar paint scheme in Richard Frank's Guadacanal.