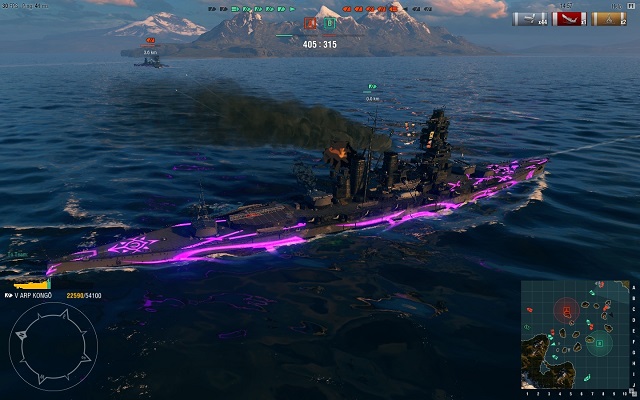 So as near as I can tell, the Fleet of Fog vessels in World of Warships are simply supercharged versions of their non-FoF counterparts.  Lord knows the guns sure seem to have an extra punch as they turned me into cottage cheese in no time flat.  Non-players of the game might have missed it, but y'all take a close look at the harbor my St Louis is in... it might look awfully familiar.

It's an enjoyable enough game, but I'm not sure if it's really catching my fancy.  If it was more "realistic", I could see myself going crazy-go-nuts over it, but the arcadey gameplay is a turnoff.  Maybe if I was any good at the game it'd make a difference.  Heh.  As-is, I have no idea how to make it more realistic without making each match hours long, but I'm no game designer.

For which fact we should all be grateful.

1 Note that only players who switch to the special port can see the Fleet of Fog camo. Everyone else sees the standard ship.  I've been trying to get to that, but I haven't seen the definitive list of which ships are participating. So I don't think the stats are necessarily different.

2 I believe it's only Kongo and Myoko that have special Arpeggio schemes.

3 So no Klein Field?

4 No Klein Field.  No corrosive torpedoes.  No mental models.  No paper-thin characterizations of everybody that isn't Iona or Gunsou.  Just a very big ship with very big guns.

Will, don't forget about the new Kamikaze-class destroyer.

They couldn't really bring Fleet-of-Fog ships into the system and make them accurate to the series, because a single FoF cruiser (say, a Nagara) could wipe out everything that isn't FoF. The Fog destroyed the entire 21st Century fleets of Japan and the US with no FoF losses, and presumably the 21st Century Earth fleets were drastically better than anything in WOWS.

Anyway, FoF livery for Kongou can't be accurate unless there's a stern looking blonde wearing an evening gown standing on top of the pagoda.

6 Well, we'll never know... nobody's ever gotten close enough to a FoF Kongo to check without being blown into their component atoms.

7 The Kamikaze R event is a different ball of wax. You gotta go to the page, sign up, then you earn "pearls" through missions you can spend opening boxes, culminating in probably not winning the ship itself. (But there's "free" boxes that will give you 10 of each flag and about 800k in credits, so if you're playing, sign up and get the free stuffs?)

8 I was a bit disappointed to find that the event is past all but the last milestone, and I hadn't heard about it.

9 Well, it's not the Fleet of Fog, but WoWS' April Fools gag last year was pretty amusing. I wish I'd had access at the time.

10 Seems to be a Wargaming tradition. Look up World of Tanks videos featuring the "Karl", a Tier 1 Premium tank with a 600 mm gun....