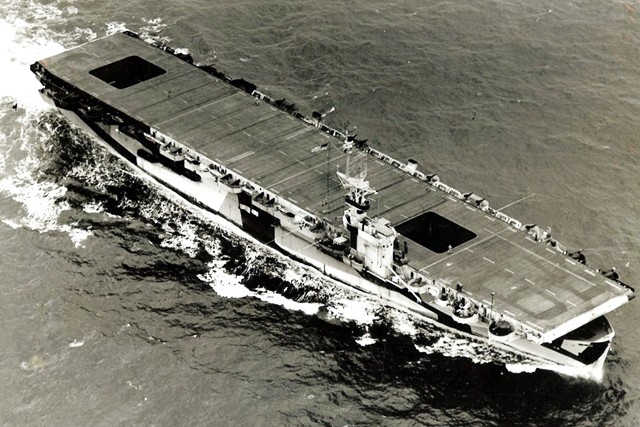 The USS Ommaney Bay (CVE-79) was the twenty-fifth of the fifty Casablanca-class escort carrier built.  Constructed in just over two months by the Kaiser Company shipyard in Vancouver, WA, she weighed in at just over 10000 tons at full load.  At full steam, she could move her crew of 860 men and the embarked "composite wing" of 28 planes at 19kts.  Like most other escort carriers, she wasn't designed to fight with the fleet.  Instead, CVEs were to be used first as stopgaps, then when bigger carriers became available, to free up the more capable CVs and CVLs to hunt for bigger targets.  In effect, the CVE became a air support unit, providing air cover for amphibious landings.  It was in this role that she was off Leyte as part of Taffy 2 when Admiral Kurita's fleet famously attacked Taffy 3.  Ommaney Bay helped sink one of the Japanese cruisers and aided in the defeat of the larger Japanese force.  And it was in the air support role that the Ommaney Bay was going to serve as she transited the Sulu Sea.

Then the kamikazes came. 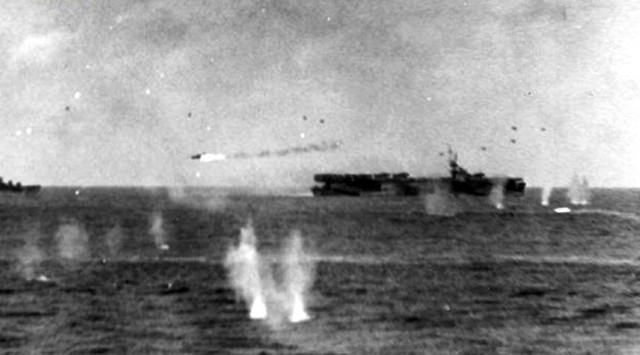 The Ommaney Bay carried eight twin-mounted 40mm Bofors cannon and twenty single-mount 20mm Oerlikon guns for air defense.  The other ships in the Sulu Sea with her added their own fire support, and managed to shoot down or drive off a number of the attacking land-based Imperial Japanese Navy airplanes.  One Yokosuka P1Y Ginga (Allied reporting name: Frances) dove on the "Big O", releasing two bombs.  The plane grazed the island, then cartwheeled into the ship's starboard side.  The two bombs, however, caused the real damage.  One penetrated all the way through the hangar bay and exploded on the starboard side; this had the effect of ruining the ship's fire mains.  One of the reasons the Kaiser shipyards could build CVEs and Liberty Ships so quickly and cheaply was that they cut corners whenever possible.  The fire mains were made out of fragile cast iron instead of the steel pipe used in the bigger fleet carriers, and thus more susceptible to damage.  This was considered acceptable, for a CVE was never expected to face much in the way of enemy action.  The other bomb punched through the flight deck and exploded amongst fueled and armed planes in the forward part of the hangar deck. 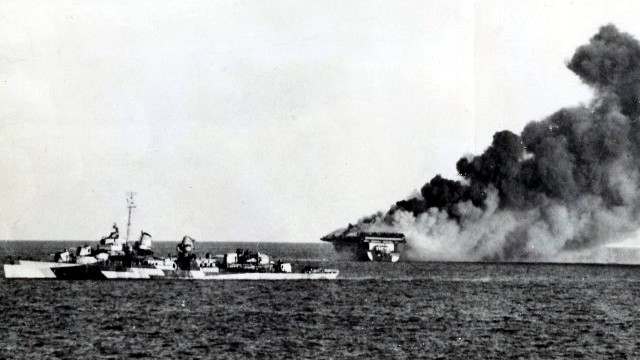 Almost immediately, the Ommaney Bay was in serious trouble.  With no water pressure available to fight the blazing fires in the hangar bay, no bridge communications and limited-to-no power, the inferno quickly spread.  Ammunition in the airplanes began to cook off, driving the firefighting crew from the hangar. 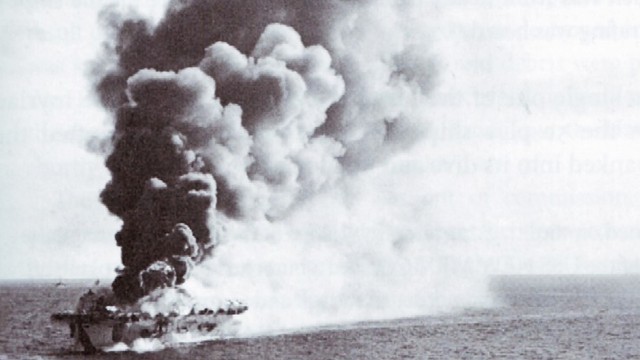 The fires soon ate through the forward flight deck, rendering the whole of the upper surfaces of the ship uninhabitable.  Adding to the danger was that in the Casablanca-class of CVE, aerial torpedoes were stored just below the hangar deck, and could explode at any time.  Abandon ship was called around 5pm, just a short time after the attack took place.  While the escorting destroyers were about to finish the task of taking the crew off, torpedo warheads began to cook off, killing two sailors on one destroyer.

With no hope of saving the blazing Ommaney Bay, the USS Burns launched one torpedo into her side, sending her to the bottom with 93 of her crew.  The date was January 4th, 1945, 67 years ago.

1 Hmm. I never thought about a local shipyard having contributed to the WWII Pacific fleet... to the Wikipedia!

2 The three Kaiser yards in the Columbia River area weren't the big ones in the company (the four SF yards held that honor), but they still could crank out the ships... at least "smaller" ones.

3 A family friend served on the Guadalcanal.  I've never had much of an opportunity to talk to him about it, but he let me look through his "cruise book", and asked me to restore the print of the carrier on the cover.

IIRC Kaiser also had shipyards at Swan Island in the Willamette in Portland. (Which is misnamed because it isn't really an island.)

5 Well, that was kind of the point of escort carriers. If we insisted on fleet-carrier quality, then we'd get fleet carriers... but only a handful of them, which would generally be elsewhere (and require a screen of their own, of course). Escort carriers were cheap enough that you could afford to park them with the transports while the invasion came along... or lose half a dozen and not significantly change the strategic outlook of the war.

So the question is, what would a modern CVE look like? Converted merchant ship with a drone payload? Build enough of those and things could get scary...

6 A modern CVE would be a helicopter carrier.

7 More along the lines of a modified Atlantic Conveyor, if we follow the original RN's original concept for escort carriers.

8 Considering the fate of the Atlantic Conveyor, that's not a happy thought.

9 The fate of the Atlantic Conveyor wasn't that dissimilar from that of the Ommaney Bay.  Maybe it's a better comparison than we think (and I think it's a pretty good one).

10 At least Ommaney Bay could attempt to defend herself - one of the reasons Atlantic Conveyor was sunk was because she lacked passive or active defenses (Due to time, priorities, and whether an auxilary could be armed - as well as the Harriers she carried being transferred, as planned, to Hermes and Invincible.).  Otherwise, as Wonderduck says, she fitted the escort carrier concept pretty well, especially as a mobilization design that can go into service very, very quickly (Which almost all modern warships can not.).

11 As it turned out, a container ship makes a wonderful auxiliary carrier.  Now, one might question the wisdom of putting the entire aerial component of your land forces on one incredibly juicy soft target, but nobody can question that the use of the Atlantic Conveyor in the AVG role worked brilliantly.

Until it took two Exocets into its merchy hull, that is.

12 To be fair, it's easy to question the wisdom of a lot of things that were done in the Falklands. They're really, really lucky not to have lost Canberra...

13 The Atlantic Conveyor was a very austere version of the A.R.A.P.A.H.O. concept developed jointly between the US and the Brits in the '70s. The concept called for a ski jump and 2-4 point defence systems. (seawolf in the UK version) The idea was to store dozens of kits so that container ships could quickly be converted to mini carriers. As far as I know the kits were never made and Atlantic Conveyor was put together pretty much on the fly.

I think the Atlantic Conveyor is actually closer to a MAC than a CVE.

14 My father, Joseph J. Grass was on the Ommaney Bay from commissioning until she was sunk.

15 I hope he continued his naval career afterwards!