August 14, 1945 66 years ago today, Japan surrendered to the Allies, thus bringing an end to World War II.  The official ceremony wasn't conducted until September 2nd, and that's the day that we celebrate here in the US as the end of hostilities, August 14th was the date that the the announcement was made to the Japanese people.  August 14th was also the date the second-most famous photograph from the Pacific War was taken. 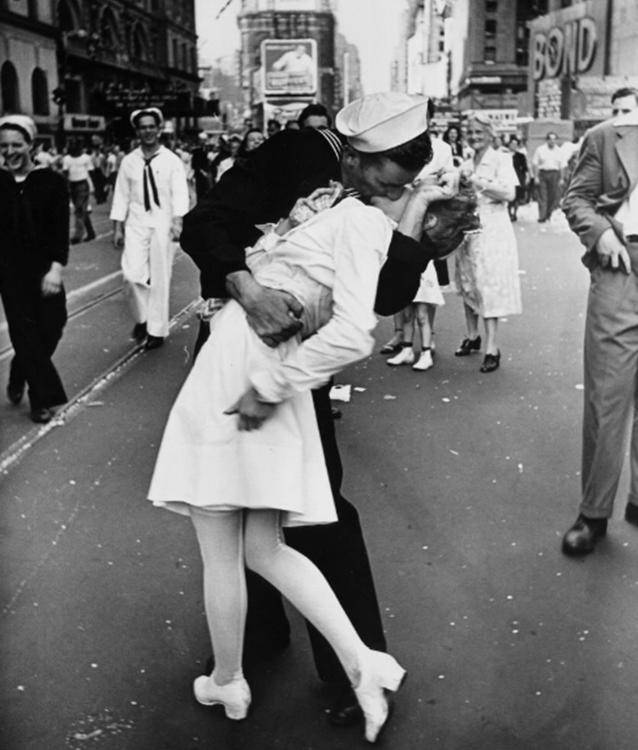 I wonder what the following 19 days were like for those on the front lines of the war.  Hostilities had ended, but it wasn't official yet... and surely nobody wanted to be the last casualty of WWII.

1 Nobody on our side. A not-insignificant portion of the Japanese high command committed suicide. One of them declared his intention to "live on in the noble spirit of the special attack" (think I'm quoting that right, anyway), hopped in a plane, and headed east, never to be heard from again. Certainly he didn't hit anyone.

The Japanese were pretty worried that some other hothead would decide to do something similar to MacArthur's fleet when it arrived. They went so far as to take all the propellers off the planes to prevent any last-minute stupidity.

3 Not my phrase, was the one they used in Downfall. Granted that of course he was army and not in direct command of the naval vessels, but he was the one who'd been instructed to accept the surrender and to head up the occupation. And for all his many failings as a general, I don't know that we could have found a better man for that role.

Sadly, it was a fairly insignificant number of the Japanese high command who decided to die with honor - Dr. Edward Drea records that out of 1500 IJA generals, only 22 committed suicide. My read on the proportion of suicides in the IJN is fairly similar.  Too many of the rest were trying to destroy documents, or following the example of the Japanese foreign minister, trying to use the dropping of the atomic bombs to divert attention from Japanese atrocities and war crimes against Allied POWs and civilians (Allied and Asians.).

Some of them probably had second thoughts about not taking the honorably way out when it was their turn to face the hangman later on (Like the Japanese admiral commanding the Wake Island garrison, who found his attempt at covering up his war crimes to have failed utterly.).

Sorry, Avatar, but MacArthur is a sore spot for me.

MacArthur had the same virtues and flaws as Patton and Montgomery. All of them really were great battlefield commanders. All of them were charismatic, great leaders of men.

And all of them were deeply flawed because of their towering egos. You compare them to men who didn't have that kind of ego problems, like Nimitz and Bradley, and you can see that it wasn't an essential part of the makeup of great leaders.

MacArthur's ego made him do stupid things. It ultimately led to him being relieved in Korea by Truman, and if anything Truman was preternaturally patient with the man and put that off. (And Ridgway, who took over, actually fought a smarter and more effective war than MacArthur had.)

His campaign in New Guinea was by all accounts brilliant, considering his terrible logistics and the beastly conditions, and in fact the ground operations during the reconquest of Luzon etc were brilliant, too. But the man simply wouldn't keep his mouth shut.

And I have to give him credit for his performance during the post-war occupation of Japan. There were so many things he did well; but his flaws and his mistakes just stick in my craw.

Referring to it as "MacArthur's fleet" seems typical, because MacArthur was a glory hound and it would have been in character for him to take credit for that.

6 Don't get me wrong, I'm no more of a Mac lover than you are. I don't even really give him the credit for generalship. The histories I've read generally credit him for bungling the defense of the Philippines (not that they expected him to hold it, to be sure, but his defensive plans ensured that most of the troops ended up in Bataan with most of the supplies outside it, and were responsible for a good amount of the misery the soldiers suffered.) They weren't any kinder to him when it came to the crossing of the Owen Stanley range ("reminiscent of the worst generalship of the First World War", one wrote).

I'll grant that he knew how to use amphibious landings to his advantage. But his actual generalship wasn't any better than indifferent, at least not until later in the war, by which point he was facing isolated Japanese outposts that he could bypass when necessary. And his political interference simply had no place in the proper conduct of an officer. There's also the matter of all that Filipino money that he ended up with...