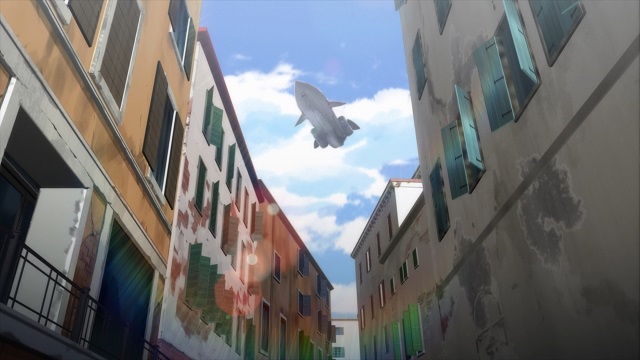 -ARIA the Avvenire, Ep01
I'm finding myself reluctant to write the review of the first of three new ARIA episodes.  Not because I don't want to, but because of how much I love the series.  Watching this special episode, particularly after years of thinking I'd never get to spend more time with these characters, was an intensely personal experience.  Don't worry, I will do it, I'm just trying to figure out how to make it feel right without gushing.

If you're a fan of ARIA, you should have watched it by now.  If you've never seen the franchise, this is a good time to start watching.  If you're NOT a fan of ARIA... well... um...

I welcome all sorts of people to The Pond.  Some of my best friends don't like Azumanga Daioh, for example.  I'd like to think I'm open-minded enough that I could get along with someone who doesn't like calm, peaceful stories about female gondolieri on Mars.

Sorry. I abase myself.

I liked the first series. I loved it. But I only got10 episodes into the second one and then I quit. Here's what I wrote:

I really loved Aria, the Animation. It was like meeting the beautiful girl of my dreams and falling in love with her.

Aria the Natural was like the first time I visited the family of the girl of my dreams, and found out that the father was an alky, the mother was a cranky old lady who smoked, and the kid sister was a slut who wore too much makeup and did drugs.

Neo-Venezia in the first series was a magical place, a place of wonder, a city as designed by the Disney corporation. It felt like it was part of the Magic Kingdom. Neo-Venezia in the second series wasn't as nice. There were cobwebs in the corner. There were dark shadows where something spooky seemed to be moving when I wasn't looking directly at them. There were ruined places, abandoned buildings with broken windows.

And I became increasingly uncomfortable spending time with Alicia. She was my least favorite character in the original series, too, but she was tolerable. In the second series she started to grate really badly.

I got to episode 10 and finally admitted to myself that I wasn't having fun anymore.

2 There were ruined places, abandoned buildings with broken windows.

3 Maybe so. I didn't remember it that way.

4 I didn't remember it that way.

I meant that literally, by the way.  In at least two episodes (one in S2, one in S3), that occurs.